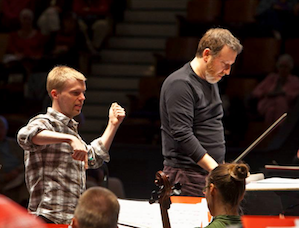 Upbeat and Unstuck at Cabrillo Festival

Saturday night’s concert at the Cabrillo Festival, called Unstuck after composer Andrew Norman’s leadoff piece, was a typical Cabrillo concert: three upbeat, energetic orchestral works, two of them by younger composers, one by a veteran. Conductor Brad Lubman took over this program, following Music Director Marin Alsop’s withdrawal after a hand injury last month. He brought to the concert very much the same kind of energy, enthusiasm, and sheer musical ability as Alsop, and did a bang-up job with the orchestra.

At no more than 10 or 12 minutes, Norman’s colorful single-movement Unstuck, for a rather large orchestra, still has the feel of a multi-movement work. The framing outer sections are louder and faster, not unlike many large-scale multi-movement works. In between, a section that initially feels slower and more contemplative manages to proceed at both slow and fast tempos. Norman achieves this effect by dividing up the orchestra so that some sections have longer note values and more drawn-out themes, while others skitter around.

The composer also makes excellent use of some serial-style melodic fragments that exploit the extremes of various instruments’ ranges. In addition, various fragments appear and reappear unexpectedly as Unstuck proceeds, and as it starts, winds down and restarts, winds down, restarts, and finally closes. Like Norman’s Gran Turismo at the 2011 Cabrillo Festival, Unstuck left me wanting to hear more and longer works from this very talented composer.

Collecting Data for a Concerto 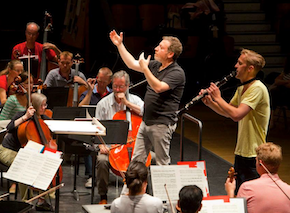 Enrico Chapela’s Magnetar, a concerto for electric cello, was commissioned by the Los Angeles Philharmonic, the City of Birmingham Symphony Orchestra, and the São Paulo Symphony Orchestra for the German-Canadian cellist Johannes Moser. As Moser recounted the story before Saturday’s performance, he and the LAPO exchanged lists of possible composers and Chapela was on both, a happy coincidence.

A magnetar is a rare type of pulsar that produces the largest magnetic fields in the universe. Before composing this concerto, Chapela consulted a pair of astrophysicists, one of whom provided him with data derived from observations of three magnetars. This data was the basis for some of the musical materials in the concerto. Chapela, a guitarist, improvised the draft of the cello part on an electric guitar from which he had removed two strings; then he collaborated with Moser on the final version of the cello part.

Besides being amplified — the electric cello is a fingerboard with no sound box or other resonator — the cello’s sound is heavily processed during the concerto. Sometimes it wails like an electric guitar, with wah-wah pedal or fuzz layered over its (comparatively) natural sound. Sometimes the cello sounded rather like a whale, conjuring up George Crumb’s landmark Vox Balaenae. And sometimes sounds made by orchestra members clapping or rubbing their hands together were also mutated and processed and worked into the orchestral fabric.

Chapela’s notes say that the three contrasting movements are fast, slow, and brutal. In all three movements, there’s an improvisatory feel, undoubtedly a result of the genesis of the solo part; the cadenza between the first and second movement is nearly seamlessly worked in with those movements. The lyrical slow movement is relaxed and jazzy, with some sinuous North African and tango notes and the cello given the voice of a ‘40s Hollywood torch singer.

That allegedly brutal third movement really isn’t very brutal, as Chapela’s musical language isn’t harmonically harsh and this concerto isn’t overwhelming loud. There’s some thumping repetition, which is exciting enough, but the movement has more of a North African feel, again, or even the feel of a lusty tarantella, than anything truly brutal.

All in all, Magnetar is a big, boisterous, crowd-pleasing, and very attractive work, well-crafted and beautifully performed by both orchestra and cellist. Moser’s playing and style were well in synch with Chapela’s writing and the improvisatory spirit of much of the work; his phrasing is free and spontaneous, his bowing sure.

The second half of the program was given over entirely to Philip Glass’s Symphony No. 10, which is partly based on the earlier Black & White Scherzo, commissioned by the Cabrillo Festival and first performed at Cabrillo with Maestro Alsop at the helm.

What to say? This five-movement work got an enormous round of applause at its close, and during the last movement, at least one audience member was waving his arms around and swaying in time to the music as if at a rock or jazz concert. This work has a fair number of engaging moments (and far fewer arpeggios than a typical work by Glass), among them the oceanic swelling of the second movement and the imaginative treatment of the percussion in the last movement. Still, it also has an abrupt and even perfunctory feel. Three movements inexplicably end in dead stops at seemingly random moments, with no structural or melodic signals that the end is near.

Three of the movements sound as though Glass was attempting to compose a set of variations, but the movements are all quite short, robbing them of any chance to develop the kind of range and power possible in a truly great set of variations. It is almost like a deconstruction of the idea of variation, but to little effect. By the end of the fifth movement, you had to wonder whether Glass had simply run out of ideas.