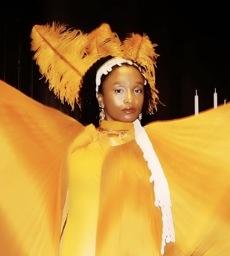 Henry Purcell, composer of some 800 cataloged works, never wrote an opera titled The Witch of Endor, so the question arose as to what, exactly, Urban Opera would be performing over Halloween weekend. The answer turned out to be something perhaps closer to a masque than an opera, a number of works by Purcell and others assembled for a performance equal in musical brilliance and theatrical flair to the company’s inaugural production of Purcell’s Dido and Aeneas.

The composer’s operatic scene In Guilty Night, written around 1692, is the foundation of the production. It recounts a Biblical episode in which King Saul, who has driven all magicians from the Kingdom of Israel, goes to the last remaining witch and begs her to call up the spirit of the prophet Samuel for advice on how to defeat the Philistines, who are about to attack Saul’s country. The scene is just 10 or 12 minutes long, but fortunately Purcell’s vast output provided plenty of other suitable music to flesh out The Witch of Endor. Urban Opera incorporated instrumental music from King Arthur, Abdelazar, the Sonata 5 in A Minor, Z. 794, and The Indian Queen, as well as the aria “Seek not to Know” from The Indian Queen and an arrangement for solo tenor of the incomplete choral setting “Hear My Prayer.”

Like Dido, The Witch of Endor was designed for performance in a particular location, in this case the exquisite Episcopal Church of St. Mary the Virgin, where company Director and Conductor E. E. “Chip” Grant IV is the director of music. The production, which makes grand use of the tiny church and its environs, opened in the church courtyard with an enthralling recitation of Kipling’s poem En-Dor by a ragged man who had seemingly wandered in from the street — in truth, the playwright and actor Gary Graves. The same reading closed the production. The Goddess of Dreams, with whom Saul consults before turning to the Witch, sang from the second-floor gallery, and the ghost of Samuel sang his first phrases, spookily, from behind closed doors at the rear of the church before advancing slowly down the center aisle.

The balance of the action, including a small battle, Saul’s coronation, his encounter with the Witch, and a haunting montage of war films and still images from all eras, played at the front of the church. They used a film projector for the montage, and when was the last time you heard the click and whir of a projector? The orchestra of five strings, harpsichord, and organ was placed right in front of the altar, the large and excellent chorus seated in the choir stalls between the “stage” and the orchestra.

The production’s musical virtues matched the imaginative staging. That pint-sized orchestra played with style, precision, and beauty of tone, sounding more like a 15-piece chamber orchestra than an enhanced string quartet, with the excellent Steve Repasky on harpsichord and organ. Conductor Chip Grant was barely visible among the musicians; every tempo was just right and balances were excellent throughout. Shawnette Sulker starred as the Witch, singing her roulades with a bright, flexible lyric soprano and portraying the part with calm nobility. Tenor Colby Roberts made a Saul by turns impassioned and tender. Bass John Minagro’s dignified Samuel easily dominated the church and Saul. Soprano Lindsey McLennan’s big, vibrant voice suited the Goddess of Dreams well but her wide, slow vibrato would likely be at its best in a larger space.

The Rev. Dr. Jason Parkin, Rector of St. Mary the Virgin, read the story of the Witch, as told in 1 Samuel 28:3-20a, in a most marvelously sonorous and rapt tone and with beautiful diction. If only there had been text inserts for the musical numbers, as the singers’ enunciation left a good deal to be desired.

On the anniversary of its debut, Urban Opera has again put on a striking and original production, demonstrating that great art doesn’t require big budgets, only a vivid imagination. I hope we won’t have to wait another year for their next outing.