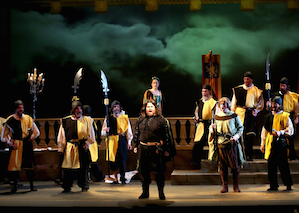 General Director José Luis Moscovich has taken this epitome of operatic excitement, which pulses with irresistible rhythms and enchants with glorious melodies, and pulled it together in a virtually flawless performance. On Sunday, the audience was swept away in three hours of superb opera, climaxing in a finale that made you forget that it's not Verdi at his best musically.

By "audience" I mean both myself — a veteran of dozens of live performances and many more recorded experiences — and a remarkable first-timer, a 9-year-old girl so taken with the music she had to be politely asked to stopped tapping her feet, and then paid rapt attention all the way through.

By "virtually flawless" I mean some technical flubs, unusual at West Bay: the performance paused twice in the middle of action, waiting for somebody to appear or start singing, and — worse — projections flashing by on the upstage wall without rhyme or reason. This, of course, can happen at the biggest companies, but not expected at usually well run West Bay Opera.

Still, that's just nitpicking in order not to gush excessively about this miracle of "regional opera" that you really have to experience in person in order to appreciate fully.

Moscovich was a force of nature, conducting the small orchestra in Bryan Higgins's reduced score. The violins (all five of them) sounded a bit thin at the beginning, but in the consistently excellent balance the conductor otherwise maintained, such observations eventually disappeared. In one striking instance, Moscovich, who never allows the orchestra overwhelm the singers, increased the volume from the pit in a split second to cover the somewhat uncertain high C at the end of "Di quella pira."

And there, in a single exception to tenor James Callon's remarkable performance in a challenging role, is the pointer to Moscovich's other remarkable virtue: casting. In that tricky business, often plaguing the biggest, richest opera companies, West Bay presents good-to-excellent, mostly young singers production after production.

Even against that background, all four principals in Il trovatore made the company proud. Three well-known singers in the Bay Area, and a newcomer to West Bay performed at the highest standard.

Callon, from Los Angeles, sang Manrico with powerful chest voice and excellent high notes, vocally and dramatically invested in the title role. The object of the troubadour's affection, Leonora, is soprano Cynthia Clayton, who has made a name for herself locally with such acclaimed appearances as the title role of Susanna with Festival Opera. I have never heard her in a more modulated, shaded, appealing performance than in arias and duets on Sunday.

Patrice Houston comes from the same busy and successful background; the mezzo's Azucena in the Lucie Stern Theatre was impressive, solid, resisting the temptation to oversing and overdo. With the relative mismatch of the small theater and Houston's big voice, it would have been easy to shake the rafters, but that's not what the music calls for, and it didn't happen.

Krassen Karagiozov's Count Luna was solid and appealing, the beauty of his voice counteracting the character's bad-dude role.

It takes an effort to find the name of the chorus master in the program, but Bruce Olstad should be acknowledged, along with the small but powerful chorus; the men were especially impressive, and in one notable instance the women's voices came to the fore. Igor Vieira's stage direction and Jean Francois Revon's sets were fine, but Lisa Lutkenhouse Lowe's costumes were the big winners — the principals' splendid outfits made for the occasion, chorus costumes a mix of homemade and rentals.

Last but not least, about the hoopoe. Yes, the crested Old World bird with a slender downward-curved bill, not present in the Americas. Until today, I didn't know about the bird, much less its appearance in Il trovatore. But there it is, as a possible guise for Azucena as a witch, "In upupa o strige talora si muta!" — "Sometimes she changes into a hoopoe or an owl!"

What of it? The hoopoe exemplifies perfectly Moscovich's attention to detail and his drive to communicate. Besides the way he makes the music speak, emphasis on diction, supertitles in extra-large, easy-to-read display, it's Moscovich, who calls attention to a bizarre bird I never noticed before, however many times seeing and hearing the opera.

At his usual entertaining (and money-raising) appearance before the performance, he showed a picture of the hoopoe, and imitated its sound. You don't get that kind of attention to detail at the Metropolitan Opera... nor the cost-benefit ratio Moscovich produces with his little/big company.