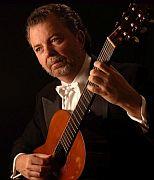 Versatility of a Master Guitarist

Scott Cmiel on March 18, 2008
Manuel Barrueco has been known as one of the world’s foremost classical guitarists since 1974, when, at 22, he became the first guitarist to win the Concert Artists Guild Award. Since then, his reputation has continued to grow. A large and enthusiastic audience was on hand on Saturday at Herbst Theatre to hear his substantial program, presented by San Francisco Performances and the Omni Foundation for the Performing Arts. Johann Sebastian Bach’s Three Sonatas for Solo Violin use a single melodic line to create the illusion of a full harmonic and contrapuntal texture, suggesting an interplay of independent voices — a technique originally developed by lute composers and perfectly suited to the guitar. The four-movement Sonata in G Minor, BWV 1001, begins with an elaborate Adagio. Opening movements of Baroque instrumental works before Bach were frequently improvised, and Barrueco captured that spontaneity with elaborate arpeggiation, exquisite ornamentation, and rhythmic flexibility, without sacrificing the power and clarity of Bach’s carefully organized tonal structure. The profound Fuga has a terse subject and a complex texture. Barrueco clearly articulated each subject entrance while continually heightening the musical interest by emphasizing Bach’s marvelously varied treatment of rhythm, harmony, counterpoint, and texture. The lilting Siciliano lightened the serious tone that prevailed in the other movements. In the concluding Presto, Barrueco exuberantly emphasized the constantly changing rhythmic patterns, and reveled in Bach’s rich melodic invention.

The evening’s highlight was the San Francisco premiere of Astor Piazzolla’s Tango Etudes, arranged for guitar by Barrueco. Piazzolla was a composer and performer inspired by the traditional Argentine tango who used the influences of 19th-century opera, jazz, and 20th-century classical composers to create a more urgent, passionate extension of the genre. Among his many compositions, Piazzolla wrote five tangos for solo guitar, a suite for flute and guitar, and a suite for guitar duo. Tango Etudes, originally written for solo flute, must have been unusually challenging to arrange. Guitarists frequently rearrange music written for piano, removing notes from the score that can’t be played on the guitar without harming the natural flow of the music. The challenge in arranging music for solo flute is to add all that one suspects is implied, while trying to sound like the original composer. I haven’t yet heard the Tango Etudes on flute, but Barrueco’s arrangement is reminiscent of Piazzolla’s original works for guitar. Barrueco’s performance captured the passion, sensuality, and sadness of Piazzolla’s music. The great Spanish guitarist Andres Segovia made it his mission to develop an original repertoire for the guitar, written by the most prominent Spanish composers. Joaquín Turina, a friend of Manuel de Falla and admirer of Debussy, heeded Segovia’s call with two works written in the 1920s. In both Fandanguillo and Sevillana, Turina painted a personal and impressionistic portrait of Spanish flamenco music. Segovia’s much-imitated interpretations of this music emphasize its folkloric roots. Barrueco took a different approach, underscoring Turina’s love of impressionism and reflective attitude toward flamenco with an intimate interpretation that included the softest and most expressive strummed rasgueado chords I’ve ever heard.

Isaac Albéniz’s Suite Española is made up of pieces, written for piano over a period of many years, that depict the various musical styles of Spain. Guitarists have played three of the movements, "Granada," "Asturias," and "Sevilla," since Albéniz' friend Francisco Tárrega made the first arrangements for guitar. As a young man, Barrueco was the first to perform and record all eight movements. In Saturday’s recital, "Granada," a heartbreaking serenade, and "Asturias," one of the best-known works in the guitar repertoire, were marred by intonation problems. The final movements, "Cataluña" and "Sevilla," were given breathtakingly virtuosic and stylish readings. Barrueco, Cuban by birth, came to this country when still a child as a result of the Cuban revolution and the rise to power of Fidel Castro. He played arrangements of two Cuban songs as encores. La Comparsa, by Ernesto Lecuona, depicts the coming and going of a Cuban street dance during Carnival. Canción Triste, by Carlos Fariñas, was suffused with a sadness appropriate to exile.