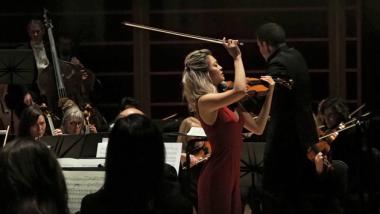 The Sibelius Violin Concerto in D Minor is one of several mountains that violin soloists need to ascend before they can lay claim to stardom. Hundreds make the attempt every year, but only a few reach the top. Simone Porter, who played the concerto with the Santa Rosa Symphony on Sunday afternoon, got close but didn’t quite summit.

Porter wore a red jumpsuit that complemented her athleticism and musicality. She was often in motion, whether bending at the knees to gather strength or bolting upright to reach the highest notes on her instrument. Her movements often paralleled her phrasing, with forward surges or backward steps marking phrase beginnings and endings.

The main story, however, was Porter’s gorgeous sound, particularly on the lower strings. Her low notes at the beginning of the concerto’s first movement were simply stupendous. She could have stayed down there for the entire concerto, so awesome was the sound.

Nonetheless, Porter moved on to the upper strings, complementing her basso profundo with exquisite phrasing somewhere north of high C. It was a visceral performance aided and abetted by flawless bowing and vibrato. Her bow arm was a marvel of fluidity.

The highlight of the first movement was a passage near the end that Porter played entirely on the G string while effortlessly shifting up and down the fingerboard. The closing presto was nearly as riveting, and the audience, including me, burst into indecorous applause at the end.

Sadly, the slow second movement didn’t live up to the sprightly first. The horn entries were sometimes ragged, and the orchestra was often too loud, covering Porter to a certain degree. Worse still, the tempo began to plod in the middle, but both Porter and conductor Francesco Lecce-Chong made a full recovery in time for the emotional ending.

The third movement was a mixed bag. Porter played the main theme beautifully, really digging in to the repeated downbows that punctuate the movement. But her many upper-register runs were sometimes rough, with dubious intonation on the highest notes and a lack of clarity in the fastest passages. The beauty and urgency of her playing, however, brought her close to the top. Stardom for Porter is a definite possibility, but she needs some fine tuning.

Sticking with the tried and true, Lecce-Chong conducted Brahms’s Symphony No. 2 after intermission. Attention shifted to the orchestra, where full participation is needed to unveil Brahms’s intricate and monumental construction. The strings began with assurance, producing a lush but crisp sound in the opening bars. Lecce-Chong’s gestures on the podium were compact and exact, displaying a lapidary polish and precision. You could close your eyes and imagine a bucolic alpine meadow, surrounded by imposing mountains.

The cellos opened the second movement with an expansive line that warmly embraced a limpid solo by horn principal Meredith Brown. Suddenly, everything was moving at once, with each line distinct and easily heard. Lecce-Chong achieved clarity amid Brahms’s density, allowing each section its moment in the sun. A wonderful pause near the end actually increased the dramatic intensity.

The exactitude and precision continued in the remaining movements. In the third, the dynamics were superb, the melodies playful and lilting. In contrast, the fourth was rollicking and tumultuous, with a staggering level of artistic invention on display. Lecce-Chong captured just the right spirit by eschewing overly dramatic gestures and keeping to the task at hand. It’s hard to imagine a better performance.

Unfortunately, I was a few minutes late to the concert because of a forgotten ticket, so I had to watch the opening piece — Missy Mazzoli’s Sinfonia — on a closed-circuit TV in the lobby. It sounded interesting, but that’s as far as I can go.

The SSU Symphonic Chorus is the star of a very bright show.

The pianist’s reading of a Shostakovich concerto brings out the best in the Santa Rosa Symphony.

The former Santa Rosa Symphony music director returns with a lineup of Gershwin, Barber, and Copland.