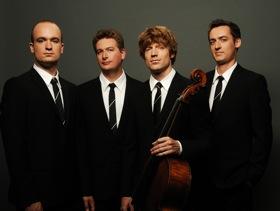 In a lucky stroke for fans of new music, it seemed to be Thomas Adès Week in the Bay Area over the past few days. San Francisco Symphony led off, with performances of the composer’s Polaris: Voyage for the Orchestra (with film by Tal Rosner), followed Sunday by the Calder Quartet’s appearance at Cal Performances’ Hertz Hall in a mostly-Adès program, joined by the composer himself on piano.

The Berkeley recital featured works Adès composed between 1994 and 2010, taking him from audacious youth to his current brilliant maturity. His Mazurkas for Piano (2009) pay offbeat, ghostly homage to Chopin, picking up the improvisatory spirit of the Polish master’s piano music with trills, highly ornamented melodies, and exploitation of the far ends of the keyboard. They bring to mind not only Chopin’s mazurkas, but also his preludes, which so often feel made-up on the spot: all of this, and obviously in Adès’ distinctive voice. He played them with a marvelous sense of rubato — it would be fascinating to hear him in Chopin — and, according to the program notes, some of that rubato is written into the score.

The string quartet Arcadiana, from 1994, also depends in large part on the composer/pianist’s talent for using existing works as a springboard or structure for his own. The seven movements of Arcadiana each “evoke an image associated with ideas of the idyll, vanishing, vanished, or imaginary,” according to him.

The Four Quarters, which the Emerson Quartet commissioned and premiered just this year, is yet another virtuoso display of Adès’ compositional brilliance. The work title refers to divisions of time, the movement titles to four times of day. One of them, “The Twenty-Fifth Hour,” is wholly imaginary. “Nightfalls,” the first, opens with an insistent repeated rhythm in the violins. As the rhythm is passed down through the quartet, the texture thickens and the music grows heavier. The rhythmic figure overlaps, as the harmonies rise and the texture thins out again. “Serenade: Morning Dew” is almost entirely pizzicato, light and jaunty. “Days” begins with beautiful lyricism, then becomes declamatory and harsh; again, a repeated rhythmic figure plays a large role. “The Twenty-Fifth Hour” is written in the astonishing time signature 25/16 and uses thoroughly modern string techniques, yet still somehow manages to sound at times like a medieval dance.

The concert closed with Adès’ Quintet for Piano and String Quintet, written in 2000. This 20-minute, single-movement work is formidably complex, a riff on the Classical-era sonata-allegro form. Although it contains two themes that are played against each other, the movement sometimes sounds more like a theme and variations than like the orderly progression of a sonata movement.

This was a most satisfying program, beautifully played, and with technical and musical challenges met.

Adès’ style in this work is strongly contrapuntal at times, and the slightly awkward first theme, in particular, lends itself to contrapuntal treatment. It’s a compositional tour de force.

The Calder opened with a splendid account of Stravinsky’s Three Pieces for String Quartet. Written in 1914, just after the gigantic and richly scored Rite of Spring changed music forever, they’re marvelously compact and spare. The droll and folkloric “Dance” evokes the village square, and a choreographer could create a fine dance from the cat and mouse game played in “Eccentric.” The closing “Grave” is just that, a solemn dirge. Elsewhere on the program, Adès gave an oddly meandering and aimless performance of one of Liszt’s Années de Pèerinage, Petrarch Sonnet No. 123 (I’ vidi in terra angelici constumi).

All in all, this was a most satisfying program, beautifully played, and with technical and musical challenges met. I only wish it could be reprised later this week, the better for us listeners to become familiar with these works.