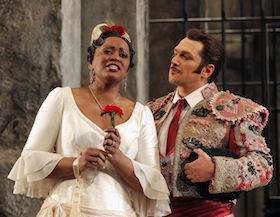 All the basics are in place in San Francisco Opera’s propulsive, stylish production of Carmen. It was vividly restaged by José Maria Condemi, who endeavored to keep the richly distinctive qualities of the late Jean-Pierre Ponnelle’s original 1981 production. The square of Seville at the opening, and the street outside the bull ring at the end, scorch in white sunlight, as heavily dressed citizens and soldiers fan themselves. Corporal Moralès first appears washing his feet in a tub, and the cigarette girls emerge from their factory with buckets of water and wet rags with which to cool their sweaty arms. Raking footlights, long shadows, rushing ladies with children, priests, nuns, religious statues, urchins, and a chorus that gazes into the auditorium marveling at a parade we never see — all put Ponnelle’s signature boldly before us.

Despite my repeated viewings of this opera, at Sunday’s matinee performance Music Director Nicola Luisotti brought Carmen back to life for me. Bizet’s ravishing and original score has long been endangered by repetition, and his music is perhaps too complex to survive the routine of its own popularity. S.F. Opera, for instance, has done Carmen nine times over the last 30 seasons — about once every three years. Yet somehow Luisotti in the orchestra pit cut through the accumulated dust.

His fast-starting prelude whipped up so much excitement that the sophisticated Sunday audience inappropriately broke into applause before the final slow section, with its tragic themes. He caught the sensuous aura of the smoking scene with the cigarette girls — the silky, idiomatic French style that so easily escapes conductors. He began the second act in Pastia’s tavern very slowly to evoke drunkenness and sleep, and then built into a frenzy of dance. In this scene, the entire performance took off and sustained its drive right to the end, including a sweep through two ravishing entr’actes.

Maestro Luisotti’s success with the orchestra has been clear since he arrived at S.F. Opera, and he — and his musicians — met Bizet’s challenge.

Our Carmen was Kendall Gladen, a tall, youthfully attractive mezzo-soprano and a former Adler Fellow, stepping in for an ill Kate Aldrich. And step in she did. Her smooth, rich, even tone perfectly supported the casual intensity of her understated “Habanera.” She showed real authority at this crucial opening moment. Her voice at first seemed to lack brilliance and to be rather unvaried, but she showed power and depth in the fatal card scene of Act 3 and calm determination in face of Don José’s murderous pleading at the end.

That character rarely looks pin-up handsome, much less as young as Thiago Arancam. This seemed to go far with Sunday’s audience. Yet this opera is about his sexual obsession with Carmen. Unfortunately, Arancam seemed erotically indifferent and vocally underpowered, though he opened up a little in the third act with Micaëla and in the last act with Carmen. Even then, however, he could not produce the depth and variety of tone or the sustained legato written into the role.

Sara Gartland, also a former Adler Fellow, was perhaps wrongly cast as Micaëla, who symbolizes the innocence of José’s home village but also has a strength that he lacks. She sang her two arias, which have launched many a career, in a clear if slightly nasal voice somewhat short of the plushness that should convey the innocence of a young girl with hopes of marrying her man.

Paulo Szot, whose training was in opera and who had a big success as Emile de Becque in the recent South Pacific in New York, displayed confidence and authority as the toreador, Escamillo. His voice is not quite low enough for the part, yet he sweeps across the stage with the conviction of one used to holding the spotlight.

As for others in the cast, Trevor Scheunemann’s Morales showed us a comfort with his military place that José is missing. Wayne Tigges as Zuniga tended more to bark than to sing with real flow (but did the thieves need to strip him to his shorts?). The superb quartet of brigands included Susannah Biller as Frasquita, Cybele Gouverneur as Mercédès, Timothy MIx as Le Dancaïre, and Daniel Montenegro as Le Remendado. Their devilish skill as smugglers came through in the vocal ease and precision of the great tavern ensemble in which Bizet uses voices like instruments playing pizzicato.

In this Carmen, even though it has no real star singers, Bizet’s spell still hypnotizes audiences, thanks to Ponnelle’s bold production and Luisotti’s magical conducting.