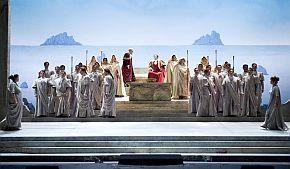 Kathryn Miller on October 21, 2008
Mozart’s Idomeneo tells a tale of love, sacrifice, shipwreck, and war. Add to that a gorgeous score, stunning costumes, and good singing, and you should have all of the ingredients of a successful opera. The opening night of San Francisco Opera’s production, on Wednesday, however, was less than satisfying. While it featured several strong company debuts and a fabulous performance by Kurt Streit in the title role, the drama suffered from static, unimaginative staging, and balance between the orchestra and the singers was never achieved.

Idomeneo is about a king returning from the Trojan War. Battered by a storm, he vows to the god Neptune to sacrifice the first person he meets on shore. That person turns out to be his son, Idamante. In the obligatory operatic love triangle, Idamante is loved by two women, the captured Trojan princess, Ilia, and the vengeful Greek princess, Elettra. The most exciting performance was Streit’s Idomeneo. His tormented king seemed genuine, and he sang in a way that was direct and strong, never strident. He excelled when navigating extreme changes in dynamics, once going from the lightest of pianissimos to full vocal power, to great effect. Alice Coote’s Idamante (the center of the love triangle) sounded direct and assertive. Her voice complemented Genia Kühmeier’s Ilia wonderfully in their Act 3 duet, and throughout the evening she sang brightly and with agility. Her acting, though, felt stilted, and she often resorted to what looked like posturing. It was as if she was thinking “Look! I’m being manly!” which detracted from her solid vocal performance.

In her first outing at the San Francisco Opera, Austrian soprano Kühmeier as Ilia was sensitive and thoughtful. Her voice had a sparkly quality, with crystalline pianissimos. She also showed a wonderful emotional range. As Ilia’s rival, Elettra, Iano Tamar (from the country of Georgia) showed a keen sense of stagecraft. She knew exactly how to gesture or turn her head in order to create a perfect stage image. Vocally, she was less successful. Her dark timbre appealed to me at first, but soon it became clear that she needed more focus and point to project the fiercer aspects of her character. Elettra’s final aria “d’Oreste, d’Aiace” (Within my breast I feel the torments of Orestes and Ajax), with such lines as “tear out my heart, you horned serpents, or a sword will end my pain” illustrated by shriek-like figures of descending staccato notes, should send chills down the spine. Instead, I was left wondering why she was so composed and vocally sedate in this moment of high passion. In the small role of the High Priest of Neptune, Robert MacNeil excelled in a modest, though promising, debut. His singing was lovely, clear, and well-focused. Current Adler Fellow Alek Shrader convincingly portrayed Arbace, the king’s wise old advisor, with the help of a gray wig, and facial hair. He moved like a man whose back and joints were failing, which contrasted interestingly with his youthful and lively voice. Thanks to Shrader’s interpretation, it was a treat to hear Arbace’s first act aria, which is often cut.

Functioning as the classic Greek Chorus, commenting on action happening both on- and off-stage, the San Francisco Opera chorus produced a full, resonant, and cohesive sound. As Cretan maidens and Trojan captives, Mary Finch, Natasha Ramirez Leland, Chester Pidduck, and David Kekuewa provided sensitive contrasts to the intensity of the full ensemble. Bass Kenneth Kellogg (another current Adler Fellow) sang commandingly as the voice of the Oracle, though the use of amplification and sound effects while he was singing was distracting. Despite its reduced size, the orchestra, under Music Director Donald Runnicles, seemed to compete with, rather than support, the singers. At only two-thirds of its usual size, the ensemble muscled its way through the score, and overpowered the singers on multiple occasions. John Copley’s production lacked motion and naturalism. While some singers, Streit in particular, were able to bring real passion to their roles, most looked hampered by awkward staging and artificial gestures. The set, evocative of crumbling buildings, provided some focal interest, particularly when images or light effects occupied the back scrim. The set pieces, however, were practically the same color as the chorus' costumes, which made for a bland palette. This may have been intentional, however, since the muted colors focused attention on the principals’ richly hued outfits. While gorgeous, the costumes also seemed ungainly. Streit visibly tripped over his voluminous cape at least once. Performances run through October 31, and balcony ticket holders can experience the show in “Opera Vision.” Screens are suspended from the balcony ceiling providing close-up shots in high-definition.