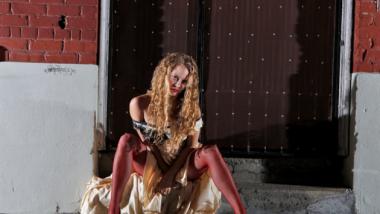 The grand porte-cochère entrance to the historic landmark—police-taped off by a stonehenge of portapotties—proclaimed the sardonic degeneracy of what was going to take place inside. You had to sneak in through a heavily curtained side door as if entering a speakeasy or brothel. This was Oakland’s old 16th St. Sante Fe train station, the venue for what proved to be a monumentally memorable Lulu staged by West Edge Opera on Saturday night.

Alban Berg’s masterpiece may be torture for those who have trouble with 12-tone music, but for others, such as Theodore Adorno:

This music, as a radiant, multi-hued jewel for the beloved body, seeks to restore human dignity to a banished, heretical yearning.  Every bar of music intends salvation for the banished, for the symbol of sexual being, for a soul that in the hereafter rubs the sleep from its eyes …"

Whatever its predelictions, the sold-out audience was treated to a superbly realized experience. Music Director Jonathan Khuner and his well-chosen musicians made the most of the version for solo voices and chamber orchestra arranged by Eberhard Kloke: Intonations never slipped; somehow, even most climaxes seemed nearly as powerful as those that could be achieved with Berg’s full orchestra. On the other end of the dynamic spectrum, the chamber forces allowed for a welcome sonic transparency.

Just as impressive was Philip Skinner as the psychosexually trapped Dr. Schön and the uncredited Jack the Ripper, who, as a stand-in for middle-class values and justice, tries to extirpate Lulu and all the other femme fatale Lulus from consciousness.

As the story of suicide, crimes, and murders associated with Lulu unfolded, patrons sat in the used-to-be-beaux-arts concourse of the station, with horsehair ceiling panels dangling, and its magnificent chandeliers long gone. No electricity was available: Lights were spotty and powered by a thankfully distant and silent generator. The elegant marble floor was covered by worn carpeting donated from a Google convention. The circular information kiosk was moved to the back edge and served as a refreshments bar. Lurid blue lights covered the backstage. Moderately visible surtitles were projected on the back wall.

The raised platform staging brilliantly designed by Chad Owens looked appropriately makeshift, as if the police would arrive any minute and close the performance down. Three areas of the backstage were blocked off or revealed by hand-drawn curtains as appropriate to the action. The forced exposure to humanity’s essential animal nature — despite the superficialities of civilization — permeates Berg’s adaptation.

A fine video by Jeremy Knight described the arrest of Lulu for murdering Schön, and her escape from prison with the help of the Countess Geschwitz, fervently sung by Buffy Baggott. Bojan Knežević was gruffly menacing as Schigolch. Erin Neff, Joseph Raymond Meyers, Audrey Douglass, and Michael Jankosky adeptly filled out the rest of the cast, with Zachary Altman admirably singing, and pirouetting about the concourse before and between acts, as the lion tamer and acrobat.

West Edge’s immersive production was a strangely poignant combination of simultaneously generative and degenerative facts of life. On the one hand were the compelling desires to create and procreate amid societal obstacles. On the other was the desensitization accompanying repetitive behaviors (and dense, unrelievedly dissonant music) categorized wrongly or rightly as sins. All this in a decaying superstructure where travelers once waited patiently, or fiddled around rebelliously, until their journeys to another place began. Was this a metaphor for earthly existence?