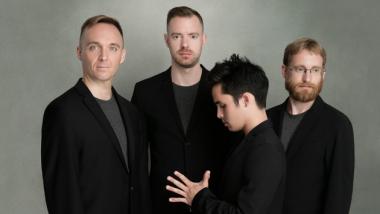 Seeing a great quartet play one of the most important works of the 20th century, without having to schlep to Civic Center or pay an arm and a leg? It was like a dream.

The third quartet, in particular, is a good entrance point for Carter’s music in general — not just because it’s great, but because characteristic organizing elements create a sort of guided listening experience. The group splits into two duos, both of whom play a series of movements featuring repeating intervals.

What’s fun is that these timings aren’t obviously coordinated, and the effect is often disjointed, always complex. On Sunday, though, I was struck by how often JACK seemed to come together. The score situates the duos on opposite sides of the stage, a setup that both differentiates the sound sources and visually exaggerates their convergences.

Carter’s work, Wulliman said, is like something beautiful in nature: you needn’t fully understand the phenomenon in order to appreciate it. I can’t yet follow every note, but JACK’s performance certainly made this music clearer to me.

Historical predecessors, too, helped illuminate these complex rhythms. On Sunday, JACK paired each of the contemporary works with arrangements, by Otto, of medieval and Renaissance music. The old often sounded as out-there as the new.

From the 1500s, Thomas Morley’s Christes Cross was the most familiar-sounding of the older works — but even it has its moments. Each voice stays in its own lane, and by the middle of the work, there seem to be four different pulses at once.

JACK paired the Morley with the First String Quartet of Zosha Di Castri, written for the finalists at the Banff Competition. It’s a fabulous competition piece: interesting, compact, and presenting many challenges.

In one passage, the players share a discrete set of pitches, and momentarily, the music reminds me of Cage’s String Quartet in Four Parts — only on Adderall, sharp and ultra-focused. In other moments, certain motifs seem to sample Bartók.

In fact, Di Castri was inspired, in part, by her work with electronic music. My favorite effect she creates is a series of swells, abruptly dampened. The sound is deliciously artificial, like the clipping of a botched editing job.

There’s a different kind of virtuosity in John Zorn’s Necronomicon, a five-movement work from 2003. When I think about Zorn, I think of music thick with ideas, and Necronomicon’s outer movements fit the bill.

The two slow movements, though, are the stars for me. Slowly turning chords in “The Magus” create a kind of schmaltzy sweetness that reaches great heights in the imploring “Incunabula.” Repeatedly, Zorn toys with convention — square phrase lengths, functional harmonies — in ways that evoke nostalgia.

In many passages I’m taken aback by the beauty of Zorn’s harmonies, and especially, the way these pretty clichés create humor. In the scherzo-like “Thought Forms,” running lines hit a wall: a long, expectant ninth chord. From here, there’s nowhere to go but a coda, one that feels hackneyed in a good way.

On the other hand, “Fumeux fume par fumee,” a three-voice rondeau by the 14th-century composer Solage, is comparatively bizarre. Lurching cadences seem to pick chords at random, and the text (“A smoker smolders smokily”) sounds like a boring person doing Mad Libs.

If vocal performances of Solage tend to highlight the music’s angularity, on Sunday the group’s sound had a smoothing quality, a way of caressing the bumpy landings. With its comfortable droning and exaggerated thirds, this music sounded, paradoxically, current; closing my eyes, I could have been listening to Helmut Lachenmann.

The Arditti Quartet Champions the Maximalist Microtonality of Ivan Wyschnegradsky

The acclaimed ensemble is transcendent in the composer’s rarely heard quartets.

Glimpses of Personality From the Casals Quartet