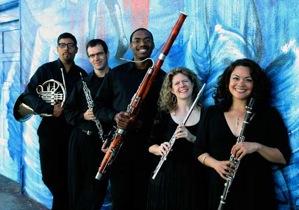 Whither the Winds Blow

Quinteto Latino, a wind quintet specializing in Latin American classical and contemporary music, branched out in its program at Old First Concerts, performing works from both the Latin American and European wind quintet traditions. The musicians who make up the quintet — Diane Grubbe, flute; Kyle Bruckmann, oboe; Leslie Tagorda, clarinet; Armando Castellano, French horn; and Shawn Jones, bassoon — all have thriving local careers. They are clearly fine players, and they put together an enticing and varied program, yet their execution was inconsistent. It’s possible that they were affected by the resonant acoustics of Old First Church, which, from two different locations in the sanctuary, blunted the group’s articulation and may well have affected their ability to achieve a good balance within the ensemble.

Best of all were the works played immediately before and after the intermission, Claude-Paul Taffanel’s Quintet for Wind Instruments and Alberto Ginastera’s Duo for flute and oboe, Op. 13. Taffanel, a famous 19th-century flutist and pedagogue whose exercises and method are still hugely influential a century after his death, won a composition prize with this piece in 1876. I’d give it a prize myself: It’s so dramatic and well-crafted that hearing it was like stumbling into an opera performance. The opening Allegro con moto had the feel of an opera overture, tightly structured and played with panache and a fine handoff of running lines from one player to another, ending with a mysterious, fairylike delicacy. The central Andante opened with a long-breathed melody for the horn, and concluded with a longing, melancholy theme — an aria for baritone? And, for a close, we got a major-key, tarantella-like Vivace, shades of Mendelssohn’s “Italian” Symphony.

The Taffanel Quintet is so dramatic and well-crafted that hearing it was like stumbling into an opera performance.

Ginastera’s Duo, crisply and virtuosically played by Grubbe and Bruckmann, has three movements, with titles descriptive of the music itself: Sonata, Pastorale, and Fuga. Stylistically, the work sometimes suggests Stravinsky, as in the aggressive, chattering, busy rhythms of Sonata and the tightly wound Fuga. The Pastorale’s opening melody is assigned to the oboe, an instrument conventionally associated with the pastoral, as is its big brother the English horn. Ginastera’s Pastorale is almost medieval in feel, both melodically and in the hints of species counterpoint when the flute enters.

José Luis Hertado’s Tenue, written for Quinteto Latino in 2007, followed the Ginastera. Its two movements are short and rather blunt, written with little rhythmic or harmonic movement and consisting mostly of long, sustained pitches. Before it was played, Castellano spoke briefly about the piece, which he called “subtle” — a description that left me scratching my head at the end of its performance. Ástor Piazzolla’s Milonga sin palabras followed; alas, in this performance it lacked charm and drama, sounding page-bound and far too careful. Another work, Heitor Villa-Lobos’ Quintette en forme de Choros, was formally obscure, sometimes alluding to Stravinsky’s great Russian ballet scores, sometimes sounding like a romance.

The concert opened with the Australian Percy Aldridge Grainger’s Walking Tune, which sets a tune the composer hummed to himself on a hike in the Scottish Highlands. This short work, beloved of wind quintets everywhere, made a good warm-up number, but ought to have been more neatly played. To promote its upcoming CD release, the Quinteto closed by playing Manuel Ponce’s Estrellita. Strung across the edge of the stage and without music, they played with all the charm, relaxation, rubato, and atmosphere that the Piazzolla lacked.