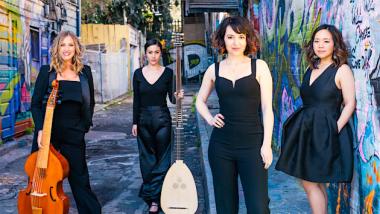 But   it’s come to pass, thanks to an initiative by the Helia Music Collective, which supports the creative endeavors of Bay Area women in music. Four Helia-commissioned works, along with three Baroque songs, made up Saturday’s program at the Center for New Music. The Liaison Baroque Ensemble (Melinda Becker, mezzo-soprano; Susie Fong, harpsichord; Hallie Marshall-Pridham, Baroque cello; and Tatiana Senderowicz, theorbo) performed.

Throughout the program, mezzo-soprano Becker effortlessly switched tracks, from light Baroque singing to all the various demands of the new works. In fact, it was the composers who seemed reined in, sometimes, by the nature of the Baroque ensemble.

I’m most interested in hearing new works when they actually have something new to say. Then again, truly innovative writing for Baroque instruments might result in sounds that aren’t immediately “period,” and then the question arises: Why use Baroque instruments in the first place?

The other option is to let the Baroque instruments sound Baroque, in a kind of conservatism that characterized two of the commissioned works. That’s not to say that nothing new happens in Julie Barwick’s Songs of Ice and Fire. Barwick — a co-founder of Helia — does interesting work, especially in the second movement, whose gothic text, by Amy Lowell, calls for musical eeriness. In between continuo lines, single notes in the theorbo sound starkly sparse, and struck clusters in the harpsichord contrast effectively with the wispy, hollow sound of flautando on the Baroque cello.

In Emma Logan’s In the Evening, the love lamented in the Strozzi chaconne (“L’Eraclito amoroso”) still lives. In fact, the opening chords could have been written by Strozzi, herself (although the central motif, of unhurried parallelisms, sounds almost impressionistic). Few moments in this work haven’t already been heard, but still, Logan — Helia co-founder as well as a Center for New Music curator — effectively uses text by Fenton Johnson to create a well-structured art song.

In a similar way, Emily Koh (who lives in Georgia) stretches Caccini’s original phrases, the music of am burning, have burned, will burn becoming mockingly ceremonial in its slowness. Skittering notes, at the ends of long tones in the cello, sound like a French overture failing to get off the ground. But most striking in this theatrical work are the exclamations — “Cupid is naked!” — and the cackling laughter that ensues.

If only the Baroque performances had been as adventurous. The group’s playing wasn’t half as assertive as the speaker of Caccini’s “Chi desia di saper” (Who wants to know) and the same composer’s “Ch’amor sio nudo” (That love that is naked) sounded strangely square, for a song about Cupid

The most substantial song, Strozzi’s “L’Eraclito amoroso,” was also the most effectively performed. The opening section, for voice and theorbo alone, felt free and even spontaneous. But the ensuing lament, still, was prohibitively cautious, no one off-book enough for the emotional outpourings to feel authentic. It was too bad, because “L’Eraclito” isn’t just a beautiful song — it’s a great song, deserving of a great performance.

The Philharmonia Baroque premieres a new oratorio inspired by Bach but with a very 21st-century twist.