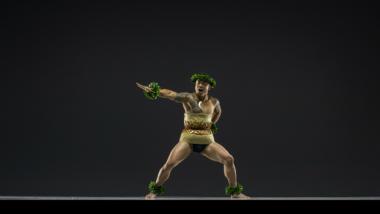 The treasure that is the San Francisco Ethnic Dance Festival returned to its customary digs at the Palace of Fine Arts on Saturday. The 37th annual series, which continues next weekend with an entirely different roster of companies, brings a remarkable array of 300 Bay Area dancers and musicians whose devotion to the art forms of their homelands (or maybe their ancestral homelands) is total. The audience walks away with the bounty.

More accurately, the audience practically dances away, inspired by the entire vivacious cast, arrayed onstage at the curtain call, then mixing and mingling to drums, horns, and flutes, as it frolics up the aisle to the exit. Here’s Scotland, hard by Mexico, near Hawaii, Harlem, and the Philippines, South Africa, and China. Nobody leaves unhappy. It’s easy to see why. These dancers are passionate and — of equal importance — immaculately rehearsed. If there were any bobbles, your reviewer missed them.

The opener, from Hiyas Philippine Folk Dance Company, was sunny even when the women dancers held lanterns for “Ti Silaw,” guiding fishermen to shore. The fishermen wielded paddles for a happy number called “Gaod.” The most exacting dance, “Saway ed Tapew Na Bangko,” takes place as quartets or duos of dancers balance on top of a bench, artfully negotiating turns and trading places on the narrow board. A rondalla music ensemble of guitar, upright bass, and Philippine variants on the Spanish mandolin accompanied.

From the Chinese Performing Arts of America came “The Court Dance of the Tang Dynasty,” for 16 dancers armed with silk sleeves and ribbons that they looped and twirled, in rainbow hues that beautifully caught the light. The men dancers were busy with knives on sticks for wushu, a martial art melded with dance.

Harsanari, celebrating the Sundanese culture of West Java, included a martial dance where the men used fans to frighten their opponents, which actually looks like a very effective tactic. A duet for a man and woman, stately, precise, yet flirtatious, includes intricately bent fingers, deep bends of the knees, and almost lilting sidewise movements of the torso. The music includes elements of a gamelan orchestra.

From Starchild Dance, whose inspiration is the social dances of Harlem, came a sweet/sassy duet, choreographed by Traci Bartlow, partnered by Ray F. Davis. Bartlow and Davis’s suite sampled the Charleston, lindy hop, boogaloo, locking, house dance, soul, and funk, among others, with exhilarating music by Elandis V. Brooks and Ajayi Jackson on trumpet and drums, respectively.

Mosaico Oaxaqueno, dances from Oaxaca, was presented by Ensambles Ballet Folklorico de San Francisco. In the opener, women danced with pineapples on their shoulders; the next, “Danza de Diablos” (“Dance of the Devils”), had men in horned masks and furry chaps, suggesting the colonial landlords who enslaved African laborers. The devils gave way to gents in white with red scarves, flirting with their ladies who ruffle their skirts and stamp their feet. The music — on violin, guitar, box drum, and harp —  is Mexican “son,” with verses invented at that moment.

Zulu and Xhosa dances, performed by Jikelele Dance Theater, founded in Oakland in 2012, are part of the company’s mission to keep alive Township Theater, which was developed during South Africa’s apartheid era. The dances, accompanied by dikosha drums, included the vigorously hip-active Siolihamba; the Zulu men’s Gijima, a running celebration of victories and weddings, and the Xhosa dance called Amangwevu, with its vigorous leaps and kicks.

Gorgeous women in slinky black dresses, with drums, cymbals, and tambourine introduced their belly-dancing leader, Shabnam Shirvani, in a mesmerizing dance incorporating U.S. and Middle Eastern choreography. The dance, titled “Arabian Ostrich,” celebrates that extinct bird. As the ostrich in question, with black plumes on her head, Shabnam does ripply things with her stomach muscles that no ostrich has ever been able to accomplish. Too bad her musical accompanists were mostly window dressing, for they moved as if they were capable of far more.

The final dances, from the Academy of Hawaiian Arts, honored a chief of the Kalakaua era, the last independent ruler of Kaua’i and Ni’hau. The men dancers accompanied themselves with large gourds; their garb included grass skirts, western-style suit jackets, green leis on their heads and, of course, bare feet. The women wore modest full skirts and blouses and lovely flowers; they moved with boneless musicality. The head of the school, Kuma Hula Mark Keali’I Ho’omalu, his long blond hair in a chignon and wearing sunglasses, provided the music to the dances he choreographed, with oli, mele, and drum. The cross-culturalism of his appearance was also part of the whole program, as dancers or musicians from one group often stayed onstage, playing or dancing as the next group entered. It added to the sense that here is a powerful community of dancers, and they’re all our neighbors.

It’s a powerful argument to the city for making the Palace of Fine Arts a permanent and expansive home for the festival and many other local and touring arts entities, and World Arts West, which sponsors the Ethnic Dance Festival, is making it. Here’s hoping they win.