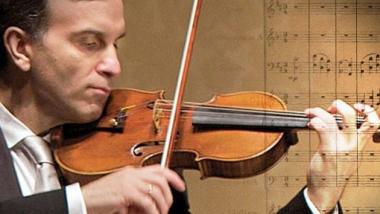 A World Premiere and Gil Shaham at the S.F. Symphony

When an overture at the symphony is frothy, it often feels wildly unrelated to the rest of the music: It’s something to sit through in order to get to the real program. Not so at the San Francisco Symphony last weekend. Conductor Michael Tilson Thomas called the opening work by Steven Mackey a musical amusement park, and it was — the first ride that set the scene for an entire evening of leisure.

Make that five rides. Portals, Scenes and Celebrations is a series of colorful miniatures, each of which begins with a salient sound and then runs with it. A flighty viola solo becomes a spirited call-and-response that parades through the orchestra, down to the nearly unpitched drums. The subtle pointillism of spritzing aerosol cans transforms into jaunty harmonies that sound like Copland. (Born in 1956, Mackey has collaborated with Tilson Thomas many times, and he certainly knows what to write for this orchestra.)

It’s fun to watch this kind of musical telephone game, whose passages often dazzle technically. At the same time, the piece’s small scope makes the music almost too coherent. In this, Mackey’s work isn’t unique: this allocated slot in the program generally gets filled with music that doesn’t risk much.

What would happen if these miniatures continued — would the audience stay as engaged? The vocabulary, to me, isn’t as distinctive or as sophisticated as that of, for example, Niccolò Castiglioni in Inverno in-Ver (another batch of miniatures — from the 1970’s — recently performed by SFS). Still, Mackey’s work is good in its cartoonish way.

Prokofiev’s Violin Concerto No. 1, too, mixes lyricism and aggression with a kind of cruel humor. On Friday, there was mostly just lyricism, because Gil Shaham — whose fluid style lent itself well to the torrents of scales and fluttering trills — was the soloist. Everything was beautifully full: whole bows, placed at the optimal sounding point, and continuously vibrated. It was all “concertmaster beautiful,” which meant that the more high-stakes moments of the music didn’t necessarily feel that way.

In fact, Shaham enlisted concertmaster Alexander Barantschik for the encore — a duet by Jean-Marie Leclair — that was the sweetest moment of the evening. Their chamber music was magnificent.

Sweetness also characterized Tchaikovsky’s Fourth Symphony, some of whose tragedy was downplayed — but whose lightness was often wonderful. In the Scherzo, the pizzicato sound was shaded with care, as if the gentle Breadcrumb Fairy had wandered in from Sleeping Beauty. The woodwind solos, especially by bassoonist Stephen Paulson in the slow movement, were gorgeous.

This great (and comfortably old) symphony is a programming no-brainer — a pleasure to watch, every time. And yet precisely because it’s played so often, performances of the Fourth rarely really stand out. The first movement, which already feels like the crux of the work, didn’t create a particularly strong effect on Friday. The playing simply wasn’t all that unified, and yet the course also felt overly planned. (Concerts may get better the longer ago they were, but still, I’ll continue to remember the Los Angeles Philharmonic’s performance here in 2016.)

Moments from the end of the performance, though, the thunderous opening theme — played with alarming new intensity — tied it all together. This is what they were saving for. The last triumphant measures of the piece were totally satisfying.

Although benefitting from the usual excellent performance by eighth blackbird, Rinde Eckert and Steve Mackey’s Slide is still uninvolving.