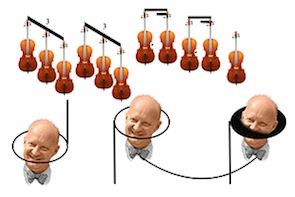 It’s been too long, 20 years, since one of the best-regarded modern cello concertos has been played here. It took the same wizard who played it then to show us now how to do it right, Yo-Yo Ma. Michael Tilson Thomas and the San Francisco Symphony matched Ma’s quality for a spectacular evening of all-German repertoire.

When I was growing up in the 1950s, Igor Stravinsky, Paul Hindemith, and Arnold Schoenberg were considered the three greatest composers alive. European training still had caché in music then, all three had become highly influential and U.S. citizens, and Neoclassicim/Modernism ruled the roost, so their ranking on this side of the Atlantic is not surprising. But as alternatives to those styles evolved, and other composers found their way to the sun, Hindemith’s star became the fastest to wane. Too much so, in the case of his best work, as was proven on Wednesday in Davies Symphony Hall.

The 1940 Cello concerto powerhouses with brass-filled tuttis, dazzles with technical display up and down the fingerboard, lilts with the composer’s best melody (which inspired William Walton to write a series of orchestral variations), and impresses both with rock-solid form and jaw-dropping mastery of counterpoint. (Who today among composers is half-way as accomplished in this art?) MTT, Yo-Yo Ma, and the Symphony maximized the impact of this composition with their consummate musicianship: Tilson Thomas with perfectly decelerated ritards at the tuttis, Ma with his joyous expression and flawless intonation, and the orchestra with top-drawer togetherness and note-perfect rendition.

The great French cellist Paul Tortellier considered the Hindemith concerto one of the three greatest ever written. He would fire up audiences so much with it that they would demand encores of the third movement. Such is an impossibility today, sadly.

My only miniscule disappointment with MTT’s otherwise terrific take on the interpretation of this masterpiece is his handling of the “coup de concerto” at the center of the work. Hindemith has been contrasting the lyrical melody which began the second movement with a scampering section worthy of a foxhunt. This builds with frantic counterpoint in the brass to a huge orchestral chord. The chord dies quickly, everything shifts to the strings, and a series of pizzicato chords leads into sheer genius — the lyrical and scampering tunes are discovered to work wonders together as they are played simultaneously. That first pizzicato chord should make hearts stop, and be louder than its followers, though I don’t think it’s marked so in the score. A few conductors have tried it, to improved effect, but MTT stuck with convention here.

The Music Director bookended the concerto with extremely standard works: an opening overture, Beethoven’s Leonore No. 3, and a second-half symphony, Brahms’ First. The overture was superbly realized, with the somewhat unusual special effect of the off-stage trumpet fanfare being played the second time from a point farther into the auditorium, so it filled the hall. The Brahms, on the other hand, while it understandably pleased the audience, was unexceptional — if on a high technical plane. A big disappointment for me was the lackluster treatment of the three-note “swells” (quick crescendo and diminuendo) in the middle of the first movement. While Brahms doesn’t indicate the dynamic range to which they should be extended, I’ve always enjoyed the maximum possible.

Tilson Thomas conducted with a baton for the tricky Hindemith, but preferred stickless sculpting for the familiar works. The variety of his gestures is amazing, and was a gratifying booby prize in Brahms' piece, which otherwise was not an interpretive showcase.