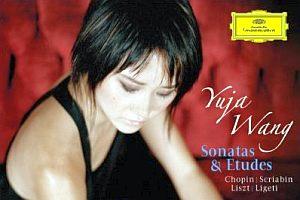 Young Genius in a Hurry

Janos Gereben on April 28, 2009
Among the many astonishing things about Yuja Wang is her relationship to time. At 22, already a leading pianist in the world, she not only made her first appearance — as a virtual unknown — only three years ago in San Francisco at a Chinese New Year Concert matinee, but a mere eight years ago she was still studying at the Beijing Conservatory, where Western music meant the time before Brahms.

And now, in recitals and on her new Deutsche Grammophone CD, Yuja Wang: Sonatas & Etudes, dazzles with Ligeti and Scriabin. Look at her Web site and that repertory: Arensky, Smetana, Messiaen, Albeniz ... in addition, of course, to Bach, Brahms, Beethoven (just to start with the B's).

The point is that coming out of a distant, "narrow training," as she calls the Russian-influenced conservative Chinese music education, a teenager took it upon herself not only to rise to the top in standard repertory, but to explore and master contemporary and extremely difficult music as well.

On the CD, Wang plays Ligeti's Etudes No. 4 (Fanfares) and No. 10 (The Sorcerer's Apprentice) not only with brilliance, but a kind of warmth and "singing" that's difficult to find in Ligeti pieces (outside the Requiem). In Fanfares, Wang's two hands are singing a duet together but each voice distinguished and separate. Here's the music (not in Wang's recording).

Wang's performance of Scriabin's Piano Sonata No. 2 in G-sharp Minor Op. 19 has a clarity and articulation that belies the well-deserved description of "devilishly difficult."

A large Chopin Sonata (No. 2 in B-flat Minor Op. 35) opens the program and Liszt's humongous B-minor Sonata, S. 178 closes it. In both, Wang's understanding and interpretation of big, complex structures is most impressive. As she herself describes the B-flat Minor Sonata, it's "not very Chopinesque," with its unusually dark and ominous tone (including the third movement's famed "Funeral March"), and Wang honors its depth, dignity, and substance.

The half-hour-long, relentlessly demanding Liszt Sonata — used as a decisive piece in top-level contests — is no stranger to Wang. She played it at age 14 and her revisiting of it here offers a glorious clarity, and a constant sense of freshness every time the work's two major themes return.

On May 20, 22, and 23 Michael Tilson Thomas conducts the San Francisco Symphony and Yuja Wang in Prokofiev's Piano Concerto No. 2.