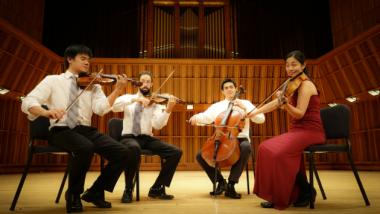 The young Telegraph Quartet is committed to bringing chamber music off the stage and into the audience — a mission that perfectly aligns with that of the Presidio Sessions concert series. These free events, a joint effort of the San Francisco Friends of Chamber Music and the Presidio Trust, take place in the intimate setting of the Presidio Officers’ Club. Here, the barrier between stage and floor disappears; during intermissions, the performers freely mingle with patrons.

Second violinist Chin described Garner’s Quartet No. 2 as blending 12-tone serialism with Latin American and Chinese influences. Indeed, the composer is flexible in his use of the tone row and never shies away from the thematic.

In the second movement, Garner temporarily suspends the tone row in favor of pentatonicism, and a melody from a Sichuan folk song (known in English as “Kanding Love Song”) emerges in the cello. Although the melody initially sounds like a departure from the movement’s harmonic language, Garner imbues each successive melodic strain with atonality, leading to a fulfilling reprise of the opening chords. Cellist Shaw played in a fluid, singing style; he and the group effortlessly shifted between the movement’s many moods.

Janos Gereben, in SFCV, aptly described the piece as “the kind of new music you want to hear again.” Garner, who is a longtime faculty member of the San Francisco Conservatory of Music, is currently composing a work for Opera Parallèle about San Francisco’s Barbary Coast to premiere in the 2016-17 season.

John Harbison is the recipient of many awards, including the 1987 Pulitzer Prize for music and a MacArthur Fellowship in 1989. His prolific output includes six symphonies, five string quartets, and three operas, among many other chamber and choral works. He is currently an Institute Professor of composition and chamber music at the Massachusetts Institute of Technology.

Bach was the main source of inspiration for String Quartet No. 2 (1987), whose movement titles — “Fantasia,” “Fugue” — evoke the Baroque era. The piece opens with a mournful fugal melody, which first violinist Maile played with moving plaintiveness. The texture grows busy as each voice enters the fold, but Telegraph’s ensemble remained tight even in the most rhythmically complex passages.

The third movement, “Recitative and Aria,” feels like the crux of the work: it contains the most emotionally intense passages, as well as the most pronounced contrasts. The second violinist introduces the cantabile (singing style) aria, which Chin played with utmost sweetness high on the D string. Maile’s florid recitative-style passages sounded effortless.

Stravinsky and jazz also are among Harbison’s influences, and the finale’s lively dotted rhythms and boisterous unison chords provide a rousing and satisfying conclusion to the work. Violist Lin played with great energy here; although the group didn’t quite agree on the articulation of the main motif.

Even as the noisy neighboring room interrupted the performance, the Telegraph Quartet was unfazed. The group was unflaggingly outgoing, committed, and creative. Telegraph recently received a grant from San Francisco Friends of Chamber Music to record an online digital EP of Leon Kirchner’s Quartet No. 1 and Anton Webern’s Five Movements for String Quartet. If Friday night’s performance was any indication, this recording will be a fine one.