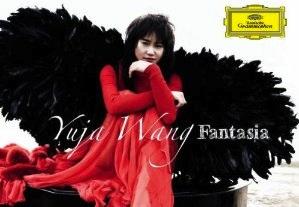 We are at the cusp of transition from one generation of pianists to another, but a name stands out as exception to clear distinction between grand old musicians and brilliant young talent. Yuja Wang doesn't fit into either of those (arbitrary) boxes.

At only 25, Yuja (she prefers to use her given name in second reference, the patronymic Wang not being distinctive enough) is an old soul, and seemingly in the vanguard for a long, long time. In fact, it has been a dozen years — half her life — that she has been winning international contests and hearts around the world, plus engagements with major orchestras, so she is neither a newcomer nor a member of the ancien régime. She is what she is, one of the finest pianists — and, importantly, musicians — of our time.

And she has now produced her fourth Deutsche Grammophon CD, which is the subject of our sermon today. Fantasia follows Sonatas & Etudes (2009), Transformation (2010), and Rachmaninov (2011).

It is a varied, capricious, collection of miniatures, just a few minutes each, the longest being a 10-minute tribute to Mickey Mouse (please wait for the explanation). At any rate, quite a change since the large-scale collection of Transformation.

Almost all tracks come from Yuja's large storehouse of encores; she needs many because her recital audiences unvariably demand — and almost always — receive them.

Four brief Rachmaninov pieces lead the way, played with unshowy brilliance, power, and her usual complete authority over the keyboard. The stormy Étude-tableau in A Minor Op. 39 No. 6 is a grand calling card; Op. 39 No. 4 is swift, playful; Op. 39 No. 5 has a quiet, but persistent romantic sweep.

Élégie in E flat minor Op. 3 No. 1, wisely slipped in between No. 4 and No. 5, is meandering, Chopinesque, a change from the mood shared by the Étude-tableaux.

Scarlatti, a Yuja perennial, appears here only with the two-minute-long Sonata in G Major K. 455. It is an irresitible melodic cascade of pearls, and it is over before you can catch your breath.

One of Yuja's heroes, Vladimir Horowitz, is responsible for two transcriptions: the Gypsy Song, from Bizet's Carmen, and the CD-closing virtuoso Dance macabre by Saint-Saëns (in Liszt's arrangement). The Carmen excerpt is marked "White House version" because it became famous in Horowitz's televised White House concert in 1978.

There are many other cuts, including a superb collection of five Scriabin miniatures, but let's get back to Mickey Mouse. Everybody's favorite rodent will inevitably come to mind while listening to Yuja's tempestuous The Sorcerer’s Apprentice, in Victor Staub's arrangement.

There is meaning behind the selection: Disney's Fantasia, writes Shirley Apthorp, "along with a performance of Swan Lake, was her first encounter with classical music as a child, and she always enjoys the frisson of recognition that runs through an audience when the familiar melody emerges."

If you check the Music News column on April 17 you will find out where and how you can see the Disney Fantasia on the big screen again in San Francisco. Meanwhile, enjoy Yuja's tribute to it.