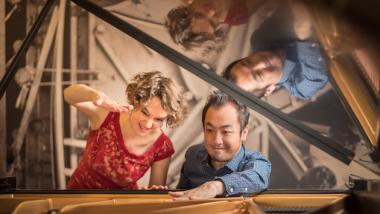 On Saturday, January 28, 2017, at the San Francisco Conservatory of Music the piano duet ZOFO (Eva-Maria Zimmerman and Keisuke Nakagoshi), gave the world premiere of a remarkable new suite of works composed for them. Called ZOFOMOMA, the suite is a 21st-century twist on Mussorgsky’s Pictures at an Exhibition. Mussorgsky wrote Pictures in response to works by a single artist, the Russian Viktor Hartmann. ZOFO reached farther afield for ZOFOMOMA, commissioning 15 composers from 14 countries to write movements responding to paintings by artists of their home countries.

During Saturday’s performance, the paintings in question were projected on a screen above and behind ZOFO. From halfway back in the hall, the details weren’t always clear, and a larger screen would have been nice; at the same time, it’s wonderful that the institutional and individual owners of the paintings granted permission for this use of the images. Multimedia performances don’t always work; this one did, in spades.

Every movement in ZOFOMOMA got a dazzling performance from Zimmerman and Nakagoshi. When these two play, they achieve such sonic, artistic, and pianistic unity that it’s hard to believe that there are two of them; rather, you get the impression of a single entity that somehow has 20 fingers.

In a nod to Pictures, Nakagoshi himself composed an Introduction and 14 Promenades that are based on Mussorgsky’s own Promenade theme, which depicts the Russian composer’s walk through a Hartmann exhibition. Nakagoshi’s Promenades, like Mussorgsky’s, are placed between the longer individual movements, and, also like Mussorgsky’s, they vary in mood and tone, reflecting or contrasting with the mood of the surrounding movements.

The 15 composers wrote marvelously inventive movements for ZOFOMOMA, each miniature stylistically distinct from the others. It was almost always clear what elements of the painting the composer was responding to. (It’s also true that the composers’ own program notes helped with this.) The Israeli composer Avner Dorman chose Reuven Rubin’s Dancing with the Torah at Mount Meron, and his movement certainly sounded like a dance, with distant echoes of Klezmer music, reflecting the ecstasy of the Torah and Torah study.

Kenji Oh, from Japan, composed a wonderfully delicate, serene miniature in response to Yokoyama Taikan’s austerely beautiful Sacred Peaks of Chichibu at Spring Dawn. In contrast, Sahba Aminikia’s Inspector’s Scrutiny, to a painting by Nicky Nodjourmi that looked like a cow being tied up for slaughter by men in business suits, evoked terror and menace, with hammering Erlkönig-like repetitions and irregular yipping sounds emanating from the pianists.

The Polish composer Pawel Mykietyn wrote a mysteriously hypnotic miniature, powered by a single-note ostinato that traveled around the keyboard, to accompany the blurrily enigmatic SM34 by Wojciech Fangor.

Three of the movements used prepared piano techniques, to quite different effect. Franghiz Ali-Zadeh’s Spring Morning in Baku, to a painting by Sattar Bahlulzade came across as militaristic; somehow, the piano strings sounded as though they were being snapped. In Samuel Adams’s Night Sea (for Agnes), written to an almost-monotone painting by Agnes Martin, objects laying on the strings created an almost electronic humming in a beautifully sustained work that reflected the calm of the painting.

And during Lei Liang’s Will you come to my dreams?, to a detail from Huang Binhong’s Landscapes, Zimmerman plucked strings and dropped objects of some kind — fabric? petals? other vegetable matter? — onto the strings, while Nakagoshi played. This was a remarkable piece, exceptionally reserved and introverted to start with, then exploding into shimmering cascades of sound.

Jonathan Russell’s Skeleton, inspired by a street painting by London artist Stormie Mills, sounded almost grotesquely as though the performers were playing two different pieces at once. His program note indicates that this was his intention, and he reinforced the grotesque aspects of the work by having Zimmerman play while standing behind and surrounding Nakagoshi, effectively trapping him between herself and the piano.

ZOFOMOMA was a mesmerizing 70 minutes of masterly pianism. Let’s hope that ZOFO is able to record the suite, or, even better, make a DVD. See images of the paintings and hear excerpts from the pieces here. A video trailer for ZOFOMOMA is below.