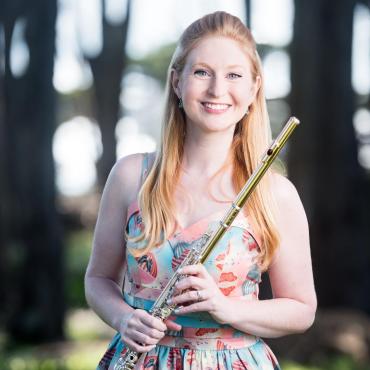 Abigail Sten Graham enjoys an active career as a flutist, teaching artist, and mentor. From the recital hall to the school classroom, she can often be found sharing the joy of music with others.

Abigail's goal as a teacher is to inspire confidence and artistic expression through the simple joy of playing the flute.  She spent several years in the Bay Area as the lead artist-in-residence for the San Mateo-Foster City School District.  There she organized the music program for the district's 16 elementary schools and worked closely with more than 1,000 young flute students. She also served as vice president of the San Francisco Flute Society and was director of the 2014 SF Flute Festival.

Abigail has been described as a "strong and focused" performer by the Santa Barbara News-Press.  She gave a solo performance at Carnegie Hall in 2017 as a first-place winner of the American Protégé International Woodwinds and Brass Competition. Graham was invited to perform at the 2018 NFA convention as a winner of the Convention Performers Competition.  Abigail has played with the North State Symphony, and she held the second flute position with both the Channel Islands Chamber Orchestra and the Debut Orchestra in Los Angeles.  For something different, she regularly played Irish dance music in State Street’s pubs during her time in Santa Barbara.

Graham now manages a large virtual flute studio, working with Bay Area students online.  She also serves community organizations as a substitute pianist.  When not making music, Abigail can be found in the gym or homeschooling her daughter.

All lessons are virtual.  Please visit https://www.abigailgrahamflute.com/virtualflutelessons for more information.