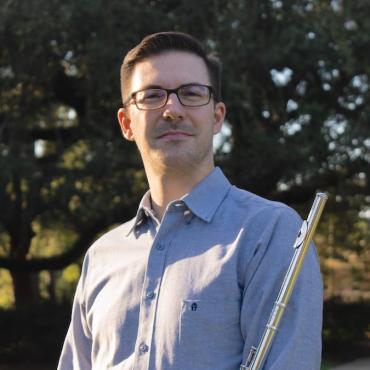 Dr. Alan Berquist is a flutist and educator based in Northern California on faculty at California State University, Stanislaus. He is also a student of Dalcroze Eurhythmics at the Marta Sanchez Dalcroze Training Center at Carnegie Mellon University with support from the Dalcroze Society of America. He performs with Ensemble 126, Etesian Duo, Bay Area Rainbow Symphony, and Awesöme Orchestra Collective. Past performances include  The American Opera Project, Brooklyn Wind Symphony, and the Albany (GA), Astoria (NY), Madison (WI), and Tallahassee Symphony Orchestras.

An advocate of new music, he has commissioned, performed premieres, and collaborated with composers Matthew Briggs, Viet Cuong, David DelTredici, Mark Fromm, Scott Gendel, Libby Larsen, David Maslanka, and David Stock. He serves as the Corporate Sponsor Chair and judge for the Flute New Music Consortium’s annual composition competition, frequently performs works of new composers. He also serves as the Composer Database Co-Coordinator for the Institute for Composer Diversity based out of the State University of New York at Fredonia. On the other end of the spectrum, Alan’s deep affinity for early music has led to the study of baroque traverso, recorder, and renaissance recorders, performing for early flute specialists Barthold Kuijken and Na’ama Lion.

I believe everyone has unlimited potential and capacity for music making. My energy goes into guiding musicians on their journeys, wherever that may be! With a commitment to clear communication, inclusivity, and respect, I believe that positive and challenging learning environments encourage the most meaningful growth. Flute isn't just about mastery of the instrument, but a powerful artistic and cultural voice that communicates new ideas, informs, questions, and expands our minds.

Lessons incorporate strong foundations in breath, tone, and technique through body awareness (kinesiology) in a constructive atmosphere. Personally tailored to each flutist, holistic principles from Alexander Technique, Body Mapping, and Dalcroze Eurhythmics are a gateway to having you perform your best!