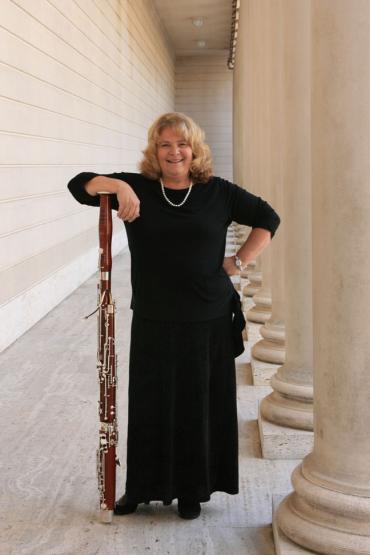 Bassoonist Beverly McChesney is a San Francisco native who has performed professionally in the San Francisco Bay Area for over 50 years. She attended San Francisco State University and earned a Bachelor of Music Degree from the San Francisco Conservatory of Music. She is the founder of the Bellavente Wind Quintet which specializes in educational concerts for children. Beverly produced Bellavente’s award winning CD for children called “Frogs and Friends” and received a Parents’ Choice Approved Award. She performed for 15 years with several resident woodwind quintets for the San Francisco Symphony Adventures in Music (AIM), performing 130 concerts to 15,000 school children each season, including 5 seasons with the Bellavente Wind Quintet. Beverly has performed with nearly all the regional orchestras and Broadway show orchestras in the Bay Area, including 23 years as principal bassoon of the Women's Philharmonic Orchestra based in San Francisco. She also performed extensively with Quinteto Latino, Twin Pines Woodwind Quintet and the Women’s Philharmonic Woodwind Quintet. Beverly is the Santa Rosa Junior College Adjunct Faculty bassoon instructor and plays principal bassoon in the Ukiah Symphony Orchestra. She loves to spend time with her husband, large family, 4 grandchildren and 3 lazy cats.