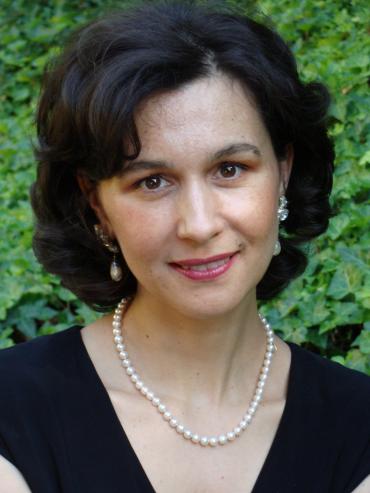 Elena Yakoubovsky, a lyric-spinto soprano, made her operatic debut in 2005 as Tatiana in Tchaikovsky's Eugene Onegin. She has recently appeared as Lisa in Tchaikovsky's The Queen of Spades at West Bay Opera, Annina in La Traviatta with Capitol Opera, as Mimi in La Boheme and as Micaela in Carmen with Danville Lyric Opera. She was the featured soprano soloist in Mozart's Coronation Mass in C Major at St. Timothy's Concert Series in Danville, for whom she returned in a solo recital last November.
A San Francisco Bay Area favorite, she has delighted audiences with her expressiveness and magnetic performances. She was noticed quite early by critics, and after her performance as Christina in Zeller's Der Vogelhandler, one noted that "her vast reservoir of power and lightness....portends a professional career as a dramatic soprano." To hear samples of Miss Yakoubovsky singing please go to You Tube or elenayakoubovsky.com

Miss Yakoubovsky graduated from the San Francisco State University School of Music in 1998. and is presently studying with Master Teacher David Jones. Elena teaches in her private studio in the East Bay. You may read more about her technique at elenasbelcanto.com

Specializing in the Swedish - Italian School of Singing

During a lesson you can expect to learn:

I graduated from the San Francisco State University School of Music in 1998 and have studied the Swedish-Italian technique under the tutelage of master teacher David Jones. Samples on YouTube or www.elenayakoubovsky.com

My technique comes from the Swedish - Italian school of Bel Canto (Italian for beautiful singing) from which singers like Kirsten Flagstad and Jussi Bjorlig emerged.