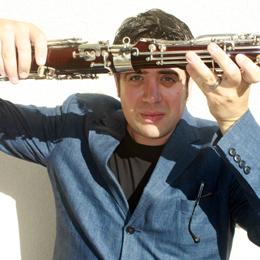 Scott Alexander Blakley draws upon a varied and atypical background to connect with a wide array of audiences and students.

He began playing bassoon at 15 and had previously played saxophone and guitar. Just a few years later, Scott found himself at the Peabody Conservatory of Music. In addition to his studies in bassoon, Scott minored in renaissance lute and also became involved in the performance art scene in Baltimore. After his freshman year, he went on tour with The American Wind Symphony Orchestra, performing in over 30 cities in the United States and Canada.

The following summer, Blakley was awarded a grant from Peabody to start and run a summer chamber music program in Minnesota. The program was uniquely designed to group musicians by goals and motivation, rather than skill levels and auditions. He coached ensembles with musicians ranging in age from middle school through retiree, and arranged performances in barnyards and hospitals.

Upon graduating, Scott’s focus turned to songwriting and performance. He moved to Baltimore and later New York, where he performed hundreds of shows all over the east coast and toured nationally. He released his first 4 recordings before moving to Oakland with his wife in 2010.

Since moving to the Bay Area, Scott has become much more active as a bassoonist and teacher. As a freelancer, he has played with numerous orchestras and recording sessions as well as several local bands including Green Day and Sly and the Family Stone. Scott was also commissioned to compose and perform music for Indra’s Net Theater’s world premier of Delicate Particle Logic and was nominated for two awards,“best underscore” and “best sound design,” by Theater Bay Area. He has also released two more albums as a singer-writer.

Scott’s private teaching also expanded after moving to Oakland, where he is now one of the busiest teachers in the area. He has served as a clinician in several schools and his students have won auditions for numerous honor bands, major conservatories, and summer festivals. He has served as an adjudicator for California All-State bands, Oakland Youth Orchestra, and several solo and ensemble festivals. His students have included everyone from beginners and professional musicians, middle school students and retirees.

In addition to music, Scott enjoys spending time with his wife and son, vegan cooking, vegan eating, tennis, travel, and writing about himself in third person.

My teaching is focused on practice technique so that students at any level of ability and motivation can get the most out of the time they spend with their instrument.