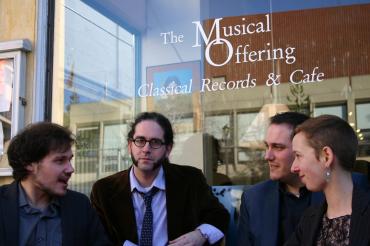 The Town Quartet was born in the Bay Area's town, Oakland, as a fusion of four musicians and their love of chamber music. Formed in 2011 by violinists Garrett McLean and Corey Mike, violist Jacob Hansen-Joseph, and cellist Lewis Patzner, the group added Mia Bella D'Augelli in September 2012 after Garrett migrated south to his homeland, Los Angeles.

Since its beginning, the Town Quartet has held a weekly Sunday afternoon residency at the Musical Offering Café in Berkeley. Performing in casual settings like this, as well as presenting formal concerts, has allowed us to voice our work with pieces from the 17th century to the present. For us, doing the quartet is about fun, friendship, playing music we love in a way that makes us proud, and improving as individual players and as a group.

In addition to the Musical Offering Cafe, you might catch the Town Quartet at venues like the Starry Plough Pub, Vessel Gallery, St. Paul's Lutheran Church of Oakland, and the Legion of Honor.

Contact Email:
[email protected]
Member Names:
Lewis Patzner
Group Type:
String Quartet
Available For:
Concerts, parties, weddings, proposals, funerals.
We play at the Musical Offering Cafe Sundays from 1-3. We have played many quartets, trios, duos, etc. We have pop arrangements and skills should you require them, but our main thing is Classical.
Take Requests:
Yes
within reason
Pianos Required:
No