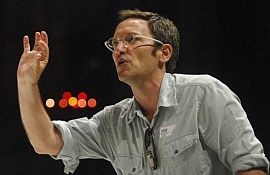 Music Director Marin Alsop is programming her next Cabrillo Festival of Contemporary Music (Aug. 2-16) as a summit for new works from composers around the world.

"Nowhere else are so many new pieces performed at one time, to such a warm and devoted audience," says Festival Executive Director Ellen Primack. "Composers, professional orchestra players, and audiences travel from across the globe to participate in two weeks of exhilarating, intense, and wonderful music-making. Open rehearsals, composers' forums, prerehearsal talks, and a chance to meet and hear from the greatest contemporary composers of our time make the Festival a profoundly meaningful educational and social experience."

The festival will also mark the 14th anniversary of Jerry Garcia's death on August 9 with Lee Johnson's orchestral tribute to the Grateful Dead, Dead Symphony, No. 6.

The entire concert is now available for streaming: the first half, featuring music by Brahms, Tchaikovsky, and Wagner, and the second half, including a dazzling performance by Yuja Wang and soprano Measha Brueggergosman, singing the unsingable.

Note the lightbulb in the upper right corner: clicking on it will dim the window except for the streaming. 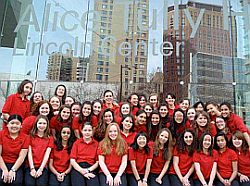 Together with the Young People's Chorus of New York City, SFGC presented the premiere of Berkeley composer Gabriela Lena Frank's Two Mountain Songs. In addition to Frank, other local artists were featured prominently on the program, including Henry Mollicone's National Weather Forecast, and the premiere of "Blue Skies" from Irving Berlin's Just Imagine, arranged by Dwight Okamura, and played on the cello by Emil Miland.

On Sunday, May 3, the SFGC's Alumnae Chorus presents Faces of Femininity, the music of Holst, Verdi, Mendelssohn, Szymko, Larsen, and others. The venue is St. Mark’s Lutheran Church in San Francisco. See the City Box Office for tickets.

Daniel Levenstein's Chamber Music San Francisco is having a dynamite debut season at Herbst Theatre. Having moved from the much smaller hall in the 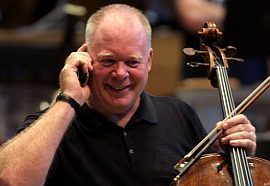 Legion of Honor, CMSF is filling Herbst with world-class programs.

From the season-opening program by the Prazak Quartet (Janáček!) with Menahem Pressler, to last weekend's superb Beethoven-Mozart-Webern-Ravel concert by the Emerson Quartet, there have been genuine and well-deserved ovations at event after event. These are the attractive prospects at the halfway point:

On top of all its attractions, Chamber Music S.F. is offering some of the more affordable concert tickets in town, in the $27-$44 range.

Published responses to such Shen Yun Performing Arts productions as the Chinese New Year Spectacular are routinely ecstatic. Some audience members and at least two critics think otherwise, after witnessing heavy-handed propaganda from Taiwan, and a variety show ranging from fairly decent numbers to those of lesser quality.

I am one of the two "negative ones," the other is Sarah Crompton, of The Telegraph.

At any rate, Shen Yun's "dazzling spring spectacular presentation" is coming to the San Jose Center for the Performing Arts, May 15-17, and you can form your own opinion. 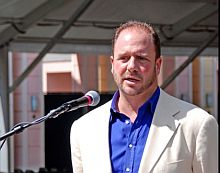 IMG represents some of the top artists appearing with San Francisco Opera, San Francisco Symphony, and S.F. Performances. As of this writing, there is no indication that IMG activities or Festival del Sole will be impacted by Wissman's involvement in the alleged securities fraud.

According to Cuomo's office, he is "cooperating in the ongoing investigations by the New York attorney general's office and the SEC." Wissman will be sentenced at a later date. 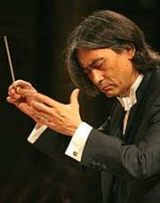 Former Berkeley Symphony Music Director Kent Nagano, 57, has extended his contract as general music director at the Bavarian State Opera in Munich until August 2013. He will also continue as the conductor of the Bavarian State Orchestra, which is both the house orchestra and a major symphonic organization.

Nagano was lauded by the Bavarian Culture Minister for the public's enthusiasm for his performances of Strauss and Wagner as well as "bringing the music of our time closer."

During his three decades of association with the Berkeley Symphony — as well as his work with orchestras and opera companies in Lyon, Manchester, Berlin, and elsewhere — Nagano has been a prominent advocate of contemporary music.

He is due back here next month for two concerts with his Berkeley Akademie, on May 17 and 31.

The San Francisco Opera Guild presents "Springtime in Paris: An Evening Honoring Frederica von Stade" on May 13 at the Four Seasons Hotel. The black-tie gala honors the mezzo for her dedication to music and arts education; all proceeds support the Guild's education and community outreach programs that reach over 50,000 young people in 200 schools throughout Northern California every year.

For information about tickets, see the Opera Web site.

Orlando's 51-year-old company is a victim of lower ticket sales, reduced contributions and defaults on pledges, said Jim Ireland, the company's president and CEO. The group announced three weeks ago that it could not continue if it did not raise $500,000. A recent three-week fund drive brought in only about $25,000, spokesman Andy Howard said.

"The lack of broad community support indicates that a resident professional opera company is not a priority of Orlando in these difficult times," said Joy Barrett Sabol, the opera board's chair.

The opera had been expected to be one of the major tenants of the proposed Dr. P. Phillips Orlando Performing Arts Center (DPAC), along with Orlando Philharmonic, the Festival of Orchestras, Orlando Ballet, and the Broadway Across America touring series.

"It's a really outrageously tough year," said Philip Lauriat, director of the professional opera company, which staged two operas each year at the Capitol Center for the Arts and the Music Hall in Portsmouth. "Our audiences have been good, our reviews have been really terrific, but tickets don't cover half of our costs. For us to be able to put on an opera, it's pretty close to $150,000. We didn't see any way to raise that in this current economy." 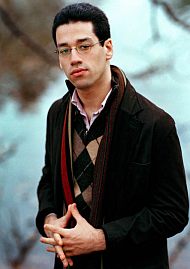 "Bis!" is a demand for encore. Biss is Jonathan, a 28-year-old pianist who played a fascinating recital Saturday at Herbst Theatre, under the aegis of San Francisco Performances.

Before the second half — an all-Chopin offering, capped with a splendid encore of the Andante from Mozart's Sonata No. 15 in C Major, K. 545 — Biss presented a consistently compelling program, brilliantly played. Mozart's Sonata in C Minor, K. 457, impressed with the opening Allegro that was robust, powerful, quite different from the usual "elegant" Mozart — and Biss' approach was all to the good. The Adagio and closing Allegro were less of the "in your face" school, but again, "just right."

The most impressive part of the evening was a combined performance — that is, played without a break — of five pieces from György Kurtág's Játékok (Games) and Schubert's rarely played Sonata in C Major, D. 840, Relique.

Displaying the same passion in speaking as in playing, Biss talked briefly about the Schubert, speculating that one reason for its rare appearance in concert halls is that it's "unfinished," having only two movements. Rather than a disadvantage, Biss said, having only the Moderato and Andante gives the sonata a completeness of its own, addition to which would have been impossible or unwise.

The clarity, precision, and outstanding articulation in playing Kurtág and Schubert were deeply impressive. The crystalline piano miniatures are reminiscent of Bartók's Microcosmos.

They were Antiphony in F-sharp from Book II, Les Adieux (in the Manner of Janacek) from Book VI, Portrait (3) from Book III, La Fille aux cheveux de lin—enragée from Book V; and the amazing Birthday elegy for Judit, for the second finger of her left hand from Book VI. This last piece bore out Kurtág's famous saying that "I keep coming back to the realization that one note is almost enough." It was more than one note, a gorgeous little piece, all played with one finger.

To hear Biss on-line, there are lots of samples on his Web site. For Kurtág piano works, see these and other YouTube samples.

The 2009 Pulitzer Prize for Music went to Steve Reich, for his 2008 Double Sextet, described by the jury as "a major work that displays an ability to channel an initial burst of energy into a large-scale musical event, built with masterful control and consistently intriguing to the ear."

Other finalists were Don Byron and Harold Meltzer. The jury making the award: