Milnes, who is music director of the UC Berkeley Symphony Orchestra, came to SFCMP in 2002 and has recruited seven musicians, representing one-third of the ensemble. Under his leadersip, SFCMP presented 24 world premieres, including 17 works commissioned by SFCMP from such eminent composers as Edmund Campion, Philippe Leroux, Jorge Liderman, and Liza Lim.

Milnes also led the ensemble in the first U.S. performances of 31 works by composers from 14 countries. While focusing his programming on pieces written within the last decade, Milnes also conducted influential older works, including Pierre Boulez’s Le marteau sans maître, John Cage’s Third Construction, Gérard Grisey’s Vortex Temporum, and Iannis Xenakis’s Medea Senecae, the latter in collaboration with Chanticleer. Milnes has led the ensemble in making four recordings, including, most recently, a CD of music by Edmund Campion.

Frey himself is also leaving SFCMP, Christopher Honett taking over the job on July 15. Without word on Milnes' future plans, it is not known at this point if the two changes at the helm of the ensemble are related.

Gordon Getty’s elegant home provided the perfect setting for the festivities on Tuesday evening. Following cocktails and hors d’oeuvres, world-acclaimed pianist Wu Han generously made time in her touring schedule to perform — jetting in from New York on Tuesday morning and flying back on that evening (during dessert) to get back for rehearsals on Wednesday — but not before inspiring the capacity crowd with four excerpts from Tchaikovsky’s Les Saisons (The seasons) and words of praise for SFCV’s mission of reaching music lovers of all kinds.

Han then invited 13-year-old Palo Alto native Hilda Huang, who is an alumna of Han’s [email protected] Chamber Music Institute and a student in the Preparatory Division at the San Francisco Conservatory, to join her at the keyboard for a rollicking four movements from Samuel Barber’s Souvenirs for four hands. The performance was nuanced, energetic and downright astonishing — and testimony to Han’s deep commitment to building a future for classical music.

Dinner in the columned inner courtyard of the Getty home followed. SFCV Board member Mary Falvey presented Getty with an etched glass “tombstone” — a traditional investment-industry gift to lead investors to mark its initial public offering — to honor Getty’s generous commitment to SFCV since its inception and to commemorate the site’s rebirth. Getty responded with a rare, inspiring speech to the gathered guests, culminating in his personal conviction that “we can do this!” SFCV board and staff members then serenaded Getty with their own “Ode to Gordon,” sung to the tune of Beethoven’s iconic Ode to Joy. Musically, perhaps, it wasn't quite on a level with Han and Huang's earlier performances, but Getty appeared to enjoy it immensely, and it proved a fitting end to this lively event. 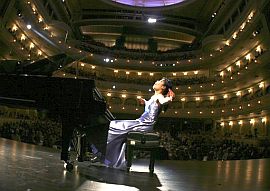 It was surprising to run into Ken Iisaka Sunday at the West Bay Madama Butterfly because I firmly placed him in Texas during the current 13th annual Van Cliburn International Piano Competition. If you blog about an event, I assumed, you may just as well be on site.

Turns out Iisaka is heading to Fort Worth for the finals, but meanwhile the Cliburn blogs are being run from a distance: James McQuillan in Portland, Ore.; Michael Hawley in Cambridge, Mass.; Iisaka from here — with one in-house blogger, Mike Winter, in the hall. How to blog from afar? By watching the streaming Web cast.

The webcast, Iisaka says, is excellent, "the sound quality is more than adequate for me to identify the piano, or to hear a cell phone going off during one of the performances." The video end is definitely good, right up there with Medici.TV quality.

Webcasts are streamed twice a day, at 11 a.m. and 5:30 p.m. PDT, with a schedule and pages available for individual pianists. Semifinals begin on May 28, finals on June 3, and the winners will be announced on June 7.

The "Very First Concerts" series by the San Francisco Chamber Orchestra introduces children between 3 and 7 years of age to live classical music. There are short selections, a central theme, hands-on musical activities, and tumbling mats ... for starters.

The free series has attracted capacity crowds for previous "Meet the Orchestra" and "All About Rhythm" concerts. The Chamber Orchestra is now adding two events at Crowden: "Dance to the Music" on June 6, at 11 a.m. and noon.

The program features "dancing music" by J.S. Bach, the orchestra to be led by Music Director Benjamin Simon: "Everyone in the audience will get a chance to learn three dances, led by the exciting pair of Rachel Baker and Jeremy Harris. Put on your happy feet and join us for these friendliest of classical concerts."

Read a remarkable tribute to the late Beverly Sills on her 80th birthday by Gerald Waldman, including this passage: 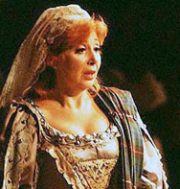 Sills possessed at her peak one of the most beautiful, shimmering, opalescent soprano voices of the twentieth century, frequently combining both a beautiful mezza voce, and seamless legato with a shimmering high pianissimo, which could break your heart with its profound beauty.

At her absolute peak, she could both astound you with the articulate brilliance of her coloratura singing, and the profound depth of expression she brought to each role.

Also, a superb linguist, she especially excelled in Italian and French, but also sang superbly in German and English, which enabled her to sing an extraordinarily wide range of roles.

Medicini and Opera on the Puccini Sesquicentennial

We routinely read exotic publications so you don't have to, and in Medicine and Opera, we found Thoughts on the Puccini Sesquicentennial, which has nothing to do with medicine, but has an interesting side-by-side analysis of Puccini and Verdi.

Christophe Laudamiel, who wants to turn fragrance into high art, reports The Wall Street Journal, has labored for two years on 23 scents that will last for just half an hour.

Laudamiel, a French fragrance designer, is collaborating on a "scent opera," a new performance art that pairs music with a carefully orchestrated sequence of smells, some pleasant and some real stinkers. The opera, Green Aria, will test the boundaries of scent art when it opens at the Guggenheim Museum in New York on May 31.

"I thought it was insane," says Icelandic composer Valgeir Sigurdsson, who paired up with another composer, Nico Muhly, to create music based on the scents.

Highlights of the season include: four world or U.S. premieres; new and recent works written especially for the ensemble by John Harbison, Ken Ueno, Donnacha Dennehy, Philippe Leroux, and Manolis Manousakis; a concert and lecture devoted to Luigi Nono’s work for violin and electronics; recent music from Switzerland, Germany, and France; and Tan Dun’s Water Music, in which four percussionists use water to manipulate sound.

Two fall concerts include works that the ensemble will perform at the MANCA festival in Nice, France, on November 15.

Harrell Is Soloist in Napa

Cellist Lynn Harrell joins the Napa Valley Symphony, conducted by Music Director Asher Raboy, at the final concert of the season, which is dedicated to the memory of the late winemaker and philanthropist Robert Mondavi.

Harrell is featured in the Dvořák Cello Concerto; the program includes the Stravinsky ballet score Jeu de Cartes (The card game), and Mendelssohn’s overture to A Midsummer Night’s Dream. The May 29 concert takes place in Yountville's Lincoln Theater.

"Tony [Amato] directed and conducted; Sally sewed costumes, paid the bills, and often took to the stage herself. Originally, they passed a hat for donations. Later, they charged $4 a seat, the price a young reporter named [Ray] Suarez paid to see his first opera and write a profile of the company 31 years ago."

So goes a great PBS feature with Suarez on the closing of Amato Opera, a unique institution (with just a faint resemblance to our own Pocket Opera), which has just closed after 61 seasons.

'Ethnic Music' Close Up and Personal

The figures are staggering. When the 31st annual San Francisco Ethnic Dance Festival runs June 6-28 in the Palace of Fine Arts, 500 musicians and dancers 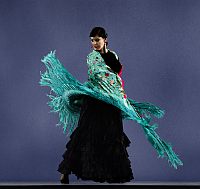 from 37 companies (chosen from among hundreds of auditioning artists) will give 12 performances of four programs. Over the past three decades, the festival has presented 14,000-plus artists from more than 600 audition-winning organizations.

What is "ethnic music"? Wouldn't Beethoven be an ethnic German composer? "Non-Western"? How does that work geographically? Oh well, it's one of those difficult-to-define terms, but we all sort of know what it is. Maybe.

Beyond the figures and terminology, there are the people. They make, and never break, the festival.

When Carola Zertuche (now artistic director of Theatre Flamenco) was a small child in Mexico, "my father gave me a record of old flamenco music and I loved it. I listened to this record every afternoon after school. Then one day I heard the same music but now it was on TV, and I saw the people dancing to it. I then went to see the same company live in Mexico City when I was about 14 years old. From that point nothing else was as important to me as flamenco dance."

"I started dancing because of the beautiful costumes and the elaborate jewelry ... but it soon became the involvement of my complete being — the physical, 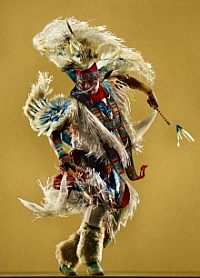 "I am a native of Havana, Cuba, and I am told that I have been dancing since my feet hit the ground." That's from Jose Francisco Barroso, artistic director of Obakoso Drum & Dance.

"We have lots of interesting dances this year," says the festival's Nina Sazevich, "including Gamelan Sekar Jaya, commissioned for a piece, doing a fantastic number accompanied by a jegog orchestra — giant bamboo marimbas — one so big that the players have to sit on planks suspended above it to strike it. The instruments were donated by the Grateful Dead's Mickey Hart."

Paths leading the artists to the festival are varied and colorful. Barbary Coast Cloggers Artistic Director Matt Ellinger first came across the group two decades ago in "a now defunct country-western gay bar called the Rawhide. I had been a tap dancer since I was a child, but when I saw clogging I simply fell in love with it. The music is often bouncy banjo and hot fiddle, and the spirit of fellowship among the men performing with BCC together was so uplifting."

Belly dancer Samar Nassar is a first-generation Lebanese American, who says the dance helps her stay connected to her cultural heritage. "I started because I felt awkward in my own skin. Belly dance helped me feel confident, beautiful and healthy. Today, 13 years later, I own Hipline Belly Dance studio in Berkeley, and pass that confidence onto my students."

Julie Mushet, executive director of the festival for the seventh season, marvels "year after year at the magic on the stage ... watching the dancers creating beautiful performances that are deeply moving to watch."

Her enthusiasm and dedication come handy at fund-raising time for the spectacular shows that need support beyond the box office income (from rather modest ticket prices of $22 to $44).