Leif Ove Andsnes is a pianist with an enormous repertory, ranging from classics to many contemporary composers, so you might presume that performing the Brahms Piano Concerto No. 2 in B-flat Major Op. 83, is just "part of the job." You would be wrong.
In advance of his four performances of work, May 8-11 at the San Francisco Symphony's Brahms Festival, Andsnes took a good part of his six-week vacation working on the concerto, which he is performing this year for the first time. Considering that the pianist is on the move, he says, about 250 days of the year, giving concerts and recitals around the world, it is significant that he would focus on the Brahms concerto during a brief vacation in his native Norway's picturesque mountains. Why do it?

Because it's a really tough nut to crack, Andsnes says: "The concerto is unique in a number of ways — as a symphony-concerto mixture, the fantastic melding of piano and orchestra, it is famously hard, with many challenges for the pianist. To study it, to get the fingering right, to master it, all takes time, but even more important and, again, challenging, is to get to the heart of the concerto."
Leaving Elephants Behind
Is "unique" the right word given that all he says about the Second Concerto applies equally to the more famous Piano Concerto No. 1 in D Minor, Op. 15? Andsnes says the challenges are similar but not equal, and calls attention to the 23 years that separate the concertos — the first written in 1858, at age 25, the second in 1881. "Brahms wrote the First Concerto when he was young," Andsnes says, "and he didn't have the same control of orchestration that's so evident in the Second, which is clearly not a 'concerto for elephants'," the pianist jokes, referring to the affectionate nickname for the Wagnerian-sized earlier piece. 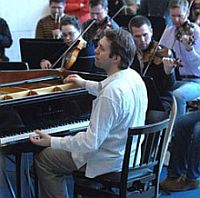 Leif Ove Andsnes at the piano

The composer himself, as quoted in Michael Steinberg's S.F. Symphony program notes, supports Andsnes' point: "'A second [concerto] will sound very different,' wrote Brahms to Joseph Joachim, rendering a report on the disastrous reception in Leipzig of his First Piano Concerto. A new relationship between piano and orchestra was noted, phrases like 'symphony with piano obbligato' being much bandied about." Of course, Brahms' droll description of the Second Concerto as "a tiny, tiny pianoforte concerto, with a tiny, tiny wisp of a scherzo" is somewhat of an understatement.

Here are some of Steinberg's thoughts about the opening movement:
Brahms begins by establishing the whole range of the solo's capabilities. The piano enters with a rhythmically cunning comment on the theme sung by the horn. This is poetic and reticent, though there is also something quietly assertive in the way the piano at once takes possession of five-and-a-half octaves from the lowest B-flat on the keyboard to the F above the treble staff. When, however, the woodwinds and then the strings continue in this lyric vein, the piano responds with a cadenza that silences the orchestra altogether.

Perhaps the greatest moment, certainly the most mysterious and original, of this magisterial movement is the soft dawning of the recapitulation. The horn-call and its extensions in the piano are now gently embedded in a continuous, flowing texture. When all this occurs, you remember the piano's earlier eruption into the cadenza, and the contrast now of the entirely lyrical continuation is the more poignant for that memory. One tends to think of this concerto as essentially declamatory and as the quintessential blockbuster, but the expression mark that occurs more often than any other is dolce.
Happy, Glorious ...
Andsnes, who performed the First Concerto some years ago, prefers the later work for its "glorious and happy music, which should be emphasized over the tragic, the heavy, the 'banging.' The First Concerto is different. Brahms' axe is sharp, it's hitting straight on, the creation of an angry young man, who wants to show what he can do. The First is more violent [than the Second], with its huge, explosive passages and 'naked music' for the piano."

The instrumentation of the First Concerto, Andsnes continues, "is not always good. That's why some conductors double the winds in the first movement. Otherwise, the single flute Brahms specified in answering the theme is simply not enough. The Second Concerto has no such problems. It's perfectly balanced, the interchange between piano and orchestra is a dialogue, not the 'fighting' heard in the First Concerto." 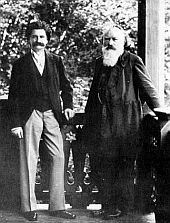 Andsnes, who is also preparing for performances of Brahms chamber music elsewhere, contradicts those who consider the composer "too romantic" or "excessively emotional." That, he says, is neither his understanding nor his interpretation. "Brahms' academic style hides emotion, imploding not exploding — especially when compared with Richard Strauss. While he sounds so private, there is something wonderfully human about not showing emotion, but allowing the singing voices, the richness, to come forth, so that often even a mediocre performance of Brahms can have great emotional impact."
Opening Up a Grieg Masterpiece
Andsnes' deeply involved, probing approach to music (see video) is reflected in all his preparations, regardless of the style or composer. Last month, The New York Times described him as "a pianist of magisterial elegance, power and insight in repertory." But his fellow Norwegian Edvard Grieg is a special case, beyond all others. In a Wall Street Journal article last month, Andsnes' work on the Ballade (which he also performed during his Davies Hall recital last week) is described in minute detail:
Composed from 1875-76, just after the Peer Gynt music, the Ballade was born of a difficult time in Grieg's life. Both his parents had recently died within weeks of one another. And to compound his distress, his marriage was deeply strained — Nina Grieg, possibly starved for affection, was apparently having an affair with the composer's elder brother. Hence the music is profoundly introspective, spanning a wide range of emotions from gentle resignation to grief and brutal anger.

Grieg's character, says Mr. Andsnes, was marked by contradictions in a variety of areas. "When he was at home, he longed to travel; when he was abroad, he longed to be home. He rejected the Norwegian church, yet he was always looking for faith. He steeped himself in Norwegian folk music, yet he disliked being labeled a nationalist. So for me the Ballade is the best example of Grieg's inner turmoil and the duality of his nature.
Andsnes, who turned 38 in April, has spent the past 20 years on the road, touring either by himself or in company with such prominent and eminently compatible collaborators as the violinist Christian Tetzlaff, with whom he made his San Francisco Performances debut in 1994. A native of the northern island of Karmøy in Norway, he now lives in Copenhagen and Bergen — when he is not touring, that is. Andsnes made his U.S. debut with the Cleveland Orchestra in 1989, and has received much recognition in this country as well as in Europe, garnering five Grammy Award nominations in addition to the Hindemith-Prize (1987), Preis der Deutschen Schallplattenkritik (1997), Royal Philharmonic Society Award (2000), and the Gramophone Award (2002).
Brahms Festival Events
Conducted by Michael Tilson Thomas the initial Brahms Festival program pairs the Second Concerto with the composer’s Symphony No. 4. (If you’re interested in hearing the concerto before you go, there are some lesser known but fascinating performances to recommend, especially the one by Nelson Freire and Riccardo Chailly on Decca.)

The third series, May 21-24, offers Geistliches Lied, Op. 30; Four Songs for Women's Chorus, Two Horns, and Harp, Op. 17, and Ein deutsches Requiem (A German Requiem), with soprano Laura Claycomb and baritone Matthias Goerne as soloists. Merola alumna Claycomb is a great local favorite as well as an opera diva around the country and in Europe, where she lives. Goerne is a celebrated recitalist, who will be heard May 17 in yet another of his acclaimed San Francisco Performances appearances.
Symphony Musicians in Brahms Chamber Works
An important, although not well-publicized, part of the Brahms Festival is the series of chamber-music performances by Symphony players in Davies Hall an hour before the main concert (all music by Brahms, except on May 15-16):

Meanwhile: The Brahms Requiem, in the composer's own arrangement for two pianos, is being presented by Chora Nova, Paul Flight artistic director. The soloists are soprano Rita Lilly and baritone Jeffrey Fields, and the pianists are Nalini Ghuman and Lino Rivera. The concert is on May 24, 8 p.m. at in Berkeley's First Congregational Church.