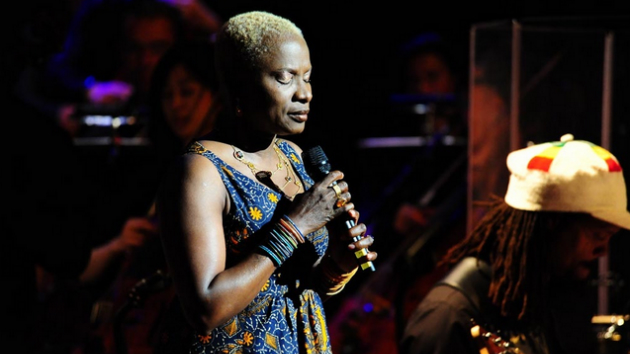 From Benin in West Africa, a country in population and size slightly smaller than Ohio, Angélique Kidjo has gone out to become a model citizen of the world.

Kidjo will celebrate her 55th birthday four days after her July 10 performance with the San Francisco Symphony singing songs by Gershwin, Philip Glass, herself, and others. She was raised by parents representing two of her native country’s linguistic and cultural groups, her father from the Fon and her mother from the Yoruba. She speaks and sings in both these languages, as well as in French (the official language of Benin), and she relocated to Paris in 1983 to escape the political conflicts of that era. In France, she met musician and producer Jean Hebrail, who became her fellow musician, co-songwriter, and lifemate, and she sang with an Euro-African jazz/rock band before signing as a solo act with Island Records and later Columbia Records. She has won two Grammy awards, the second this past February.

Performing regularly for progressive causes, Kidjo was named a UNICEF Goodwill Ambassador, and has also appeared at Olympic, World Cup, and Nobel Prize events. Her memoir, co-written with Rachel Wenrick and published by Harper Collins last year, bore a cover quote from Bill Clinton: “The only thing bigger than Angélique Kidjo’s voice is her heart.” She’s currently touring behind her newest release, Sings, which positions her and her repertoire in front of the Orchestre Philharmonique du Luxembourg, a role to be filled at Davies by the S.F. Symphony, under the baton of Edwin Outwater. SFCV got a brief phone chat with Kidjo from her Brooklyn residence.

I remember having first interviewed you during your San Francisco stopover in the early ‘90s.

I don’t count in years any more. I count in minutes, and that’s longer.

And how do you count the miles? You seem to be covering even more ground these days.

I’m still based in Brooklyn, but I have a place in Paris, and my family home in Benin.

How often do you get back to Africa?

Every year. I try to get there for my Mom’s birthday, on December 22. My mother is still dancing and driving us crazy!

What’s the state of affairs, and of music, in your homeland?

Things have been improving, because the roads have been rebuilt. The only thing we can export is cotton, and that’s why we’re not at war. And music there is up-to-date. It’s interesting to see young kids being entrepreneurs, using the Internet to put their music out there, without record labels. The Trio Teriba from Benin has sung with me.

So they’re proud of you.

When I won the second Grammy, they all said, “We should have a paid day off”. [She laughs heartily.] In your dreams — go back to work!

That Grammy was for Eve, on the Savoy label, and you’d dedicated it to the women of Africa.

Are the younger women musicians following your footsteps?

I told them, do what you love to do and what you know how to do. My role model was [South African diva] Miriam Makeba. She gave me the strength to stand and hold the microphone, but I don’t want to be her, I want to be me.

Is it special for you now to stand in front of a symphony orchestra? How did that come about?

I was doing a charity event in New York, and I met Thomas Walker, the artistic director of the London Philharmonic. He said, “I don’t know you, but your voice is haunting me, I’ve never heard something like that!” Later, he came back with the orchestra to Lincoln Center, and invited me to come hear them play Mahler. I said, “Mahler? You want me to jump out of my skin? Mahler pulls the hair out of my head!”

But after the show, we talked, and he said, “It would be interesting if you knew someone like Philip Glass, who could write a piece for you”. I said, “You want me to call him now?” I called him, and said, “Timothy would like to meet you”. Timothy was looking at me like, is this a stunt? But Philip and I used to have the same PR people, we became friends, with the fact that he speaks a little French, and we laugh a lot together. And I’ve sung for a show he does at Carnegie Hall every February, to benefit Tibet. So Timothy and I met Philip in his kitchen, on the Lower East Side, and I gave Philip three poems based on the creation of the world, according to Yoruba history. He finished his piece and gave it to me, and it was so beautiful and so complex, but it took three months for me to completely memorize it, because I don’t read music.

And you’ll be presenting the American premiere of this piece at Davies. What other challenges were there for you in his composition?

The notes that you don’t hear in traditional music in Africa, and rhythms he put together that never coexisted in Africa. But the main challenge to me was singing with an orchestra, without the [electric] amplification I do in my own shows. I had to adapt.

What about the material from Sings that we’ll hear at Davies?

The arrangers [Gast Waltzing, conductor on the recording, and fellow Luxembourg musician David Laborier] chose the songs from my older albums, and proposed me the arrangements, and I liked them. What I liked most was that you have 80 or more people play together something, that is in their DNA forever.

There’s no worry that the mass of an orchestra will swamp the folk roots of the music?

No! Music is music, it does not matter where it comes from. Why don’t we give it a try, and let people like it or not like it, but don’t call it names, like ‘fusion’, because that way you put it in the garbage before you even start listening to it.

Has anyone compared your voice to the conservatory-trained singers we more commonly hear with orchestras?

Yeah, people say I’m more organic. I use the voice I grew up with, and that’s the surprise to me here: the voice I thought I knew completely, with a classical orchestra, is bringing me to another avenue I was never on.

How will it feel to join our Symphony at Davies Hall?

And what will you be wearing? Something from Benin?

Oh, absolutely! But what it is will depend on how I feel.

That’s what my wife would say.

Yes, you should go ask her about it. [Laughs]

She’d probably want to know what clothes from Benin look like.

Will you be singing later today?

Yes, at the City Winery. It’s a benefit for Help Rebuild Nepal, with many other artists [including Joan Osborne and Bettye Lavette]. It’s amazing to see what music can wake up in every one of us.