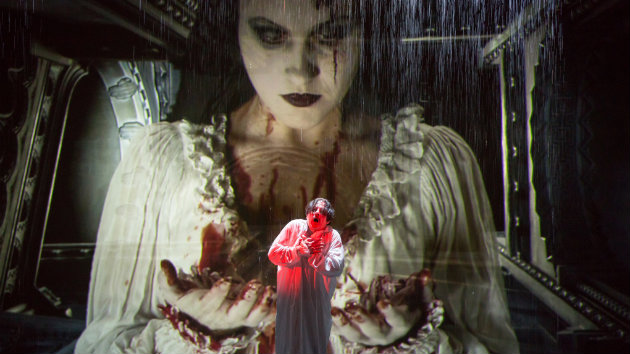 Gordon Getty didn’t slow down when he reached 80, two years ago this month. Aside from managing his family’s fortunes — he sold their company to Texaco in 1986 for $30 billion — Getty is a tireless composer and economic theorist who starts most days at 5 a.m.

He’s overseen the premieres of two of his short operas, Usher House with the Welsh National Opera at Cardiff in June of 2014, and The Canterville Ghost with the Leipzig Opera in May of this year. In the meantime, Getty has written and workshopped several choral works, mostly settings of classic poems. (He earned a bachelor’s degree in English literature at the University of San Francisco.) Usher House also was recorded and released on the PentaTone Music label in June 2013. It will receive its U.S. premiere in performances Dec. 8-13 at the San Francisco Opera, paired with Claude Debussy’s La Chute de la Maison Usher, based, like Getty’s work, on the 1839 short story of Edgar Allan Poe. (The SF Opera Guild is hosting preparatory lectures by Dr. Thomas Flynn this week, around the Bay.)

SFCV spoke with Getty during a lunch break from recordings he attended at Skywalker Ranch, by soprano Lisa Delan (who sang the role of Madeline on the Usher House recording and is director of Getty’s Rork Music Company) and baritone Lester Lynch.

What will be on Lisa’s next PentaTone album?

Today you’re in luck, because you’ll hear Lisa record three Randall Thompson songs, including “Velvet Shoes,” which I consider the most beautiful song ever written by an American.

You’ve been staying at the inn here at Skywalker, rather than traveling back and forth to San Francisco. What’s it like? 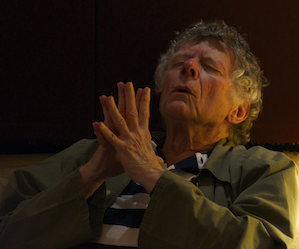 It’s rustic nostalgia, kind of 1920s, maybe like the place of [George] Lucas’ birth [Modesto]. I love my trips up here, which seem to be about once a year. Even though I had only one song to record, and it was done the first day [his gorgeous setting of the folk song “Shenandoah,” recorded by Delan], I hung out, partly to see my colleagues and partly to begin writing.

Not music, even though there’s a keyboard in my room, but one of my economic things. This one is going to be a book.

The growth theory of John Stuart Mill, which no one has noticed and we didn’t have the means to test. Now we do. [Getty’s economic papers will be available, as of Dec. 16, at http://www.ifalstaff.com.]

I guess we shouldn’t stray too far from Usher House. You’ve been waiting a while, haven’t you, to have it performed near your own house.

San Francisco Opera is a step up, even from Cardiff. But I have the advantage that, since Cardiff, I’ve been able to tinker with it. In Cardiff, the production was way too modern for my taste, so I asked the producer [David Pountney] to tone it down this time.

How was the modernism manifest? Did you as composer have any part in that?

I was not at all faithful to Poe. But, in a way, I was very kind to him, because I made him the narrator, and I made him noble! I made Poe and Roderick Usher exemplars of antebellum chivalry and gallantry, deferential, humorous, and brave.

And I could sense, from the recording, a nice collegial relationship.

Yes, I made them both the kind of man you’d want your daughter to marry. And I made Madeline [Roderick’s sister] mad, which she isn’t in Poe. But again, pure. And like Debussy himself, I took the Doctor, who’s rarely mentioned in the story, and made him evil.

Are you comfortable situated next to Debussy?

Yeah, I love the contrast. For the Debussy, the [video projections, by David Haneke] are all outside, with white walls. While in Usher House, it’s all inside, and dark. Roderick Usher makes the point to the visitor [Poe] that in effect, the family and the house are somehow one. 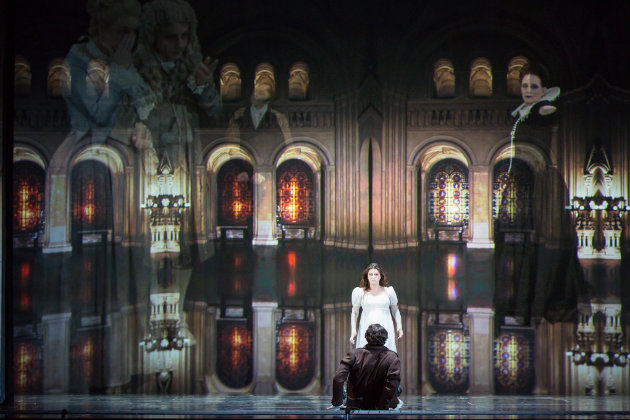 When I interviewed Brian Mulligan [Roderick Usher, baritone], he was very excited about doing the two Ushers, and he had already seen where the differences lay. It seemed that the Debussy was more like an old-fashioned horror show, while yours was more like a contemporary psychodrama.

I see it as a story of courage and redemption.

And those are values you live by.

Yeah, courage under fire! I don’t say I practice them, but I know when I see them.

I bet you’ve had to practice them at times.

What can I say? You try to have a decent report card to turn in to St. Peter.

Each of us is his own St. Peter.

Have you tinkered with the music since Cardiff?

In Scene One, and at a few other moments, I felt the orchestration could be more effective. Bruce Munson, who is my copyist and a composer in his own right said, “Don’t you think you need reinforcement here and there?” Listening to my music in general, I feel sometimes it lacks enough resonance and richness and depth, in just the sheer sound. And so, I’ve been writing a little more bass, pedal points, stuff like that. It doesn’t change the harmony, though.

You had a celebrity Attendant, Benedict Cumberbatch, on your recording of Usher. Will there be any such for San Francisco?

You don’t really need the Attendant. It’s shame to waste a whole salary on the Attendant and let him have just 12 lines [of speech].

Boy, have you been having a great day! I loved everything you did!

Lynch: I don’t want to interrupt you.

That’s okay, the more variety there is to what I transcribe, the happier I am. And Gordon Getty knows from baritone anyway, he is one.

Lynch: With a great falsetto! I’d like to find some places in my arias where I could use that.

Getty: Almost any of the Verdi operas. Because [Robert] Merrill, bless his heart, couldn’t sing softly, so he couldn’t make that impression. But [Leonard] Warren could, because he had that tremendous dynamic range.

For The Fall of the House of Usher, the pairing in Cardiff, did you see reviews?

They’re all published on my website [http://www.gordongetty.com]. If Lisa [Delan] is following instructions, I said: Every goddamned review, good, bad, or indifferent, has got to be on my website. I don’t want to be known as someone who cherry-picks.

That would encourage all kinds of evil rumors.

Yeah. And here’s an interesting fact I want your comment on: Most critics, even the most prestigious ones, arrive with academic credentials only. How many of them are known as performers or composers?

That makes it all the more surprising that most of them know what they’re doing. But there are tin ears at every level.

Including composers, audiences, and impresarios.

Henry Fogel knows what he’s listening to. And Bob Commanday did! He had a background in music [including choral conducting].

He was a solid reviewer.

And he was a close friend of mine. He gave me some bad reviews; so what?

What more music do you have for us?

There are a lot of things for choruses, stuff I’ve written that has not yet been performed, much less recorded. I’ve found a few texts for operas, one written by a person I never met. But I hate to set the works of living people, except me, because I don’t want disagreement.

Disagreement is disagreeable to you?

It cramps your style. God almighty, I have to be free to change my mind! And that kind of problem goes away if I’m dealing with the dead.

Freedom is a vital condition for your creation?