“I always try to encourage a balance in the way people look at what I’m doing,” says Mason Bates. That’s not as easy as it sounds, when you take a closer look at what this 34-year-old Guggenheim Fellow and recent UC 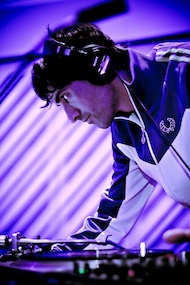 Berkeley Ph.D. recipient has been up to. He’s a composer currently engaged in residencies with the San Francisco and Chicago symphonies, and his Desert Transport just opened this year’s Cabrillo Festival of Contemporary Music. But he also appears as DJ Masonic, spinning and mixing electronica on turntables at late-night clubs and gala events from SOMA to Florida to Portugal. It’s that very same embodiment of 21st-century embrace of technology, combined with a lush, evocative approach to melody and orchestration evocative of older American composers from Virgil Thomson to Aaron Copland to John Williams, that makes Bates such an exciting and welcome worker in the new-music idiom. He spoke with SFCV from the home he shares with his wife, Jamie, in the Rockridge neighborhood of Oakland.

It took a couple of calls for me to reach you.

Well, I’m just working on this piece for Chicago, and I lost track of time.

So tell me a bit about the piece.

It’s called Alternative Energy, and it’s four movements in about 25 minutes, with each movement set about a hundred years apart.

Will it involve electronics, as many of your pieces have, with you being on stage with a laptop?

Primarily with the “present-day” movement. I got some great samples from a particle accelerator outside Chicago, called Fermilab. And there’s a movement after that, with techno eruptions. I’m gonna do the premiere. But none of my pieces that have an electronic component really require my being there. Along with the rental of the sheet music comes a download link that has a little piece of software that can work on a laptop; and a percussionist, or the conductor, can just hit a few keys on the Mac, connected to a couple of speakers onstage.

How do you score for electronics?

I have a couple of single-line staves that run underneath the percussion section. If it’s rhythmic material, I’ll try to give a simplified version of it. But when it gets to be more atmospheric, such as earthquakes rumbling [in Music From Underground Spaces, 2008] or, in the case of the San Francisco Symphony piece [The B-Sides, 2009], some dialogue from a NASA recording, I find a way to slip that in over the stave, some dialogue appearing here and there, or a wavy line for the earthquakes.

Can one become a virtuoso on the Mac?

When you have a real acoustic instrument and you set it next to an electronic instrument, there’s no comparison in terms of the musical, technical, and virtuosic demands. But the part that I (or my counterpart in the percussion section, if I’m not there) has to deal with requires the same kind of precision any other percussionist might have, who might not have that much bass drum per piece, but has to get it right. The electronics work within the orchestra, like a section. Because it’s really not like a “concerto for electronics,” ever; it’s music for an orchestra with a new element.

Have you gotten much in the way of verbal feedback from conductors and orchestra members?

I’d be pretty tacky if I were patting myself on the back.

Try to put your modesty aside.

On YouTube, when you were talking about Mothership [premiered this year by Michael Tilson Thomas and the YouTube Symphony, in Sydney, Australia], you said you didn’t discover orchestral sounds in a symphonic context at first. 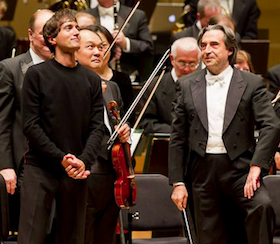 At some point, probably in late middle school or early high school, I actually started to go to see the Richmond Symphony in Virginia, where I grew up. But before that happened, the orchestra was only something I heard on Pink Floyd or Moody Blues or Beatles albums. And it always captivated me — that kind of seamless fusion of orchestral and electronic elements, handled in a really interesting and sometimes psychedelic way. When I started to actually go to concerts, then it really became about the orchestra and the great pieces of music history and the composers.

Did you start getting into DJ'ing when you went to New York to enroll in the Columbia–Juilliard program?

That’s right; there wasn’t a lot of DJ'ing going on in Virginia. In New York, I actually bought a turntable, and my roommate, Eric Huebner (now a great new-music pianist), bought another one, and we started doing some mixing, and he said, “Let’s go check out these spaces on the Lower East Side.” The club music had this driving, completely visceral, almost animal energy to it, but what I liked was the more abstract electonica coming out of the U.K., which was as interesting as any subgenre of jazz or rock. When you don’t have a vocal line giving you a melody and lyrics, the music elements of the pieces have to really step up.

I’ve always been interested in taking a listener on both a musical and emotional journey, and I love it when a piece can work on different levels, like Desert Transport.

Did you get paid to DJ?

That really didn’t happen till I came out here, in 2001, because my girlfriend (she’s now my wife), Jamie, was out here. The electronic scene out here had always been very strong, especially during the dot-com years, because there was just an incredible volume of parties and events happening. But what’s always been ironic to me is that I’ve always found the thing that best supported me was writing for orchestra. A fair amount of DJ'ing I do right now is related to Mercury Soul, basically large events that combine DJ'ed elements and classical performances, like a large party. We’ve done it in Miami at the New World Symphony’s new Frank Gehry–designed concert hall, and in Chicago at warehouses. And I just came back from Portugal, where it really felt like a dream gig: The orchestra in Porto was playing several of my symphonic pieces, and they have huge DJ parties on the plaza outside. So I had a great time; it was cool. I still do a monthly DJ residence in San Francisco, at a place called John Collins, a bar/lounge/club in the SOMA district. 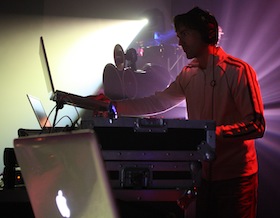 So can a DJ become a virtuoso?

I think the turntables are certainly one of the most responsive electronic instruments there is. They create space, and it’s one of those things that’s a lot harder than it looks. It’s not only the choice of the music and the order it comes in, but there are these windows of time between the tracks, when you’re mixing them, and that takes a kind of virtuosity to get that right. I’ll often have live musicians play with me, including a great guy from the Bay Area who was with me at Juilliard, David Arend [aka Marsbassman], one of the best bassists I ever met.

In your other career, you wrote Ode in 2001 as what you called “a provocative prequel to Beethoven’s Ninth.” Tell us more.

The “Ode to Joy” is always looked to as a great expression of peace and brotherhood, when we need that communication. But it was written in the early 19th century, and since then there hasn’t been a lot of peace and brotherhood. When I wrote my Ode, which was around September 11th, I thought, Wouldn’t it be interesting to have the Ode to Joy appear as if in a dream and, as the piece progresses, have it spin further and further out of control, as sort of a narrative on what happened to that hope? I’ve always been interested in taking a listener on both a musical and emotional journey, and I love it when a piece can work on different levels, like Desert Transport.

Tell us more about that latest piece, whose West Coast Premiere just happened at Cabrillo.

The chairman of the board of the Arizona Music Festival [which commissioned Desert Transport] said, “I’ve got a friend who flies helicopters, and he’d love to take us on a trip to Sedona and show us these Indian cliff dwellings.” They were thinking it would be a great way to see the [Sonoran] desert, and I was thinking, The experience of being in a helicopter would be even more exciting. So the piece basically moves from an airport hangar, where it takes off with this series of accelerandi, and it becomes more and more about the vastness of the desert, moving away from the helicopter mechanistic element. It ultimately ends up at these Indian cliff dwellings, called Montezuma Castle, which have been there for, like, a thousand ears. I was floating in the helicopter and thinking, Long after this machine is scrap, these dwellings are still gonna be here. I started researching the music of the native peoples, and this Pima melody became part of the piece.

How does it feel to have set up your own dwelling on the West Coast?

I’m doing a residency called Project San Francisco, writing a new piece for next season for the Symphony, and it’s been wonderful working not only with them but with Michael [Tilson Thomas], in different contexts. I really do feel like part of the Symphony’s family. And I personally like living in Rockridge, because I can have the neighborhoody life that’s more like where I grew up in Virginia. But I can also be in San Francisco in 20 minutes for a DJ gig.