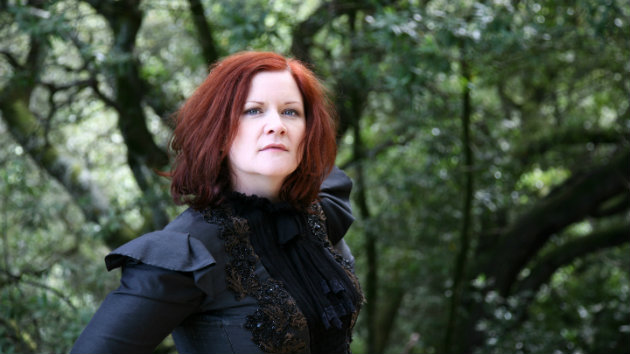 Hers is, by her own description, “music that lives in the cracks,” but that shouldn’t invoke visions of withered weeds or strange spindly insects. In fact, Lisa Mezzacappa’s composition Glorious Ravage, which premiered at REDCAT in Los Angeles last weekend and moves to the Brava Theater Center in San Francisco Oct. 1-2, is a fertile artistic cornucopia. The reflection on turn-of-the century female adventurers involves four filmmakers, deploying video, animation, and archival film footage from the era of the adventurers, and 15 musicians, including Mezzacappa herself, who conducts and plays bass.

She earned a B.A. in music at the University of Virginia and an M.A. in ethnomusicology from UC Berkeley and has been designated artist-in-residence at Djerassi, the Headlands, and Banff. Like many in her ensemble, Mezzacappa has maintained a busy but uncategorizable musical career, leading or co-leading several groups, including the Caribbean folk band Les Gwan Jupons, and recording as leader or sideperson for several labels, including her own Queen Bee Records. Her extensive network of like-minded composers and performers is an outgrowth of her continuing activity as curator and producer. In its 2013 and 2014 critics polls, Downbeat jazz magazine acclaimed Mezzacappa as “Rising Star.” SFCV managed to catch her en route back home to S.F. from the L.A. world premiere.

Where exactly are you, Lisa?

I’m in a rental SUV, on the Grapevine, on Route 5.

That seems appropriate, since you’re the leader of the Grapevine Orchestra, which encompasses players from all over the state.

We rented the SUV because we had to bring down a lot of gear for these scattered musicians, several of who are also in the Grapevine Orchestra. Right now, in the back, there’s a standup bass, a harmonium, two or three amplifiers. Some of the other players are packed in a minivan belonging to our oboist [Kyle Bruckmann], others are flying. It’s a real family affair!

How did that premiere go?

Packed house at the REDCAT, in the same building that has the Walt Disney Concert Hall. It’s affiliated with CalArts. This is the first time that all 15 [in the musical ensemble] have been working together. We came down to UC Irvine, did a mini-residency there, and did a preview concert. We felt really ready for the REDCAT, and the films looked really gorgeous there.

Would you use the term “multimedia” for this work?

I’d use “panoramic song cycle.” Music and film were so interconnected from the very beginning. When I started work on the song cycle, the topic provided for a lot of perspective, so I knew I wanted to work with more than one moving image artist.

And you knew these artists from your work as a curator? Has that given you a perspective most composers don’t have?

That’s really an astute question. I feel like part of my work as composer is curating, putting all these personalities together and setting these collaborations in motion. I don’t separate that from the notes on the page.

What do the members of your team have in common?

Strong creative voices, as musicians and as visual artists. The challenge has been to balance, where everyone feels like they’re doing the work they want to do, but also where we are porous to each other. "The musicians are all from California, except one. I wanted to connect what’s happening in Southern California with Northern California, the virtuosic improvising musicians from both places."

And your “Grapevine” concept has you uniting forces from all over California.

Tell me more about what’s right about Fay Victor for that role.

Actually, the role was envisioned for her. When we performed for the first time, several years ago, I liked working with a vocalist who has so many different strengths, and besides that we had such great chemistry. It’s very rare to find any musician, and a vocalist especially, who is comfortable as an improviser, and who is also interested in delving into what we could call New Music.

Now you’re able to use a categorical term. How much improvisation is in this piece, and how much is through-composed?

There’s a constant interplay. There are moments when I ask the musicians to improvise to the film, other moments where I’m controlling variables, but they have a lot of choices they can make, and others that are completely notated.

In your promotional material, you’d cited [jazz saxophonist] Ornette Coleman’s album Science Fiction [Columbia Records, 1972] as an influence, and that turned me on, because that’s been a favorite of mine for decades. What you’ve said about Fay made me think about Asha Puthli, the vocalist Ornette chose for Science Fiction, even though he rarely, if ever, worked with singers and lyrics elsewhere.

That really means a lot, that you know that record and like it. I was just telling my ensemble the opening piece in my song cycle comes directly from the feeling I got from “All My Life,” the song Asha sings on that album. There’s an intimacy with her voice, and at the same time this swirling panorama of sound, and with the horns entering, you feel like they’re just lifting her up on this wave of sound.

Why hasn’t there been more of that over the last four decades?

Because there aren’t that many vocalists working in that kind of medium. People don’t realize how flexible they are. Even in jazz, there aren’t a lot of expansive pieces like that, with voice, maybe just a few, with people like John Hollenbeck. 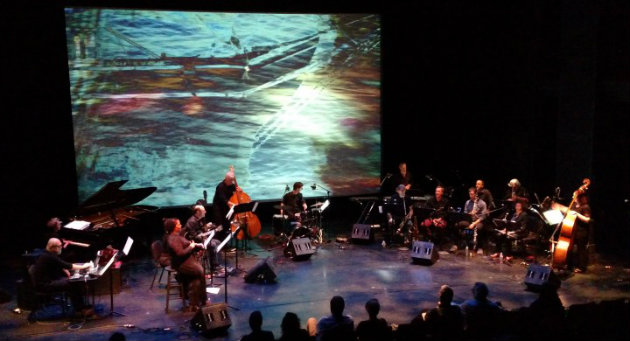 It seems like jazz may have gotten stuck in some of its own conventions.

Funny you should mention that, because I was just talking with a fellow composer about the term “jazz” and how much I can fit myself under that umbrella. I feel my sensibilities and training come from that, but the jazz establishment is stuck in terms of what’s possible. There’s a tension between the work I want to make and how the jazz world views that. Is it contemporary music? A multi-media performance? It’s hard to figure out.

And between you and classical music? Any possibility of your drifting closer to the concert hall?

I feel like too many of my ideas are outside the realm of people trained in that tradition. But I’d like to figure out how to get access to those ears who might be interested in my working with them. It would be incredible to work with the San Francisco Symphony, even on some auxiliary chamber music program or in multi-disciplinary work. It’s just sometimes hard to figure out how to be discovered by the right people.

It’s one of the reasons I decided to do this project, and I’m sort of self-producing it. I’ve been the fundraiser, the publicist, the graphic designer, the technical director, everything! I guess I felt I wasn’t at a stage where people were going to ask me to do a work like this, so I just needed to do it, and show them I could. "A lot of these women were well-educated, big personalities with a lot of gumption and a lot of ideas about how they wanted to live their lives differently. Some of their prose comes out as musical, evocative, and cinematic."

That sounds in keeping with the women who were the inspiration for the story of your piece, which I’d like you to summarize.

When I first decided to write something for Fay, I thought, I haven’t really written lyrics before, where is this gonna come from? So I was thinking about her coming west, from Brooklyn. I’d also traveled west, when I moved here from New York (and that was life-changing), in 2001. So I actually started reading pioneer women’s journals, diaries, and letters home. It was mostly accounts of how terrible things were. One thing led to another, and I found these European women who were writing, at about the same time, Victorian Era ladies. A lot of these women were well-educated, big personalities with a lot of gumption and a lot of ideas about how they wanted to live their lives differently. Some of their prose comes out as musical, evocative, and cinematic.

Their stories started to resonate with me because of their perspective as outsiders, doing things with no precedent. So I would distill out some feeling, and write a piece about it.  The title of the piece, Glorious Ravage, comes directly from a letter home which [19th-century explorer] Isabella Bird wrote from Hawaii. She was describing a moment where she had finally gotten to this place where she was utterly herself, and everything was full of possibilities.

It makes me think about what Alejandro Carreño, the concertmaster of the Simón Bolívar Orchestra, said to me about the relevance of the message of Beethoven’s Ninth for our times.

History teaches me on a personal level, like, how do we deal with the baggage of our past? All these women were basically riding on the wave of this colonial system, white rich people who were going around the world. How do I deal with that?

Are there lessons for today’s women?

I think a lot of young women might not realize how much work was done before, what it was like to break through. I’m 40, and most of us came up not playing with other women, but now it’s changed. Women are coming to this kind of music that lives in the cracks, from a lot of different places. I grew up playing in concert bands, and then I played in rock bands, with guys. [Women in her ensemble] are classical musicians who started to play in pop bands, or country fiddle music.

Does that mean it’s easier for a man to pick a path and stay on it?

Maybe it’s just that you only know what you can see. A lot of young men who are interested in music can see how to do that, because it’s been modeled for them. Bot a lot of the women I work with had to find their path on their own, which I think may also be the thing that connects them to the women whose stories I’m telling.

You’ve described Glorious Ravage as “a culmination of creative efforts over more than a dozen years,” and more specifically as an extension of your residencies at the Headlands and of performances earlier this year at the de Young Museum.

That was very deliberate, because I have a sense of how I work best, which is incrementally. I wanted to be able to problem-solve with these musicians over this long period of time. And some of the conversations I had with audiences were so illuminating, they really set the stage for finally finishing the work.

[Chuckles] Well, I hope to sleep first, after the adrenaline wears off. But we’re getting nice documentation on video, so I’m hoping I can put something together to present to larger institutions around the country and at festivals. This would be an amazing project to travel with, to connect with other smaller populations of musicians. And then also, I’ll probably just do a solo project.

Just you and your bass?

Yes, and no e-mails, no spreadsheets. [Laughs] Just a little more private.