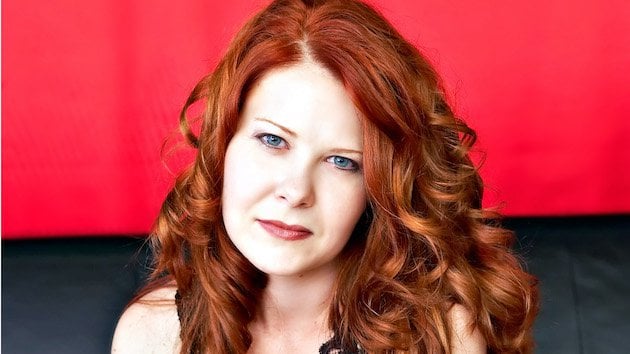 Lyric coloratura soprano Nikki Einfeld is very busy. In addition to a demanding rehearsing, performing, practicing, and teaching schedule, she is also the mother of two young girls, and keeps herself in shape with ballet, running, and meditation. “I tend to keep myself on a really strict schedule because it is the only way I can get everything done,” said Einfeld as we sat on the couch and chatted at her home in San Rafael. Fresh off two performances as a soloist in the world premiere of Abraham in Flames, a chamber opera by Niloufar Talebi with music by Aleksandra Vrebalov, she is deep into rehearsals for her upcoming roles in From the Field and Artemisia, two world premieres with Left Coast Chamber Ensemble that will also be presented at Z Space on Saturday, June 1 and Sunday, June 2.

Known as a champion of new musical works, Einfeld, 41, has worked with many Bay Area groups, including West Edge Opera, Opera Parallèle, the Empyrean Ensemble at UC Davis, and Left Coast Chamber Ensemble, which invited her to become a member (the only singer) two years ago. “It is kind of a little niche that I have begun to explore pretty seriously,” said Einfeld. I love the process of building a new piece from the ground up and being the footprint. Sometimes it’s really rewarding and sometimes it’s terrifying, depending on the piece,” she added with a laugh. “I think the challenge keeps me really sharp as a musician and keeps me evolving.”

In the upcoming From the Field, composer Christopher Stark's one-woman opera, Einfeld portrays Dorothea Lange, a Depression-Era photographer who was influential in bringing change to the conditions of migrant workers who fled the Dust Bowl to try and find work. “We are focusing on that era of her work and the trouble that she came up against trying to take these realistic photographs,” said Einfeld. “There will be lots of projections of her work and a really interesting section about climate change at the end. It all weaves together and is really beautiful — I’m really excited about it.”

Einfeld also performs traditional and Baroque music, and along with appearances in Canada, she has been a featured soloist with many local symphonies  as well as the San Francisco Symphony, where she has two upcoming appearances — as the soprano soloist in Carl Orff’s Carmina Burana on June 4, and as one of the characters in the semistaged production of Ravel’s The Child and the Magic on June 27, 29, and 30. She explains that her work in contemporary music has benefitted her classical repertoire.

“I feel that because I am keeping myself sharp and constantly expanding my ability to read music and expand my tonal centers and keep myself rhythmically able, it’s not only a good personal challenge, but when I do go back to singing Mozart and Verdi, it keeps me really honest about what they wrote — the harmonies and melodies and rhythms that they wanted to hear.”

Born and raised in Manitoba, Canada, Einfeld grew up singing folksongs with her father, who encouraged her to sing her first solo pieces in church. She began acting in school plays, playing flute and piano, and studying voice, and got accepted into the University of Manitoba as a voice major. “I wanted to do something related to vocal music and drama,” said Einfeld. “Theatrics have always been my passion.”

After studying voice seriously with internationally acclaimed coloratura soprano Tracy Dahl at college, Einfeld became clear about her future. “When I really started studying and taking voice lessons, it was apparent that my voice had this extension that you need to be able to sing the coloratura repertoire, and as I built on that and kept growing as a vocalist, it called to me — I just accepted it, and went on that path.”

After college, Einfeld was accepted into the prestigious Merola Opera Program in San Francisco, and was then offered an Adler Fellowship, a residency program for “opera’s most promising young artists,” which she participated in for two years. During that time, she also met and married John Kraft, an artist and marketing and communications professional, and the Bay Area became her permanent home. “We decided to stay here rather than take him back to the coldest place on earth where I was born,” said Einfeld with a laugh. Now 15 years later, her career is flourishing.

“I think I have been very lucky to fall into a musical community that has helped me thrive,” said Einfeld, “and a lot of who I have become as an artist and what people recognize me for now has been because of the experiences creating new works and premieres.”

Although in recent years she has primarily been performing in the Bay Area and in Canada, Einfeld says that she would be happy to travel more nationally, as well as internationally. “I’m going to keep singing and performing as long as the opportunities that come my way in this really rich musical community that we live in are suitable for me,” said Einfeld. “I’m really happy doing what I’m doing — and I’m leaving all the doors open.”