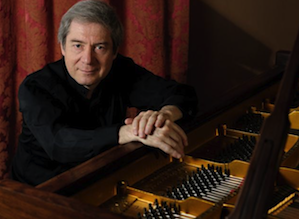 The headline over Allan Kozinn’s New York Times review of a 2011 performance by pianist Dmitri Alexeev read: “A Russian Who Ignores Those Old Stereotypes.” Kozinn praised Alexeev as “a thoughtful, poetic player, willing to go out on a limb, interpretatively,” and lamented that his recital at Mannes College was one of only a few appearances in the Big Apple. Three years later, the Moscow Conservatory–trained pianist, now himself a teacher at the Royal College of Music in London, is making his Bay Area recital debut, at the Marines’ Memorial Theatre in San Francisco and Le Petit Trianon Theatre in San Jose. Now 66, Alexeev scored international attention early in his career with a victory at the Leeds International Pianoforte Competition and a concert debut with the Berlin Philharmonic. He’s since become a favored juror at top-drawer competitions, has played numerous festivals, has collaborated with vocalists and on chamber projects, and has recorded for both Russian and Western labels. He chatted with SFCV from his London home.

What about that Times headline? Is there anything like a Russian “school” of pianism?

It’s a great tradition, and for me an important and interesting subject. For many generations, it involved highly professional training, from a very early stage. I was playing piano from the age of 5, and that was more or less standard, and that was professional playing! It was a very difficult childhood, I can tell you; we had to practice many hours, but it was getting results. It produced all these pianists: Gilels, Richter, and so on; they were products of this system. And there’s also lots of other things [connected with the Russian tradition]: mentality, temperament, and those kinds of things. But I’m afraid this high professionalism is maybe not always the case with the young Russian pianists [now]. Also: What was not the case with Russian piano-playing was this modern tendency of entertainment.

Where do you see that?

I don’t really mind how people look or dress — that’s not my business — but there’s a certain way of making music which is rather cheap, addressing the cheap part of the audience. Something more serious, I like more, personally. Now, before there were people like Horowitz, who were partly entertainment — partly! — but he was, in my opinion, a genius, in so many ways. He was not only playing all this Carmen Fantasy and Hungarian Rhapsody — which he did cleverly — but there were lots of other pieces.

Another stereotype about the Russian approach is that it’s brawny. Any validity to that?

In the ’50s, ’60s, and ’70s, there were lots of pianists from Russia — which was then the Soviet Union — who played very loud, very fast, kind of piano-bangers. But, that’s not the true Russian tradition. I would describe those pianists as Soviet pianists! That’s very different, maybe the easiest way to get first prize in a competition, but it’s not true music-making.

You won at Leeds in 1975, with some stiff competition.

The second prize was won by Mitsuko Uchida, the third by András Schiff, and the fourth by a brilliant Korean pianist, Myung-Whun Chung, who became a famous conductor later. People in England still remember this competition as one of the most memorable, because the standard was very, very high.

If you could return to that scene as an objective juror, would you also have awarded yourself first prize?

That’s very difficult to say [chuckles]. But it was a unique case at Leeds, with the first prize awarded unanimously. I remember I met Rosalyn Tureck, the famous Bach pianist, afterwards, and she told me she liked my playing, and that it had been a very stable performance, throughout.

The Times’ Kozinn liked the “vocal sense of shape” you brought to your performance of Schumann, and I’m noting that your program here will include Liszt arrangements of vocal works by Wagner and Chopin. Please comment on the role of voice and song in your playing.

Part of the reason for my choosing that program is that the piano should sing! That’s the most important thing. After all, it’s a percussion instrument, so to make it sing, like a voice or violin, is probably the most difficult thing. And that’s what I’m trying to do.

As a teacher, how do you impart that to students?

First of all, I try to draw their attention to that aspect of music. Some of them may be very musical inside, but they don’t pay enough attention to that side of music. They’re thinking about playing difficult passages and fast notes, which is difficult enough, but they’re forgetting about the lyrical aspect, the sensitive side.

Part of the reason for my choosing that program is that the piano should sing! That’s the most important thing.

And that’s at odds with what you’ve described as the piano-banging Soviet style.

Yes, I’m sure of it. But at the same time, it doesn’t mean to just play soft all the time. For example: One of the most memorable performances of Russian music was by Van Cliburn, during his first Tchaikovsky Competition, in ’58.

Yes. I was flabbergasted. It just shook my world, really.

Did it open up your curiosity about performers from outside your native country?

Yeah, of course, but that was not the most important. It opened for me the world of great music, I would say. And quite recently, I heard again his performance from 1958 in Moscow, with Rachmaninov’s Third Piano Concerto.

Which Yuja Wang will be playing here [on March 12].

To me, it was simply unforgettable, the way Van Cliburn played with fantastic virtuosity and brilliancy. And enormous sound. But it always was very beautiful, and extremely lyrical, not a piano-banger.

What do you hear when you listen to the few recordings we have by Rachmaninov himself?

Years ago, in Russia, people said there were only three pianists in history: Liszt, Rubinstein, and Rachmaninov. And I still think this is correct. He was one of the gods, really. Of course, his best, to me, was his performance of his own music. But there were also some fantastic performances of the Schumann Carnaval, Chopin sonatas, and other things which were out of this world. His technique was unbelievable, but was not only that. He knew music inside-out, and his personality was huger, which was reflected in his performance.

What about Liszt, whom you seem to be showcasing in your recital program here?

It’s not really Liszt, though there’s one Liszt song; it’s Wagner and Schubert and Chopin.

So Liszt’s arrangements enable you to get to the other composers?

Liszt was a fantastic transcriber, because he knew piano so well; he could do anything, imitating the human voice or a whole orchestra. And he did it brilliantly.

Absolutely! I love some of Wagner’s music, but I don’t think I will ever be able to conduct Tristan und Isolde, so I decided to play it on the piano, with a brilliant Liszt arrangement. It’s very egoistic of me. And it’s the same with my favorite Chopin and Schubert songs.

How did Liszt manage this transfer?

To me, he was a genius as both a pianist and a fantastically talented composer. Still maybe underrated, because he is much more than just the Hungarian Rhapsody and the Galop Chromatique. He was really serious, and also an innovator. He went even further than Wagner, in terms of harmony and things like that. But also he was a fantastic transcriber, because he knew piano so well; he could do anything, imitating the human voice or a whole orchestra. And he did it brilliantly.

Have the circumstances for Russian musicians changed since the Soviet era?

It’s a different country, really. They were having a difficult time during the ’90s, when everything collapsed. At the moment, it’s getting more normal. Young musicians are free to travel, and there are many students from Russia studying in America, in England, in Germany. And if they can find something abroad, why not?

If I have a really good Steinway, I don’t need anything else.

Is it easier to record there, now that the government’s Melodiya label is not the only option?

Yes, now there are a lot of smaller companies, and you can just make a record on your own.

Out here, one of your recitals is being presented by the Steinway Society? Do you actually prefer Steinways in recording and performance?

What I like in Steinway is the beautiful sound. But not everything made by Steinway is equally good, unfortunately. The best examples have an incredibly rich sound, almost like the human voice. I prefer the Hamburg Steinway. If I have a really good Steinway, I don’t need anything else.