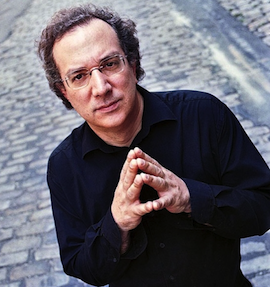 The reaction of the Internationale Gustav Mahler Gesellschaft, in Germany in 1997, to American pianist Uri Caine’s creation of Urlicht/Primal Light was a refraction of the disparate elements in his composition. Some members of the society’s competition jury were outraged at its imaginative, postmodern approach to Mahler’s music, while others ended by presenting an award to the Philadelphia native, who’d studied and performed jazz throughout his youth, and who’d dabbled in classical music in college principally to enhance his jazz career. Genre boundaries had bent for Caine in college, under the tutelage of George Crumb. He proceeded to reimagine the works of Bach, Beethoven, Wagner, Schumann, and Mozart, as well as Mahler, while at the same time performing and recording with jazz, funk, and instrumental hip-hop musicians and DJs. While serving as composer in residence of the Los Angeles Chamber Orchestra through the 2008/2009 season, Caine was nominated for a Best Classical Crossover Grammy for The Othello Syndrome, based on Verdi’s opera on the subject, which had Philadelphia soul singer Bunny Sigler inhabiting the title role.

Caine, who turns 58 this week, is currently composer in residence at Mannes College in New York City. He’s recorded extensively, including on jazz clarinetist Don Byron’s tribute to Jewish musical satirist Mickey Katz, and his latest solo effort, Callithump, releases this week on the Winter & Winter label. Caine will bring his “Mahler: Reimagined” program later this month to the Ojai Music Festival’s lineup in Ventura County and in Berkeley (Ojai North!, hosted by Cal Performances), where his ensemble will share the bill with Festival Music Director Jeremy Denk’s performance of Janáček and Schubert. He spoke with SFCV from his New York City residence.

I’ve heard your first name pronounced with both a yoo and an oo sound. Which is correct?

I’ve heard that you approached the music of Gustav Mahler partly with the mission of illuminating his roots in Jewish culture.

I had read a story about Mahler, in the Henry-Louis de la Grange biography, about how he was conducting in Prague and met a great singer at the opera. Turned out the guy was a cantor [musical leader of a synagogue] and not a professional singer. So they spent an afternoon together, where, in a way, the cantor was trying to persuade Mahler to return to Judaism, because Mahler had had to convert [from Judaism to Catholicism at age 37, to secure a court appointment], and Mahler was sort of defending himself. And when he listened to the cantor’s music, he was crying, he was moved. … The [melody of] the opening of “The Farewell,” which Mahler wrote at the end of his life as one of the pieces in The Song of the Earth (Das Lied von der Erde)I had heard at a Jewish funeral, in the Prayer for the Dead. So [in “Mahler: Reimagined”] we’re having a cantor, Don Gurney, from L.A. He sings that prayer, and we improvise around it, and then we play Mahler.

How important was Jewish culture to you, growing up in Philadelphia?

My family was immersed in Hebrew culture. My parents were not religious, but they only spoke Hebrew to my brothers and sisters. I think they thought we could move to Israel.

How much Jewish music did you get?

A lot, and from two traditions. There was the whole Ashkanazik tradition [from Central and Eastern Europe], when we did go to synagogue and heard cantors singing. I immediately understood: This is like the blues! I was surprised by the emotionalism. But in order to learn modern Hebrew Israeli pronunciation, you had to listen to the Sephardic tradition [from the Middle East via the Iberian Peninsula], so we’d listen to a lot of Yemenite and Moroccan Jewish folk music, which is essentially Arabic musical settings of psalms. The music was wild! Glenn Gould playing the “Goldberg Variations” left a really strong impression on me. Even as a wannabe jazz pianist, I was, like, “Whoa, he’s swinging hard on that record!”

And ultimately, this informed your listening to Mahler?

Absolutely! There’s a lot of musics within the music. And it allows you to emphasize those areas: klezmer music, bohemian music. It was that way with Gershwin: a combination of everything from James P. Johnson to Broadway to his view of classical music, including Rachmaninov. I made a lot of arrangements [for Rhapsody in Blue], and there’s the opening klezmer swoop of the clarinet; I just found that to be like a vehicle.

I grew up thinking that was my main thing, so I was really attuned to a lot of the pianists who played with Miles Davis, like Herbie Hancock, Red Garland, Wynton Kelly, and later people like Chick Corea and Keith Jarrett. And also with John Coltrane; McCoy Tyner, who came from Philadelphia. And much newer music, people like Cecil Taylor. I never thought of myself as a classical pianist, and I still don’t. My connection with Mahler was, I started studying composition with a teacher in Philadelphia, who asked me to make a piano transcription of the first movement of the Fifth Symphony, which, when I was doing it, seemed a monumental task. But then I got going with it, and I internalized it.

When you’re reworking the classical composers, are there historical recordings of the original music which you favor?

Glenn Gould playing the “Goldberg Variations” left a really strong impression on me. Even as a wannabe jazz pianist, I was, like, “Whoa, he’s swinging hard on that record!” Or listening to Mozart being played by George Szell, who had a record with Robert Casadesus playing the piano concertos, which just always struck me as swinging; there was syncopation and uplift. Or how Pablo Casals played Bach. Certainly, there’s a lot of classical pianists I admire now; I love [Arturo Benedetti] Michelangeli for his touch.

So how does jazz improvisation work in your takes on the classical canon?

In many ways. You can write an arrangement where you say, “You two guys improvise over C minor.” Or “over nothing.” It could just be a free improvisation, with a cue system. Other times, it’s more jazz-oriented, in that you have a piece with chord changes. If you’ve been playing with people for a while, it’s a natural development. I also try to feature people. Sometimes there’s no improvisation, or one person can be the free agent.

The ensemble you’re bringing out to Ojai, how long have they been with you?

Ralph Alessi, the trumpet player; Chris Speed, the sax and clarinet player; Jim Black, the drummer — these are people I’ve been playing with since the ’90s, not just on the Mahler, but on recordings of other projects. As the composer for The Othello Syndrome several years ago, I met [violinist] Josefina Vergara, and she fit right in. The only person we haven’t played with previously is the cantor. It’s piano, bass, drums, clarinet, trumpet, violin, and a DJ, whom I’ve been playing with for a very long time; his name is Gregor Asch, but he goes by the name of DJ Olive.

What’ll he be doing?

Sometimes he plays Mahler [recordings] against us, sometimes he punctuates certain sections with sounds. He can set the atmosphere for a new section.

You get around to an impressive variety of audiences.

I’ve had the experience of playing the Mahler at jazz festivals, at Mahler festivals, at classical music festivals, at modern music festivals, and in festivals where people didn’t even know who Mahler was! So you get to a point of saying, “This is what it is, we’re gonna go for it, and we hope you like it.” In some other cases, you can try to tailor things, if you feel that it helps the situation. It’s interesting that some of the places you show up where you think they’d not like it, they like it, and other places where you think people would be open-minded, they’re actually very opinionated: “Why would you be doing this with Mahler? Why not just play your own music?” That’s even if you try to “defend” yourself by saying, “There’s a long tradition of using music as a springboard to get to other music.” Certainly in jazz improvisation, anything is fair game.

You can’t always pick your audiences, but you can pick your players.

Some of the people who have played with me didn’t know anything about Mahler, and some have played Mahler but have opinions. When I did [his take on] the “Goldberg Variations,” some of the Baroque and classical musicians in Germany opted out. “We don’t like this, this is disrespectful.” And I don’t have a problem with that at all.

These days, how much do you play other people’s jazz or classical compositions, in their original form?

It depends. If I’m playing in front of a classical subscription audience, I have a Mahler medley, I can play a version of Mozart’s C-major Sonata. If I’m in Italy, I can play excerpts from Otello. But sometimes I can play James Brown. And it’s not just variety for the sake of variety; it’s actually stuff I’m working on. I just came home today from a week in Europe, where I went from one gig to another, and I played piano versions of some of the classical stuff I’ve done, and other stuff, ranging from a song by Thelonious Monk to Scott Joplin to totally atonal craziness.

How much has your hometown of Philadelphia figured in?

Certainly, when I was young, I was trying to enter what I perceived to be “the scene” in Philadelphia, with everyone from [jazz drummer] Philly Joe Jones and others who’d already become famous, like McCoy Tyner. There was a level to the music-making and the clubs; I’m not sure it exists in the same way today. I was working every night, and playing with so many different people in so many different places, and it wasn’t all jazz gigs. And it was an African-American city, and when I moved to New York, it was a much different shift, because that wasn’t as present; it was overwhelmed by so many other people from all over the world. And it was actually good for me: The challenges were different, and the combinations that were happening were what were exciting.

Coming out here to the Ojai Festivals, South and North, will California work a change for you?

I’d say yes, in the physical setting. And a lot of enthusiasm and open-mindedness. People have gotten in touch with me and said, “You can do what you wanna do; the audiences are really knowledgeable.” I’ve been out there with my wife, [Jan], to do some solo concerts, and I met a lot of people, and it’s definitely an audience which is informed. And that’s not always true.