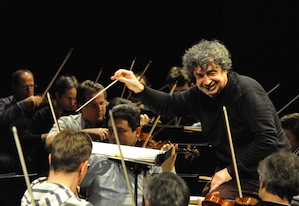 Semyon Bychkov is that rarest of musicians: a modest maestro. As San Francisco Symphony audiences know from his annual appearances with the orchestra, he is one of the finer conductors in the world today. Yet he has never sought the spotlight. Rather, he built his career slowly, step by step, his understanding of music growing ever more profound. Last year, when the Vienna Philharmonic went on a world tour, the musicians chose Bychkov to be on the podium.

Born and raised in St. Petersburg, Russia, he emigrated to the U.S. in the 1970s. (An American citizen, he lives in Paris with his wife, Marielle Labeque, half of the duo-piano team the Labeque Sisters.) He will kick off the San Francisco Symphony’s 2012–2013 season with two weeks of concerts at Davies Symphony Hall. The first, Sept. 5–8, includes Tchaikovsky’s Fifth Symphony and Bruch’s First Violin Concerto, with soloist Pinchas Zuckerman. The second, Sept. 12–15, features Dmitri Shostakovich’s rarely performed 11th Symphony (1957).

The doors have been open to you at the San Francisco Symphony for many years now. What do you like about coming to the city, and working with these players?

It’s one of the most beautiful cities in America. I’m an American citizen, but I respond to the beauty of San Francisco because I was born in the beauty of St. Petersburg, and I live in the beauty of Paris. The community has tremendous intellectual wealth, curiosity, openness, and tolerance. One sees this in all walks of life, so it’s inevitable one also experiences it in musical art. The orchestra is important to the community; if it wasn’t, it couldn’t be as good as it is. Both feed the other. All of those things make it a joy for me to be with them.

Shostakovich’s 11th Symphony is titled “The Year 1905,” a reference to a tragedy that took placed that year, in which hundreds of protestors were killed by government forces in front of the tsar’s palace. As you understand it, was Shostakovich genuinely inspired by those events? Or was he ordered to write a piece of musical propaganda?

Instrumental music is completely abstract. On the other hand, it speaks to the senses, which enables us to feel the story.

In fact, the work is closely related to the [anti-Communist] Hungarian uprising of 1956. Any time tanks of one country kill people of another — especially when it is considered a “brother country” — that disturbs decent people. Shostakovich was one of those. He was a spokesman for his people, for his time. Since Russia is not the only country where there is tragedy, he became a spokesman for all humanity.

Its portrait of a protest being brutally suppressed is certainly timely, as there are tanks attempting to crush an uprising in Syria right now.

That’s what makes it universal. It can speak to anyone, regardless of the culture or language.

When you conduct a work like this, how much weight do you give to its programmatic elements?

If I did not feel this symphony to be an important masterpiece, I would have no desire to interpret it — no matter what its program. In this case, one cannot not be aware of the program. I’m always interested to know what’s behind the notes. But it’s not the type of program where you listen and say, Here’s where the tanks turn left.

Most music has a story to tell. Some composers chose to make it known; Mahler is a great example of that. On the other hand, Brahms wouldn’t, except in private letters. But that doesn’t make his music any less programmatic. That’s the beauty of music. On the one hand, instrumental music is completely abstract. On the other hand, it speaks to the senses, which enables us to feel the story.

I see every symbol, every note, as if it were a human being. A human being, like a note, has a life to live.

I don’t know. I have lived with it for over 30 years, and recorded it twice. Audiences always respond to it. I have performed it with American orchestras on what are called “run-out concerts,” in towns that have no orchestra of their own, for people who hardly ever have an opportunity to hear live musical performances. People in those towns who know hardly anything [about the 20th-century repertoire] are deeply touched by it. This is not something that often happens with classical music of our time.

You and Shostakovich share the same hometown, Leningrad/St. Petersburg. Did you know him at all?

He moved to Moscow after the war, but he regularly came back to Leningrad, and I saw him quite often at performances when I was growing up. One of my teachers was a great friend of his. When you stand very near him and observe his mannerisms — his tics and his shyness — the music begins to speak to you differently.

On the subject of notes speaking to you, you have referred to music as “dead little symbols on a page” that mean nothing until they are played. Do you see your job as bringing those to life?

I see every symbol, every note, as if it were a human being. A human being, like a note, has a life to live. Some will have a longer life, some a shorter one; some will be dominating, others will be dominated by somebody else. This is essentially what the notes are. Putting them together is like creating a society.

There comes a moment when you become free to express music in a natural way, and not impose anything on it. You just let it unfold.

You can find full notes that are exactly the same: They represent the same pitch, and exactly the same rhythm. Does that mean they are all equal? Indeed not. How unequal is a decision one has to make. From there starts the interpretation.

Have your interpretations of some of these masterpieces changed over the years?

Yes. The music is what it is, but we change as we live longer. The more we live, it’s like a snowball, which grows as it keeps rolling. We accumulate life experiences, and you bring those experiences to the music.

Is that why so many conductors do their best work later in life?

There comes a moment when you become free to express music in a natural way, and not impose anything on it. You just let it unfold. Very talented young musicians are incredibly instinctive. That’s fantastic. Later on, in addition to the instinct, intellect plays an important part [in how you approach a piece]. Finally, there comes a mixture of intellect and instinct, which are so organically bound together that it becomes a completely natural experience. This can only happen when there is time to live. There are no shortcuts. There is no instant coffee with music.

So where are you on that journey?