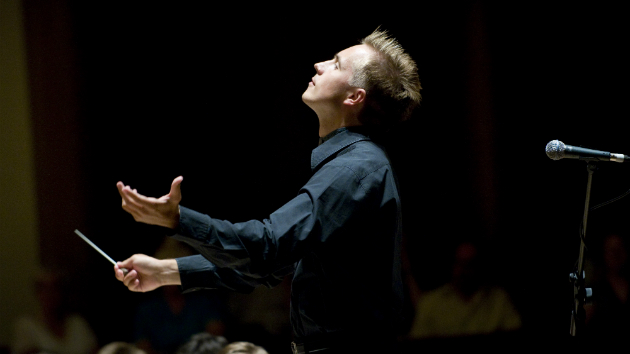 Springtime has brought accolades to Russian-born conductor Vasily Petrenko and the ensembles he now leads in the West. The Royal Liverpool Philharmonic Orchestra was shortlisted for the Royal Philharmonic Society’s Ensemble award, while Petrenko himself was shortlisted for his performance as Liverpool’s chief conductor, a post he assumed in 2009. A week later, the Liverpool ensemble was nominated for a BBC Music Magazine Award in the Orchestral category, lauding its Warner Classics recording, under Petrenko’s baton, of Rachmaninov’s Symphony No. 1. The magazine’s readers also nominated the Oslo Philharmonic Orchestra, of which Petrenko became chief conductor in 2013, in the Concerto category for an Orfeo recording of the music of Polish composer Karol Szymanowski.

Petrenko, who now lives with his wife and son just south of Liverpool, also serves as principal guest conductor of the Mikhailovsky Theatre in his native St. Petersburg, where he was trained at the Capella Boys Music School and the (then-named) Rimsky-Korsakov Leningrad Conservatory, Russia’s oldest. Now 38, Petrenko has taken on other symphonic and operatic assignments across the globe, and last year completed a cycle of recordings of the symphonies of Shostakovich for Naxos Records. The program for his guest spot with the San Francisco Symphony this week includes that composer’s 12th Symphony (The Year of 1917), Barber’s Overture to The School for Scandal, and Rachmaninov’s Second Piano Concerto with Chinese pianist Sa Chen. Petrenko spoke by phone with SFCV during a tour stop in St. Louis last week.

With the Shostakovich symphonic cycle completed, will you be more likely seen as an exponent of Russian music, and maybe innately qualified to perform it?
Well, I’m grateful for my Soviet education — and it was more Soviet than Russian — and you learn there, from early childhood, so much of Russian music. But I’m trying to avoid this feeling of just being a conductor of Russian, and I’m doing a lot of other things. Last week in Oslo, for instance, it was Scandinavian repertoire. There was a premiere of a new piece by Hellstenius, then a Nielsen violin concerto, and Sibelius’s First Symphony.

Here in San Francisco, the major part of your program is Russian. Will your Russian background be apparent in particular aspects of those performances?
Shostakovich is a composer who has been in my heart for many years. When I’m listening to his music, I immediately see visual pictures of Leningrad. So there’s a deeper understanding, perhaps, and especially in the 12th Symphony, which was a commission [in 1961], his contribution to the [Communist] Party bosses. But it’s not just an easy portrait of Lenin. I think Shostakovich calculated very precisely how much would be understood by the Party.

The first movement, Revolutionary Petrograd [the name of Leningrad immediately after the Communist Revolution], goes towards almost violence, on the edge of criminal. Then it goes towards this movement where Lenin is sitting in Razliv thinking about the future, and it gets very close to Sibelius’ Lemminkäinen poems. But Shostakovich knew by then what he could afford; he’d learned it with the Fourth Symphony [which had been criticized by the Party, and withdrawn by the composer in 1936]. I met a few people who knew him personally — musicians, some critics — and their impressions of him are also why I have a special approach.

Tell us more about that.
First of all he was a very introverted person, with very few friends, and very honest to himself and everyone else. He knew that most people were not telling the truth to him — he had a special term for them, which I don’t know whether you can publish; he called them “a__lickers.”

Your bio says you were educated at the St. Petersburg Conservatory, but it wouldn’t have been called that then, would it?
I started in “Leningrad”, and ended in “St. Petersburg” [after the city regained its pre-Revolution name, after the dissolution of the Soviet Union in 1991].

But it’s still important to you to have a post in Russia.
For many reasons, not just nostalgia. I feel obliged: The country spent a hell of a lot of money on my education, and I need to bring something in return. And I also think the general public there will not likely be able to travel abroad to see me, unlike the public of Liverpool, some of whom are coming to see me in San Francisco. In Oslo, there’s also a very loyal fan club, and some of them are coming. But most of the public in Russia just can’t afford it. Also: St. Petersburg is the city where I was born, and where a lot of my friends and my parents still live. So for me it’s like coming home, doing something good for the city and the society, and seeing what’s going on.

Traveling between your different posts, do you find differences between the ensembles?
I would say the natural way of the Norwegian mentality is a little bit more closed than, say, the Russian or the British mentality, but, at the same time, it’s more disciplined, and it gives them more ability to stay focused. Also, in Russian, in many places, they want a strong hand on top of them, a conductor who will take care not only or rehearsals and concerts, but also the rest of their lives, who will say, “Don’t drink tonight, it’s rehearsal tomorrow.” In England, it’s totally opposite: self-responsible people who don’t like anyone with a strong hand. But it’s changing. In Oslo, I tell them, “We need to get open to the public,” and I think sharing the same view collectively and individually will make a great result.

What do you tell them about your feelings about the Beatles?
I performed with Ringo and with Paul, on separate occasions, and I thought they were phenomenal. Sadly, when [McCartney] composed The Liverpool Oratorio, I wasn’t yet there, but I like his music and it’s a big privilege for me to conduct it.

And soccer?
I’m actually a fan of the same team Shostakovich was a fan of: Zenit St. Petersburg. In Liverpool there’s two main teams, Liverpool Football Club and Everton FC, and I’m visiting regularly the games of each, if I can. But I should really be a fan of the Tranmere Rovers Club, in the second division, the closest to the place where I live [on the Wirral Peninsula]. Also, their chairwoman [Lorraine Rogers] is also the chairwoman of the Philharmonic.

You played soccer as a kid?
I played on club and conservatory teams. Because of Russian [climatic] conditions, we played indoor. But I had six-days-a-week full-throttle, with studies and homework and practice and private lessons, and on Sundays there were concerts of our boys choir. So my big reward was if I had two hours to play soccer.

Any match between your performance on the soccer pitch and at the podium?
I think the similarity is that I’m enjoying both! [Chuckles] But now I’m looking forward to discovering skiing in Norway, where it’s a national sport. It’s a different country from England, and I’m glad to say that for me, the two orchestras are equally important, and I’m enjoying the benefits of both.

Do the benefits differ?
In a way yes, because of the structure of rehearsals. In Liverpool, as in most of England, it’s a tight schedule, where you rehearse twice a day for two days and then go to the concert. Sometimes you do not have enough time to absorb the music. But in Oslo, it’s more relaxed: you rehearse usually three days, and you have more time to think about the music, go in depth. Of course it’s the unions, and the whole social structures of the countries.

I’d think people will see the awards nominations for both Oslo and Liverpool as evidence of how well you work with different ensembles in different places.
It’s because of their quality, and I remember that lesson from years ago: Can an orchestra play without a conductor? Probably, though with more rehearsals. Can a conductor perform without an orchestra? The answer is yes, but that makes it a comedy show.