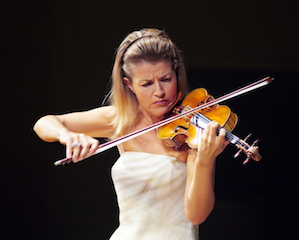 If you were scanning the crowd during Sunday night’s Oscar telecast and found a familiar face you couldn’t place, it may be because she wasn’t from the cinematic world at all. You just may have spotted Anne-Sophie Mutter.

“I have a producer friend who has asked me to attend numerous times, but it never worked out,” the great German violinist said the next morning from her hotel in Beverly Hills. “But this one was happening a few days before my recital tour was to start, so I thought, why not?”

Asked if she had fun, she hesitated before answering yes. “It’s great,” she said, “but it’s not my world.”

Mutter will be back in her world Monday night, when she joins her longtime collaborator, pianist Lambert Orkis, for a recital in Davies Symphony Hall. Born in 1963, she first received international attention performing at the Lucerne Festival in 1976, when she was 13. Over the decades, she has evolved from wunderkind to mature artist, commissioning many works and giving critically acclaimed interpretations of classic works. In an interview, she was chatty, articulate (only occasionally reaching for an English word), and, perhaps surprisingly for a huge international star, endearingly self-effacing.

Your recital will include sonatas by Mozart and Saint-Saëns, the Fantasie in C Major by Schubert, and the Partita for Violin and Piano by Lutoslawski, a work from 1984. How did you put together this program?

The key, as it has been for many of my programs this season and last, is Lutoslawski’s 100th birthday [which was celebrated in January]. He’s the man responsible for my passionate interest in contemporary music. His Chain 2 was the first piece of contemporary music I premiered, in 1986. I want to celebrate the man, and also show my gratitude to the composer who really helped me to jump into the 20th, and then the 21st, century.

We’re mixing it with old favorites of Lambert’s and mine, and expanding into new territory with the Saint-Saëns. It’s rather new for us. It gives the program a wonderful spin at the end. It’s an unusual piece: very stormy at first, then very reflective in the slow movement. The third movement is almost like a ballet exercise: very French and elegant. Then off we run. It has some of the most demanding passagework written for violin and piano.

We start the program with Mozart, a composer who has always been difficult, elevating, and challenging for both of us. With all his skills on period instruments, Lambert brings a very particular way of phrasing to Mozart’s music. When preparing for Mozart’s centennial in 2005, we went to Salzburg and played on some of Mozart’s instruments, just to get a feel for the crispness and the different reverberation in an original instrument of the 18th century. It gave me a sense of the speed that needs to be applied to even the slow movements. The deterioration of the sound is such that really long, singing slow lines are impossible on these period instruments. That gave us a totally different insight.

K. 379 is a rather unusual sonata for Mozart. It’s not in the usual three movements. It came about at a period of Mozart’s life when he was finally going to be kicked out of his court service in Salzburg. So there’s a lot of fist-shaking — a kind of bluntness of expression that you rarely find in Mozart’s music.

The Schubert is one of Lambert and mine’s favorite pieces. It has such a heart-wrenching, underlying theme that you comprehend more as you have more experience in life. When you are young, you sense what it means. When you are older, you know what it means!

You have played with Lambert for a long time. What makes you so compatible as partners?

We are celebrating in December the 25th anniversary of our first recital, in Carnegie Hall. So I’ve been concertizing with Lambert for half of my life! We have the same musical goals, although our backgrounds are very different. Lambert has played masses of severe contemporary music, for a much longer period than I have. He also has great expertise and skill in original instruments, and plays lots of repertoire I’m not familiar with.

We meet up once a year, or once every 18 months, and brainstorm through new programs. It’s wonderful to see that once we start playing together, we breathe together. There is only so much you can discuss and agree upon verbally. At the end of the day, what really counts is that you sense each other. As Mendelssohn said, “Chamber music is a conversation between sophisticated friends.” That’s really, really true. You have to listen carefully to each other. You know the subject you’re talking about, but the conversation goes in different directions during the course of an evening. You need a partner who is willing and able to follow you, musically and technically. Lambert is definitely one of those.

What happens when you disagree over the best way to play a particular passage?

We openly speak about it, and we try it out. What seems to work best musically is chosen. Sometimes we record it and listen back to it. Sometimes we go through a period where we play it on stage in a certain way, and we try some other way a week later, or even the next evening. By trying it out, we come to an agreement. We are very open-minded toward each other, and we always try out [the other’s preferred approach]. I think that’s the fairest way. Once we reach agreement, our interpretations are not always set in stone. Although we played the Saint-Saëns last season, I already have a few different ideas about it, and I’m sure he does, as well. We have a period of extensive rehearsals in front of us, even though we have already played the program. Although it will not change [drastically], there are details that will shape the arc of a piece.

Living composers are extremely open-minded, and almost grateful for varied and different viewpoints on a piece.

Are you playing much new music these days?

I need a balance. One without the other would not work. I’m looking forward to a period in my life, hopefully coming soon, when I can solely concentrate on the core repertory again. I’ve done quite a number of premieres, and I have a [Sebastian] Currier piece for violin and double bass coming out, and hopefully a violin concerto by Pierre Boulez. After that, I want to go back to expanding my repertoire [of the classics], including, hopefully, the late-Beethoven string quartets.

Do you approach a piece with the idea of putting your own stamp on it? Or is your intention to realize the composer’s vision?

Of course the composer is in the forefront. One of the things I have found in my relationships with living composers is they are extremely open-minded, and almost grateful for varied and different viewpoints on a piece. That permits me to think that attitude also applies to Mozart and Beethoven. You have to believe there are many different ways [to play a great work]. A score like the Schubert is so complex, you cannot possibly get all the details in a given evening. You have to try, every time, to show some different area of significance, but you can never grasp it all at once. That’s impossible.

Of course, [the way I perform the work] has to be colored by my personal understanding of the piece, which might be different from Schubert’s understanding. But then, when Brahms was conducting one of his symphonies in Hamburg and was asked by an orchestra members, “Why did you conduct such-and-such so fast?” He replied, “I was in a good mood!” So there is not one, set-in-stone interpretation. There is only so much a composer can leave as a written message. The rest is up to your humble reading.

And it’s important to stay humble?

Definitely. That’s probably the most important part of being a musician: knowing your place.