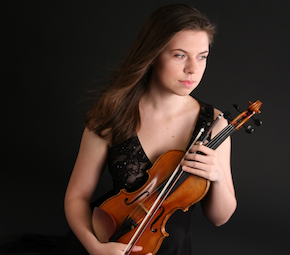 A wise and fortuitous sequence of teachers and competitive performances has ushered Tessa Lark from her childhood music lessons in central Kentucky to her win, last June, at the Walter M. Naumburg International Violin Competition in New York City, shortly after her graduation, at age 23, from the New England Conservatory. A victor four years earlier in the Irving M. Klein International String Competition, Lark returns to San Francisco on Jan. 12 for a San Francisco Performances showcase at Herbst Theatre. She chatted with SFCV during a week of work in New York.

I notice you’re holding on to your Kentucky cell phone number.

I’m still on my Family Plan. [Chuckles] But I’m based in Boston. I had an audition here in New York this morning, and I’m rehearsing with my pianist [Renana Gutman] for my concert in San Francisco. There’s a little snow on the ground, but you don’t see much of nature’s effects in the city.

So you grew up closer to Mother Nature’s bosom?

Absolutely. I lived on the same seven acres of land my whole life in Kentucky. My dad’s a wildlife biologist, and it’s a very natural wilderness.

Among the photos on your websiteis one with you standing in water somewhere. You’re evocative of one of the sirens in O Brother, Where Art Thou?

[Laughs] It’s a creek which runs right by my house. That’s the property I grew up on. And that was a cheap violin we were using. I wasn’t going to risk anything!

Of course, that setting makes me think about your reputation for amending your classical performances with bluegrass tunes. Does that come out of Kentucky?

It has mostly to do with my father, Robert Frederick (“Lark” is actually my middle name). He’s not from Kentucky, but he plays banjo, and was playing music by Alison Krauss and those great bluegrass legends while I was growing up, besides the classical radio station. So I remember bringing a mandolin into my kindergarten class for show and tell, and I actually did a little Boil ’em Cabbage Down on it. Kentucky has encouraged me to keep with it, and something that greatly influenced me was the Mark O’Connor music camps. I’ve been there four times, and what’s really incredible is that everyone is exposed to all types of music. There’s jazz musicians, swing, some rock star violinists, and he even gets great classical violinists, like Rachel Barton Pine.

Was your mom [Diane] the principal classical influence?

She’s an amateur pianist; she took lessons for about 11 years, and she would sing me lullabies at night. And she was my real cheerleader, trucking me around to all my lessons and competitions and concerts. I started violin when I was 6½, and I got really serious about playing when I was about 12.

What about that classical station?

That was from the university in my town [Richmond], Eastern Kentucky University, WEKU-FM. We got Fred Child’s program, Performance Today.

What was your violin method?

I’d been studying the Suzuki Method up till age 12, and then I met Kurt Sassmannshaus at the conservatory in Cincinnati [the College Conservatory of Music of the University of Cincinnati, about an hour north of Richmond]. That was through recommendations from somebody in Lexington; I went to audition. And he invited me to the preparatory program there [the Starling Preparatory String Project].

What was special about his method?

Have you seen his website? He has a way of explaining things which is very clear and concise, and his method teaches great discipline. You can set your schedule, to the minute, of what you’re going to practice. To have technique set up at a young age really makes life easier; it’s hard to change habits, the older you get.

Did he encourage a broad repertoire?

He has a sort of chronological order of standard concerti and sonatas; it’s repertoire that everyone will have to perform at some point. And he’s also an advocate of learning as much repertoire as you can, at a young age, because young kids can absorb things. He often had me learning a concerto a month, so I’d learn one movement a week, and memorize in the fourth week. And he also had caprices and études, and his own scale method. Theory programs, chamber music — everything. In that region, it was definitely an oasis for precollege music students.

And the Starling got you out performing?

It was completely invaluable, for everyone to play movements of concertos and have solos every now and then with the orchestra, and getting an intensive schedule and the experience of touring overseas.

… Which got you more of a hearing in China than is available to most young performers.

Mr. Sassmannshaus started his own Great Wall International Music Academy there, in 2004. He’d noticed the amazing level of musical ability of students from there, so he wanted to be a part of their training and to get them exposure and opportunities. But I’d already been there with him on tour in 2001. My first time overseas, in very rural areas, it was an incredible experience. I went back for the very first festival of the Academy, in 2004.

Did you find the approach to Western classical music different in the East?

I’m always struck by the amazing level of artistry that the Chinese students possess — real artful playing. But the audiences I remember were really loud and not well-behaved. Cell phones were answered, flaming things were given out for kids to wave around during the concert. It was more like a baseball game.

Back in the States, what have the competitions done for you?

I usually go to competitions only if the prize involves future performances. Money’s great — it gets me nicer meals for a while — but I’m interested in the connections I make. And I feel I’ve been lucky.

It seems the people I’ve encountered through these competitions are absolutely sincere, beautiful people, interested in the music and also in the persons competing. The Klein Competition has brought me back to the Bay Area several times, and I feel that I have a “family” there now: Mitchell Klein, of course, who’s given me countless opportunities, and my host family — they’re very dear friends, Tom Driscoll and Nancy Quinn. I stay with them in their beautiful home in San Francisco. They’re so generous, even to the point that they flew to New York for my Carnegie Hall debut, last November.

To have technique set up at a young age really makes life easier; it’s hard to change habits, the older you get.

What did you play?

Mostly what I’ll be playing in San Francisco [Telemann, Bartók, Mendelssohn, and Wieniawski; at Herbst, she’ll also feature Ysaÿe and Debussy]. I was actually asked by the Naumburg to play some fiddle tunes at Carnegie Hall, and I was very happy to do that.

Will you do that out here, please?

I guess if it’s asked of me, I could play some for “dessert.” [Chuckles]

What would you pick?

One is Emily’s Reel, which is my mother’s favorite, and also Bowing the Strings.

Is it a big change-up, going from violin to fiddle?

I guess the bowing technique is what is mostly different. In Appalachian-style fiddling, there’s a lot of on-string bowing, so you get this dronelike effect. Actually, my teacher, Miriam Fried, who was at my Carnegie Hall concert, commented that during the fiddle pieces my bow arm was exactly as she’d wanted it to be for the classical pieces, very relaxed. She asked me why I couldn’t play that way for my classical pieces! [Chuckles]

The fiddle makes it happen?

I can almost literally let my hair down and enjoy those pieces for what they are. It might be partly because I’m not so schooled in those areas, so I’m not as concerned about what I’m doing.

Would your approach ring true for bluegrass fans?

That would be for them to say. I’m not interested in doing a crossover type of thing. I want to present this music as it is played traditionally, and having gone to the Mark O’Connor camps is, for sure, keeping that in my mind. I do try to not play classically, per se, and I try to get down and dirty with the bluegrass.

I’m not interested in doing a crossover type of thing. I want to present this music as it is played traditionally. … I try to get down and dirty with the bluegrass.

How did your Naumburg win feel?

I felt like Miss America! That competition seemed particularly interested in the musicians, and not the showmen or technicians.

I hear you were the first American violinist to have won since 1960.

I’ve heard that, but it sounds crazy!

Has the win made a difference already?

It’s jump-starting my career. I graduated with my master’s from NEC [New England Conservatory] in May, and if I hadn’t gone to that competition, I don’t know what I’d be doing right now — playing whatever gigs I could, just to make ends meet.

But you’re still managing your career yourself?

At this point, yeah, though I’m looking for management.

What kind of audition would management have to pass for you to accept them?

They would definitely have to work with me in my continuing to play bluegrass music in concert hall settings. I’m interested in performing recital programs that showcase folk music in its traditional form, but also showing that classical composers have been inspired by that music. And I want to work towards bringing classical music to people who might not otherwise be interested in it. Going back home to Kentucky, I noticed that more classical music is playing, even in shops, and there are a lot more performance series happening, and a new concert hall in my hometown [the EKU Center for the Arts].

Would management be facilitating your recording?

They can try! [Giggles] I have some ideas and opinions about recording, but I guess I’m not really in a place to say anything. But I’ve always had this dream that I would record only live performances.

Anything else you want to talk about?

The violin I play. It’s on loan from the Steans Institute for Young Artists, a Tononi violin; it was made in the late 1600s. My teacher, Miriam Fried, is also the director of the Steans Institute, in connection with the Ravinia Festival, and she looks out for alumni of the festival who are in need. This violin has a story to tell, as if it had its own voice. I’ve had a lot of fun trying to bring out the innate qualities. There’s a sweet and sort of dark tone, kind of mellow, not always favorable for projection in a concert hall, but that almost doesn’t matter to me, just because of its very special, profound character.

Does it ask for any special repertoire?

[Chuckles] Quiet repertoire. I’ve been playing some Schubert, and it fits well.

How long do you get it for?

I was supposed to give it up a few yesterdays ago, but they’re being very kind, letting me keep it till I find a suitable replacement. I’m on the outlook. There’s something special about playing these old Italian instruments, but I could never afford one.