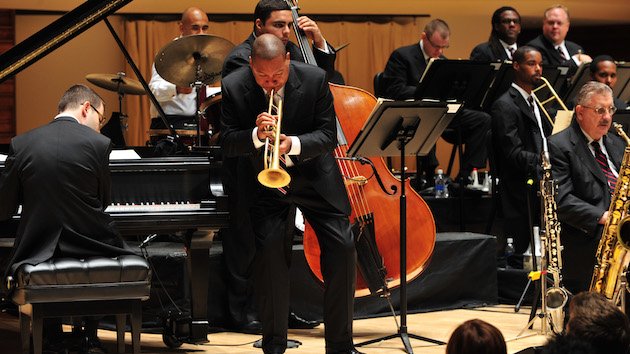 “He’s a bad cat, man,” saxophonist Branford Marsalis once commented to me about his trumpet-playing younger brother, Wynton. The adjective was, of course, complimentary. “But I don’t want to be as disciplined as him,” the saxophonist sibling continued. “That just ain’t fun.”

In the Name of the Father: Another Marsalis Great

Treme Marches Off the TV and Into the Concert Hall

Despite their differences, both Marsalises, now 56 and 55, respectively, have played significant roles in the promotion and development of jazz, as have their brothers, trombonist and producer Delfeayo (51) and drummer Jason (39). Wynton, as ambitious as he is disciplined, has the strongest name recognition, in large part because of his singular win of both jazz and classical Grammys in the same year (1984), his receiving a Pulitzer Prize for his oratorio Blood On the Fields (1997), and his dominating presence on Ken Burns’s multi-episode PBS TV series Jazz (2000).

Raised in New Orleans by Dolores and Ellis Marsalis, the latter a jazz pianist and educator, Wynton relocated to New York City to attend Juilliard (briefly) and join Art Blakey’s Jazz Messengers (with Branford), and in the late 1980’s began his association with the Jazz at Lincoln Center Orchestra (JLCO), of which he’s now managing and artistic director. JLCO’s extensive program of performance and education includes national and international tours, which will bring the ensemble to the Paramount Theatre in Oakland on Sept. 29, under the aegis of Cal Performances. He chatted with SFCV by phone from his Lincoln Center office.

I’d imagine when I ask you what you’ve been working on, it could be any number of things.

What would you like to hear about? I just gave a lecture at Harvard, it’s a followup on my series there, “Hidden In Plain Sight: Meanings In American Music”. I love the president of Harvard, Drew Faust, she’s a fantastic writer and historian and an all-around force.

And a jazz fan?

A jazz fan, and a lover of American culture.

How do you manage your multiple missions in multiple locations?

I do everything all the time, and look at all of it as being the same: Talking is like performing, and whether I’m talking or composing or teaching, it’s music.

So it all comes from the same place.

And the belief in that concept comes from my father; I was raised with that. It’s just the way he’s lived: deeply soulful, always seeking quality, philosophical about stuff, very action-oriented, not prejudiced against people or things, and not bitter. ‘Cause what we kids saw him do was struggle: He played for small audiences, we didn’t see him be celebrated, but he was not the least bitter or materialistic. He believed in the music, and this was not based on any other people’s belief. 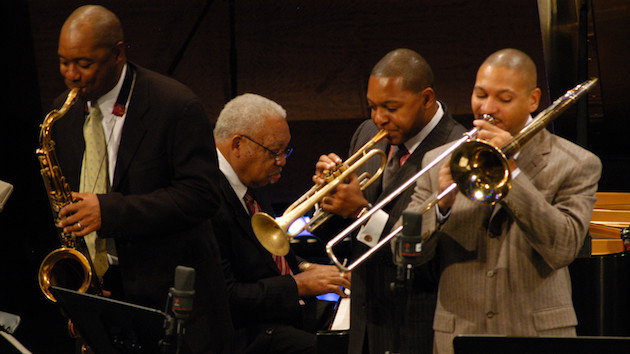 Some people have accused you of favoring only older forms of jazz, but your own musical education was more eclectic. Branford told me you and he had a funk band when you were kids.

Anybody up to the 1960s played pop music, and if they played in a jazz band, they were largely playing pop music. It was not possible to meet musicians who grew up playing Fletcher Henderson or Duke Ellington or Count Basie, because by and large that music was not available to anybody.

So you’ve made it your mission to manifest that music today?

Right, and to raise the level of musicianship through the music that we play.

How does your older book of jazz do that? 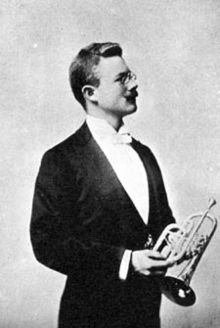 How does a trumpet player become better? By playing cornet solos from the era of Herbert L. Clarke [1867-1945] or Del Staigers [1899-1950]. How does a pianist become better? By going back to the music of Johann Bach and the Well-Tempered Klavier. We could go down the list, but what they have in common is a deep, reflective quality, and a level of technical excellence. And there’s insight into the mythologies of the cultures they came out of. Another thing they have in common is, though they can be seen as products they were not designed to be products. Duke Ellington was putting in more than just that. He was addressing fundamentals of American culture.

Have changes in American culture threatened to make those fundamentals obsolete?

How does this work in the LCJO? You’ve dubbed the Frederick P. Rose Hall, your home at Lincoln Center, “The House of Swing”. What’s the significance of that term?

It means that when you come in there, you’ll be ready to swing. You make mutual adjustments, to have a good time. A swing rhythm teaches how to play with other people, so the ‘we’ balances the ‘I’ of improvisation. Another thing, I think, would be optimism: We believe things are gonna turn out in our favor. 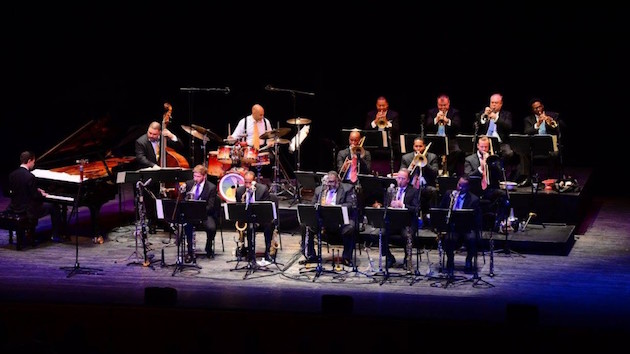 Maybe we’re in particular need of a soundtrack with those values in these mean-spirited times.

But I’ve always maintained that point of view, and it doesn’t matter who wants to attack it. Another thing about jazz is the acceptance of diversity, and integration. That’s why we had figures like [Cubans] Machito, and Chano Pozzo, who played with Dizzy Gillespie. Think about the Duke, who brought [gypsy guitarist] Django Reinhardt from France, in the early ‘40s, to play with him at Carnegie Hall. And take a look at the list of people we’ve integrated with at Lincoln Center: from Yacub Addy and Odadaa!, Ghanian music, to Chano Dominguez and Paco De Lucia, with flamenco music, to Cyro Baptista and his brilliant Brazilian musicians, and the Pakistani musicians of the Sachal Jazz Ensemble. And Garth Fagan Dance, the New York City Ballet, and the New York Philharmonic. Our music accepts people, but we have to accept them on our terms, we don’t just give up everything. We find common ground.

Both you and Branford have recorded and performed classical material, and that also goes back to your raising.

While I was eating breakfast the other day, I came upon a video of you with Kathleen Battle, on the Classic Arts Showcase on KMTP-TV. Were you swinging with that soprano and the orchestra?

All music can swing, in the broader definition of equilibrium and coordination. But in terms of swing rhythm, I never think of that when I’m playing classical music. It’s like when somebody’s making chili, they’re not thinking about the same things a person making sushi thinks about.

For your Blood On the Fields oratorio, did you draw on both your classical and your jazz experience?

I didn’t really have to combine them, because they’re already combined, say in the long-form pieces of Duke Ellington. And remember, Louis Armstrong’s favorite artist was Enrico Caruso, and Jelly Roll Morton, in his Library of Congress recordings about 'what makes jazz', said you have to have versions of classical music in your jazz. The Duke and Billy Strayhorn did that with the Peer Gynt Suite of Grieg, and the Nutcracker Suite of Tchaikovsky, and Fletcher Henderson did it with Ravel’s Bolero.

And you’ve got some classical collaborations coming.

I’m writing a symphony for the New York Philharmonic and the JLCO right now. 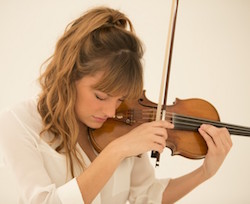 Yes, and I wrote a violin concerto for Nikki Benedetti; she’s getting ready to perform it next month with the National Symphony Orchestra. My father had the wherewithal to show me that classical is a great body of music. I was listening to Brahms’s Second Symphony just yesterday, and feeling grateful for that.

The generation you shared with your brothers and others in the 1980's were known as The Young Lions, and were credited with somehow reviving jazz. What’s happening now that you Lions are getting grayer?

I never knew where that label was coming from. If people were coming to a collective vision, maybe I would have agreed with that. You could talk about the Fauvists or the Impressionists, but in the careers of those artists, they practiced those things for a short time, then did their thing. Now, there are a lot of excellent young players, but what they’re gonna do, only they know. My only hope is that they can withstand the pressures of making everything into a product, and that out of that generation will come some actual artistry.

Cal Performances has given notice that your program will be announced from the stage of the Paramount.

Sometimes I talk with the presenters, to find out what they like. Or, what do I think the audience would want to hear? What would the band members like to play? Nine out of 15 of them have composed for us. Sometimes we change the program while we’re playing. 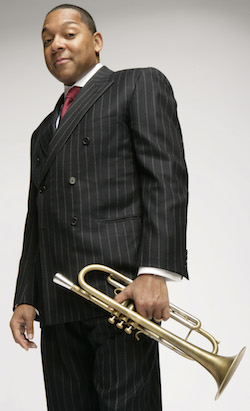 But we can rely on your being well-dressed. You’re outfitted by Brooks Brothers, as the Modern Jazz Quartet was before you. Are appearances and decorum important?

I grew up in the country, around a lot of poor people who put their suits on on a Sunday to go to church, or put a hat on. It would be stuff from J.C. Penney’s or Sears, but damn, they felt good. Am I gonna play any different because I have a suit on? No, I’m not. But these little formal things, these little touches, they add a dash of poetry to life.

Very nicely put. While you’re out here, would you be at all tempted to leave your suit in your closet and head out to a local jazz joint? Your brother Branford stopped in for a jam earlier this year.

I grew up in clubs, and in the past out there, I would always go hang with the great saxophonist Robert Stewart [an Oakland native]. I would love to maybe go out to one of those clubs. Time is getting short.