Carmina Lures You In
BY Kathryn Miller

During a season otherwise filled with the iconic works of Beethoven, Mahler, and Handel, the San Francisco Symphony Chorus under the baton of Ragnar Bohlin will explore its eclectic side on April 19. The program features Carl Orff’s hugely popular work Carmina Burana, but will also introduce listeners to the work of Lars Johan Werle, Eric Whitacre, Joseph Rheinberger, and Veljo Tormis.

Audience favorite Carmina Burana, arranged for choir, two pianos, and percussion by Wilhelm Kilmayer, earned a Grammy for the San Francisco Symphony in 1993. This time, it will feature soloists Chester Pidduck, Brian Leerhuber, and Ji Young Yang (described by San Francisco Classical Voice as having a “bright and stunningly agile” voice), as well as the Lower School Choir of Berkeley’s Crowden School.

While Carmina Burana will lure audiences, the works of the four lesser-known composers will be arguably more interesting. Joseph Rheinberger, born in Lichtenstein, wrote at the end of the 19th century, and is known primarily as an organist and composer of organ music. His Drei Geistliche Gesänge brings to mind the motets of Rheinberger’s contemporary Anton Bruckner in their densely romantic style.

The selections by Eric Whitacre (I thank you, God) and Lars-Johan Werle (trees) are both settings of e.e. cummings poems. Werle uses short, percussive phrases reminiscent of the quirky poet. I Thank You, God, on the other hand, is tuneful and sweeping. The Symphony Chorus will surely make great use of Whitacre’s soaring phrases and gestures.

Known for his large-scale choral works, Veljo Tormis often draws inspiration from Estonian folk traditions. Rather than simply setting folk tunes for chorus, however, the inspiration is more likely to come from a small phrase or gesture in a song, or even a textual reference. His extended 1972 work A Curse Upon Iron uses voices in a very orchestral manner, with speechlike phrases emerging from the thick texture. The work uses influences from shamanistic tradition to comment on what he called the “evil of war.” 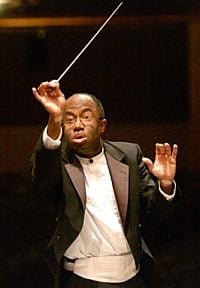 The Oakland East Bay Symphony's April 17 concert at the Paramount Theatre "pairs two composers who were revolutionaries in their time, and who changed the course of music forever," says Music Director Michael Morgan. In the case of Beethoven, it's the youthful and pathbreaking 1798 Piano Concerto No. 1 (with Sara Buechner as soloist), and from Stravinsky, it's the riotous Petrouchka ballet suite (1947 version).

In addition to new harmonies and dynamics in both works, wild rhythms are special characteristics: In the third movement of the piano concerto, syncopation reaches the point of jazz, and the adventures of Petrouchka the puppet overwhelm with arrhythmical motions on the order of Chorea sancti viti (St. Vitus' dance), just on this side of dyskinesias. Both pieces burst with colors, huge swings in mood, and waves of raw power.

Petrouchka has an important role in the history of ballet. Stravinsky composed the music for Sergei Diaghilev's Ballets Russes, which premiered it at the Théâtre du Chatelet in 1911, under Pierre Monteux — who, it may behoove young audiences to know, later became the longest-serving music director of the San Francisco Symphony, from 1935 to 1952. With choreography by Mikhail Fokine, sets by Alexandre Benois, and Vaslav Nijinsky in the title role, it's hard to get more historic. But the greatness of the occasion took decades to be appreciated, and the public had a hard time with the music, although it refrained from the outright riot that greeted The Rite of Spring two years later in the same Paris theater. (OEBS originally scheduled Rite, which requires a larger orchestra, for this program.) 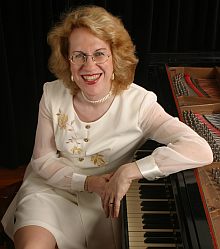 Not as well known as Wagner's "Tristan Chord," the "Petrouchka Chord" is interesting enough, with two major triads played together. Listen for this bitonality device heralding the appearance of the tragic hero of the piece.

This being Morgan's ever-contemporary OEBS, there is something new on the program. It's Mark Lanz Weiser's Four Scenes From the Story of Toccata and Fugue. The Southern California composer, 40, equally busy with movies and concert pieces, is a multiple ASCAP winner. His opera, Where Angels Fear to Tread, premiered at the Peabody Conservatory in Baltimore.

Of Four Scenes, Morgan says: "It's a short piece, a series of selections from a film score (tonal, evocative) and because it's for string orchestra, it reminds you of that other great string orchestra film score, Psycho — but without the insanity."

The film in question is Neal Thibedeau's 2007 thriller The Story of Tocatta and Fugue, whose main characters are named Gil Toccata and Andi Fugue, played by Graham Sibley and Annika Marks. ("Tocatta" in the film becomes "Toccata" in the concert program because, as the composer admitted to us: "I didn’t want people to think I don’t know how to spell that Italian word.")

To enhance further the concert's aural pomp and grand circumstances, Morgan opens the evening with Rimsky-Korsakov’s 1888 Russian Easter Overture. Note how the celebratory theme in this piece will later resonate in Petrouchka's carnival scenes. Mother Russia will be well served.

Orchestra of Fun
BY Michael Zwiebach

San Francisco Chamber Orchestra concerts are always lively affairs. Music Director Benjamin Simon conducts and emcees, and the whole atmosphere is less formal than your average orchestra concert. Still, the players are good and musical values are properly attended to.

Bach is featured on this weekend's program – the ever popular Orchestral Suite No. 2 in B Minor, with flutist Tod Brody taking us through the bravura passagework of the final dance, and the Wedding Cantata (BWV 210), with soprano soloist Anja Strauss, who has been frequently lauded by SFCV reviewers. Also scheduled is a piece by an award-winning, young composer, Michael Gilbertson, and the Schleptet in E-Flat by P.D.Q. Bach, the goofiest Bach of them all. 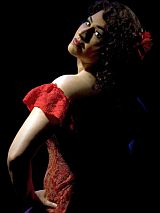 Few classical works are as recession-proof as Opera San José's next production, Georges Bizet's Carmen. Several of its melodies stand at the top of the 19th-century hit parade, while the sharply realistic ambience of its settings and the dramatic power of its story and characters have attracted a variety of directors and interpreters including, famously, Peter Brook, a giant of avant-garde theater.

Opera San José presents the work with their stable of young, highly accomplished singers, many of whom are new to the company this season, under the steady baton of Music Director David Rohrbaugh. 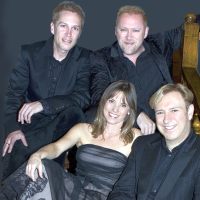 Put three-quarters of a string quartet (violin, viola, cello) together with a piano and you have a grouping that has inspired some of the greatest music of all time. The Rossetti Piano Quartet offer three marvelous examples in their concert for Music at Kohl Mansion.

Mozart's beautiful and spiritedly comic Eb-Major Quartet, K.493 shares some of the bravura and gracefulness of his opera The Marriage of Figaro, completed a month earlier, in 1786. Dvořák's guileless, melodic First Quartet, Op. 23 is an ideal partner to the Mozart. Gabriel Faurè's Piano Quartet in C Minor, Op.15 is full of Romantic emotion, but also is quite varied and has its own moments of delight. This is an excellent concert for chamber-music neophytes, but has enough variety for anyone.

FORMERLY is Present, Pointing to the Future
BY Janos Gereben
“My name is Dylan Mattingly, I’m 17 (though for only three more hours ...), and I, along with Preben Antonsen (also 17), run a local new music ensemble made up of kids our age which plays music written in our lifetimes,” said the irresistible e-mail. “Preben and I are both composers and each have pieces in 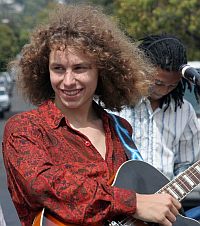 the upcoming concert, along with many other fun recent works by composers such as Arvo Pärt and Kaija Saariaho.”

The full name of the organization is Formerly Classical, but somehow “FORMERLY” has more punch, more marketing power. Let’s put “marketing” in quotes also, because its concerts are free and little or no money changes hands. FORMERLY, say participants, “is a group dedicated to the revival of excitement in classical music and the dispelling of the myth that classical music ended in 1940.” That year, besides its musicological values, may well mark the birth of some parents of the FORMERLY tribe.

FORMERLY was founded three years ago by guitarist, composer, and Classical Voice contributor Matthew Cmiel, who now studies at the Curtis Institute of Music in Philadelphia. The baton of leadership has passed to Antonsen and Mattingly, the former a pianist and composition student (with John Adams), the latter also a composer besides being a cellist, pianist, guitarist, bassist, and singer in the bands Funky Bus and the U-Turns.

Antonsen’s Thresh of Gear was recently premiered by the San Francisco Youth Orchestra. Mattingly’s many compositions include a piece performed by the Berkeley Symphony in an Under Construction concert, a short work performed in the Vox Novus program in cities around the world (including Berlin, Sydney, and New York City), and a recent piece for piano and orchestra, performed by the Young People’s Symphony Orchestra.

Smith’s orchestral works have been performed by the Berkeley Symphony, also in its Under Construction series, while her chamber music has been played around the Bay Area. She and Mattingly both study with Yiorgos Vassilandonakis.

Having quoted the top of Mattingly’s e-mail, it may behoove us to follow it to the end, just above his full — if semifictitious —signature of “Dylan Cassius Ramón Eugene Thelonious Apollinaire Mattingly”:

Pianist Jonathan Biss talks about what it's like to grow up in a family of musicians, finding time for tennis and Philip Roth, and what's in store for Bay Area audiences.

Both of your parents are professional musicians: Your mother is violinist Miriam Fried, and your father is violist and violinist Paul Biss. What was family life like growing up?

Mills College caps off its Music Festival this Sunday with a concert celebrating the reopening of its beautifully restored concert hall and the 60th birthday of Music Department Chair, Fred Frith. The composer, improviser, and guitar pioneer discusses teaching, improvisation, and what fuels his creative fire.

I’ve heard that you say that some of your students are more qualified to teach composition than you are.

Polish pianist Krystian Zimerman is known for his technical polish, recently seen here as in a performance of Witold Lutoslawski's 1987 Piano Concerto under the baton of Herbert Blomstedt. (Zomerman was the concerto's dedicatee who premiered the work at the Salzburg Festival in 1988.)

In this Cal Performances presentation Zimerman may or may not be touring with his own Hamburg Steinway piano. This allows him to do some degree of control over having to adjust to unfamiliar instruments, a regulation that may fare him well in Zellerbach Hall.

Live performances of the vast catalog of symphonic music by Russian composer Nicolai Myaskovsky (1881-1950) occur with near-hen’s-tooth frequency (only two in the last eight seasons anywhere in the U.S. or Canada).

So fans of a sound described as being between Rachmaninov and Scriabin should rush to Bruno Ferrandis’ Wells Fargo Center henhouse to see him conduct the Santa Rosa Symphony and soloist Gary Hoffman in Myaskovsky’s Cello Concerto. It has a slow movement to die for. Plus, you’ll hear excerpts from Aram Khachaturian’s Gayane and Prokofiev’s Cinderella ballets.