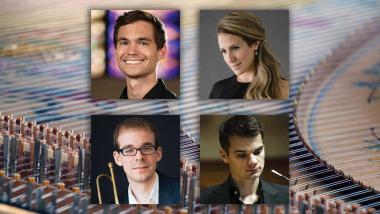 Among Bach's musicians were some of the greatest virtuosi in Germany. His trumpeters were legendary, and he directed performances by some of the finest court orchestras. "Bravura Bach" celebrates the artistry of the American Bach Soloists as they perform an eclectic sampling of some of Bach's most challenging compositions. The impetuous concerto for harpsichord in D minor, the third Brandenburg Concerto — which requires 11 superlative performers — and the brilliant vocal and trumpet fireworks of "Jauchzet Gott" celebrate Bach at his best! More magic is in store with two works by Vivaldi: "Laudate pueri" and an atmospheric concerto for bassoon titled "La Notte." Telemann's Sinfonia Spirituoso will have its first performances by ABS.