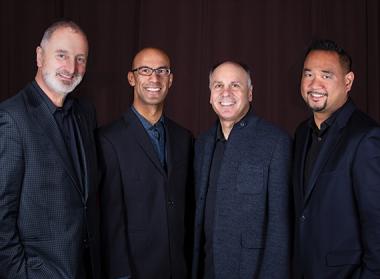 Concert with Conversation series sponsored by San Francisco Performances. Each short concert is followed by a Q & A.

The Alexander String Quartet has performed in the major music capitals of four continents, securing its standing among the world’s premier ensembles. Widely admired for its interpretations of Beethoven, Mozart, and Shostakovich, the quartet has also established itself as an important advocate of new music through over 25 commissions and numerous premiere performances. The Alexander String Quartet is a major artistic presence in its home base of San Francisco, serving since 1989 as Ensemble in Residence for San Francisco Performances and Directors of the Morrison Chamber Music Center in the College of Liberal and Creative Arts at San Francisco State University. Program includes works by Shostakovich, Ravel, and Mozart, and a special look at the recent ASQ residency with CMC’s Young Musicians Program followed by a Q&A session with the quartet.

CMC thanks San Francisco Performances for bringing these world-class artists to our stage for a free community concert!

This free event will be conducted online via video conferencing. RSVP to receive the link to join, emailed prior to the start of the discussion.