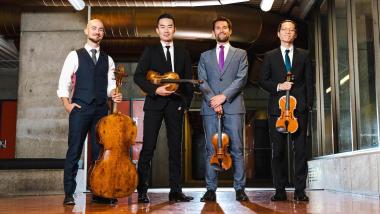 This Grammy-nominated string quartet has experienced phenomenal success.  In competition, the ensemble swept all prizes at the 2013 Banff International String Competition and were awarded grand and first prizes at the Fischoff Chamber Music Competition.  The quartet is ensemble-in-residence at the Curtis Institute and holds residencies with the Kennedy Center and other leading institutions.

….[the] ensemble opened up worlds of resonant sonority, immediately wrapping up listeners in such a spell….  San Francisco Classical Voice