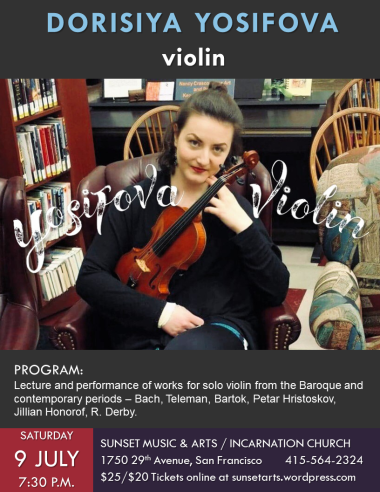 Lecture and performance of works for solo violin from the Baroque and contemporary periods.

Born in Gabrovo, Bulgaria, Dorisiya Yosifova is a San Francisco based violinist and instructor. Her musical training began very early on at the age of 5, and her first solo debut came at the age of 7 with the Gabrovian Chamber Orchestra in Bulgaria. By the time Dorisiya was in middle school, she had already committed to pursuing music for a career and was accepted to the National School of Music in Sofia. There, under the instruction of Katya Dramalieva, Dorisiya won numerous national and international competitions.

In 2015, Dorisiya completed a Bachelor of Music degree in Violin Performance from Oberlin Conservatory. There, she studied with Gregory Fulkerson and Marilyn McDonald. During her time at Oberlin, she played in orchestra and chamber music ensembles under the direction of Raphael Jimenez and Timothy Weiss. She also performed alongside the Jupiter Quartet in Oberlin’s Winter Term Intensive chamber music festival, performed at Carnegie Hall with the conservatory’s orchestra during their New York tour, and New York’s Le Poisson Rouge as part of the Next Festival. During her time at the conservatory, Dorisiya has played as Concertmaster and Principal Second with the Round Top Festival Orchestra, as well as with the Next Fest Orchestra, and in 2015 she won Marrowstone’s string fellowship award. A passionate instructor, Dorisiya was also a part of Oberlin Conservatory’s Secondary Student program and taught violin lessons to college students and other community members.

Dorisiya completed her Master of Music degree in Violin Performance at The Boston Conservatory at Berklee in 2017. During her time at the Conservatory, she took part in a string leadership masterclass for principal players with Boston Symphony Orchestra member Haldan Martinson and performed as Principal Second Violinist with multiple orchestras at the conservatory. Dorisiya’s primary teacher was Rictor Noren, with whom she studied violin and string pedagogy. Shortly after graduating, Dorisiya also became Professor Noren’s Teaching Assistant who first discovered Dorisiya’s talent for teaching.

Dorisiya currently enjoys an active career in music as a teacher and performer. As an orchestra musician, Dorisiya has performed with the Apollo ensemble of Boston as Principal Second Violinist, the Cape Ann Symphony as Section Player and the Lowell House Opera as Concertmaster. Dorisiya is also a member of the Boston New Music Initiative, where she most recently performed in a remote performance in January 2021. Before her recent move to the Bay Area, Dorisiya had a strong concertizing presence in the music community in Boston as a solo and chamber musician and performed at venues such as the Art Complex Museum, King’s Chapel, Wellesley Library and others. Enthusiastic about teaching, Dorisiya is currently on the String Faculty of the Maud Powell String Institute, Myriad Music School, MidPeninsula Music Academy and Blue Lake Fine Arts Camp. Previously, she has also taught at the Boston School of Music Arts and the El- Sistema inspired Youth and Family Enrichment Services. Additionally, Dorisiya is the Founder and Artistic Director of the Maud Powell String Institute – a string program specifically designed for immigrant children in MA.

In her free time, Dorisiya enjoys the California sunny beaches which she greatly missed when living in Boston, spending time with loved ones, and watching documentaries.