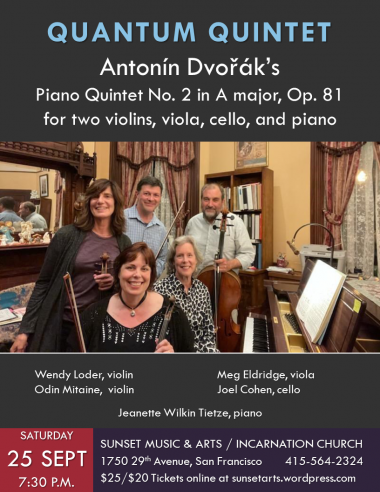 Antonín Dvořák’s Piano Quintet No. 2 in A major, Op. 81
for two violins, viola, cello, and piano

Cellist Joel Cohen grew up in Oakland, studying cello with Irene Sharp and Margaret Rowell. He finished his formal studies at the University of Western Ontario, Canada, with Tsuyoshi Tsutsumi. He did further work with Anner Bylsma in Holland. He then became a member of the Oakland Symphony, as co-principal cello for his final six years there. He left California in 1985 to go live in Vienna, Austria. While there, he played and toured Europe and the world with the Vienna Chamber Orchestra, the Vienna Radio Symphony, Wiener Kammeroper, Johann Strauss Festival Orchestra, and many other groups. Ten years in Boston had him playing with Boston Symphony, Portland Symphony, and PORT Summer opera. Joel was a founding member of Quartet San Francisco, which was twice nominated for Grammy™ awards. Now he back in California, playing chamber music, with orchestras, and as soloist in recitals and concertos.

Meg Eldridge, a Marin Native, has studied music performance at the University of Michigan, the Manhattan School of Music, and at the San Francisco Conservatory of Music. She performs regularly with the Marin Symphony, the Santa Rosa Symphony, Oak-land Symphony, Sacramento Philharmonic, the California Symphony, the Echo Chamber Orchestra, the Sound Collective, and other Bay Area groups. She plays Baroque violin and viola with the Carmel Bach Festival, Archangeli Baroque Strings, Marin Baroque, the California Bach Society, UC Berkeley, UC Davis, Jubilate, and Philharmonia Baroque. Meg performs regularly with the Tamalpais String Quartet, the Marin String Quartet, and Lawrence Strings. She also regularly plays in recording sessions at Skywalker Ranch in Marin County. In the summers, Ms. Eldridge has played at Interlochen, the Vancouver Mozart Festival, the Aspen Music Festival, the Midsummer Mozart Festival, and at the Sunriver Music Festival. In addition to music, Ms. Eldridge enjoys cooking, running, tennis, mountain climbing, and is a black belt in Aikido.

Soprano and violinist Wendy Loderhas delighted San Francisco Bay Area opera audiences with her vivid portrayals of Adele, Adina, Blonde, Cunegonde, the Dew Fairy, Fanny, Frasquita, Fiorilla, Fiordilidgi, Gilda, Gretel, Lauretta, Nanetta, Olympia, Queen of the Night, Miss Sweetsong, Violetta, The Vixen, and Zerbinetta. In February Wendy served as concert mistress with the Marin’s ECHO Chamber Orchestra and she also appears regularly with the Quantum Quartet. She is also featured as both violinist and singer on a recently released CD “Serenata”, a collection of unique music from Italy, France and Spain, also available on CDBaby.com. In addition to her performance activities, Wendy directs music for the Trinity Lutheran Church, and teaches voice, violin, and piano. She is on the faculty at San Domenico School in San Anselmo, and her students have performed with San Francisco Opera, Lamplighters, San Francisco Girls Chorus, Young Women’s Choral Project, Young People’s Symphony Orchestra, Marin Symphony Youth Orchestra, and have been featured as soloists on video games. She is happily married and the proud mother of two beautiful daughters.

Odin Mitaineis a native of France and holds double degrees in Piano and Violin. As a young violinist, he was accepted to the prestigious Yehudi Menuhin School in Surrey, England. Later, he studied at the Conservatoire Supérieur de Musique de Lyon and earned a Masters in Violin, Chamber Music, and Musical Theory while earning the equivalent of a Bachelor’s degree in Piano. He has studied the violin with Gerard Poulet, Peter Csaba, and Roland Daugareil and taken masterclasses with Fine Arts Quartet. Odin has performed throughout Europe. He worked as Associate Concertmaster at Opera de Rouen with notable conductors Oswald Salaberger, Laurence Equilbey, and David Stern. He has performed series with Opera de Paris and Radio France.Since arriving in California, he has played with different chamber groups including Echo Chamber Orchestra and worked as a piano accompanist with notable musicians. For the past several years, Odin has worked in music education teaching in several schools in the Bay Area.

Pianist Jeanette Tietze holds degrees in piano and violin pedagogy from the Hochschule für Musik, Vienna, and an MM degree in Piano Performance from SF State University, where she studied with Carlo Bussoti. Her teachers include Marcele Gallez, John McCarthy, Klara Harrer, Oleg Maisenberg and Leonid Brumberg, former assistant to Heinrich Neuhaus.Jeanette also holds a Kodaly Certificate from Holy Names University and has taught at several schools in the Bay Area.She is Organist/Music Director at Holy Innocents Episcopal Church in Corte Madera and accompanist for the Dominican Chorale and the Young Women’s Choral Project. She teaches piano at San Domenico, Marin Country Day School, and Notre Dame des Victoires, Jeanette has per-formed as soloist with several Bay Area orchestras.