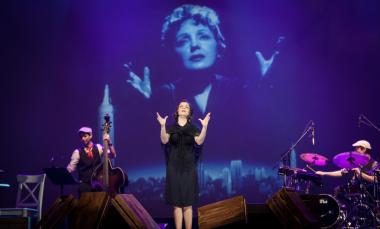 With a million tickets sold in more than 50 countries and acclaimed reviews worldwide Piaf! The Show – a musical celebration of the life and music of the legendary French chanteuse Edith Piaf – comes to Weill Hall as part of the extended world tour.

Conceived and directed by the Nice-based theatrical maverick Gil Marsalla and starring Anne Carrere, a French performer hailed as “Edith Piaf’s legitimate musical heiress,” Piaf! The Show premiered in 2015 on the centennial of Piaf’s birth. Inspired by the award-winning movie La Vie En Rose, the show narrates the rags-to-riches story of the Parisian singer’s career through her unforgettable songs, complemented by a visual tapestry of previously unreleased photographs and images of famous Parisian locations of the Edith Piaf era.

Recovering and Refreshed, MTT Returns to His Hometown Orchestra in L.A.