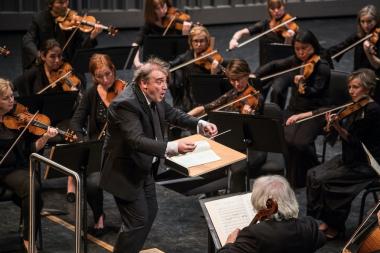 Los Angeles Chamber Orchestra (LACO), one of the nation’s premier music ensembles and a leader in presenting wide-ranging repertoire and adventurous commissions, resumes live performances with invited audiences attending concerts at two different venues beginning on June 26, 2021, at The Music Center’s Walt Disney Concert Hall, made possible by a generous leadership gift from Terri + Jerry Kohl. LACO will be the first ensemble to perform at the landmark venue since it was temporarily shuttered more than a year ago due to the pandemic. Music Director Jaime Martín conducts the Walt Disney Concert Hall concert as well as one at The Huntington’s Rothenberg Hall on July 1, 2021. Attendance at the concerts will be limited, and LACO will observe all city, county and venue safety protocols. Audience members – comprised of LACO-invited friends and family, vital community partners and others who have helped the Orchestra weather the pandemic – must have proof of vaccination. Both programs will be recorded for the second season of SummerFest, LACO’s highly regarded digital chamber music series, which will stream weekly beginning in July at no cost on LACO’s YouTube channel.

LACO awakens Walt Disney Concert Hall on Saturday, June 26, 7 P.M., with Martín on the podium conducting the full Orchestra in Alberto Ginastera’s Variaciones concertantes, featuring LACO soloists and infused with the folkloric-influenced melodies and rhythms of Argentina. He also leads Juan Pablo Contreras’ Mariachitlán, the title track on the composer’s Latin Grammy-nominated album, an orchestral homage to his birthplace, the Mexican state of Jalisco, where mariachi music originated. Martín concludes the musical journey with Mendelssohn’s evocative Symphony No. 4 in A major, “Italian.”

LACO is making available to the public a limited number of free tickets for the Walt Disney Concert Hall concert via a giveaway at www.laco.or/summerfest. Participants must be fully vaccinated to be eligible. Giveaway details are available at www.laco/SummerFest.

On Thursday, July 1, 7 P.M., LACO travels to The Huntington in San Marino, to give the first live performance in Rothenberg Hall since it, too, was temporarily shut down due to the pandemic. The centerpiece of the program is the original 1915 version of de Falla’s extraordinary sung ballet El amor brujo conducted by Martín and featuring celebrated mezzo soprano, LA’s own Suzanna Guzmán. Martín also leads Debussy’s iconic Prélude à “L'après-midi d'un faune” and the world premiere of Kimani Bridges’ The Flower.