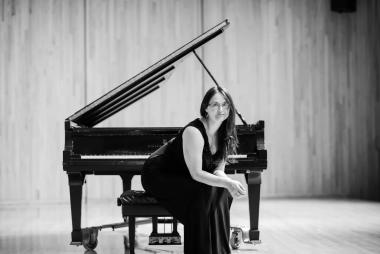 In the fall of 2019, pianist Ann DuHamel was feeling despondent about the climate crisis. Wanting to do something, she launched a call for scores, asking composers to share their works about climate change. More than 170 composers in 35+ countries sent 300+ discrete movements of music for piano and piano/electronics, on the themes of water, grief/anxiety, shadows and light, time, human “progress,” trees, hope, and more.

Pianist Ann DuHamel’s performances have been praised as poetic and “… a delight for the ears and the soul” (Encuentro Universitario Internacional de Saxofón, Mexico City). She has performed in 18 countries, including concerts at Sala Verdi in Milan, Italy; the Sibelius Academy in Helsinki, Finland; the HoGent Conservatory in Ghent, Belgium; and Trinity College in Oxford, England.

Hailed as a “forward thinking classical pianist” (Midwest Record) for her debut album Rückblick: New Piano Music  Inspired by Brahms (Furious Artisans, 2020), Ann actively champions contemporary composers, recently  commissioning works by Flannery Cunningham, Jocelyn Hagen, and Edie Hill, among others. Piano Magazine applauded “the depth of programming and playing” in Rückblick, admiring Ann’s “range of sound and full  melodic tone,” as well as her “clear voicing and vibrant sense of color.” Tracks from Rückblick have appeared on WFMT (Chicago), WRUW (Cleveland), WSMR (Tampa), WMBR (Cambridge, MA) and Minnesota Public Radio. Dr. Brahms’s Book of Rags, which appears on the album, was a finalist in The American Prize in Piano Performance, 2021, and received a Special Judges’ Citation: “Championing the Music of Marc Chan.”

Ann also appears on the 2022 release Tyler Kline: Orchard (Neuma Records, January 14, 2022), performing six works of Tyler Kline, five of which she commissioned. Fanfare magazine praised her performance as “alive … [played with] aching expression.” In demand as a collaborative pianist, Ann has performed chamber music with members of both the Grammy Award winning Minnesota Orchestra and the St. Paul Chamber Orchestra, as well as with Martha Councell-Vargas, flute; Preston Duncan, saxophone; Maria Jette, soprano; and Clara Osowski, mezzo-soprano. Her performance at Carnegie Weill Recital Hall with ensemble: Périphérie was hailed by the New York Concert Review as “outstanding,” praising the group of “superb musicians” who “played with power and assurance.”

Ann is currently Associate Professor of Music at the University of Minnesota Morris, where she devotes herself to the mission of sharing high quality traditional and contemporary classical music with students and the greater community. Prior to earning a Doctor of Musical Arts degree in piano performance and pedagogy at the University of Iowa under the tutelage of Ksenia Nosikova, Ann was Assistant Artistic Director at the Wirth Center in St Cloud, MN, for 8 years. An active member of the Minnesota Music Teachers Association for over 24 years, Ann is Immediate Past President of the organization. Some of her most important contributions on the MMTA Board of Directors include initiating a Diversity-Equity-Inclusion committee, as well as ushering forth a Land Acknowledgement to honor the Indigenous people and cultures from Minnesota.