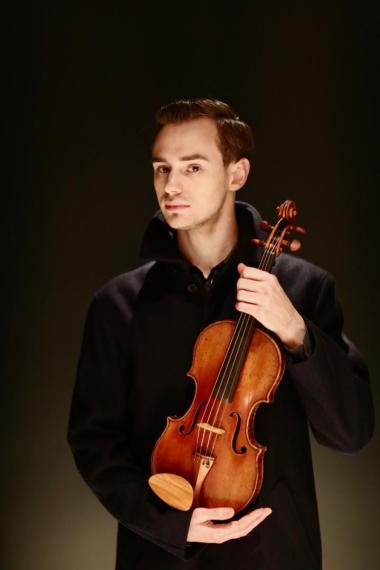 Violinist Kenneth Renshaw and pianist Elizabeth Dorman present a program of richly colorful works from the violin and piano repertoire. The program begins with an iconic work written at a low point in J. S. Bach’s personal life, after the death of his wife, through which the themes of grief, hope, and catharsis still ring true today. Gabriel Fauré’s first sonata puts the young composer on the map with its imaginative display of colors and beautiful melodies. Lili Boulanger was the first woman to win the prestigious Prix de Rome composition prize during a time when women were still discouraged from becoming professional musicians. She died tragically young at age 24 from several illnesses and a weakened immune system, but left the world with a few meaningful gems, including the Nocturne for violin and piano, written in 1911. Last on the program is Schubert’s Rondo Brillant for violin and piano, a showpiece for both instruments inspired by the Bohemian violin virtuosos Josef Slavik, containing elegance, rustic earthiness, and dazzling virtuosity.

He has since performed extensively throughout many countries, both as soloist with orchestras including the National Orchestra of Belgium, the Lithuanian National Orchestra, the Jenaer Philharmonie and the China Philharmonic Orchestra, and recitals at notable venues such as the Louvre Museum in Paris, the Mecklenburg-Vorpommern Festspiele in Germany, and the Menuhin Festival Gstaad. He has collaborated as a chamber musician with many esteemed artists including pianist Leon Fleisher, violinists Itzhak Perlman, Pamela Frank and Cho-Liang-Lin, and violist Kim Kashkashian.

Increasingly passionate about teaching, Kenneth currently serves as Teaching Assistant to violinist Itzhak Perlman and Li Lin at the Juilliard School. His students have won prizes in the Yehudi Menuhin, Leonid Kogan, and Louis Spohr International Competitions and have been admitted to notable schools, chamber music festivals, and other programs. Kenneth served as chamber music faculty at the Perlman Music Program’s Summer Music School and Sarasota Winter Residency, and the Crowden Music Center’s Chamber Music Workshop.

He holds a Bachelors and Masters degree from the Juilliard School, where he studied with Itzhak Perlman and Li Lin as recipient of the Kovner Fellowship. Other important teachers and mentors include founding Cleveland Quartet violinist Donald Weilerstein, Ian Swensen, and Lynn Oakley.

During the pandemic, Kenneth discovered his interest in pre-60s jazz, joining Sausilito-based jazz band The Hot Clams as a guest artist for outdoor socially-distanced water concerts in the San Francisco Bay. He continues to perform with them to this day.

Praised by Joshua Kosman of the San Francisco Chronicle for her “elegance and verve,” pianist Elizabeth Dorman enjoys performing music both new and old as a soloist and chamber musician. A finalist of the 2018 Leipzig International Bach Competition, Elizabeth has been widely recognized as a leading performer for her inquisitive interpretations of Bach’s music on the modern piano.

Elizabeth has appeared as soloist with orchestras including the Louisville Orchestra, the Leipzig Mendelssohn Chamber Orchestra, the San Francisco Symphony Youth Orchestra, Symphony Parnassus, as a soloist for interdisciplinary projects at New World Symphony, and will appear as a soloist with the Santa Rosa Symphony later this season. She has been presented as a soloist and chamber musician at venues including the Kennedy Center, Davies Symphony Hall, Herbst Theater, Merkin Hall, Carnegie’s Weill Hall, Leipzig’s Hochschule für Musik, and her live solo performances have been nationally broadcast on NPR and public radio. She has appeared at festivals including Tanglewood, Britt, Sarasota, Aspen, Toronto Summer Music, Icicle Creek, and Banff Centre.

Working with the Bridge Arts Ensemble, Stony Brook University, and the Ross McKee Foundation, Elizabeth has produced concerts, lectures, and workshops for music students and was honored with the Father Merlet Award from Pro Musicis for her work training high school music students in community engagement.

A native of San Francisco, Elizabeth began her training in piano and double bass at the San Francisco Conservatory of Music under Paul Hersh and Stephen Tramontozzi. She was awarded a Doctor of Musical Arts from Stony Brook University where she studied with Gilbert Kalish. Other important mentors in her musical development include Robert Levin, the Emerson String Quartet, Christina Dahl, Wu Han, Mark Sokol, Emmanuel Ax, and Arthur Haas.